Tim Farron: I was foolish to say gay sex isn't a sin 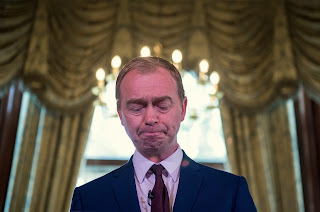 I was really pleased when Tim was appointed leader. I feel we desperately need more Christian voices to engage the culture. I was then hugely disappointed that he decided to betray his Christian beliefs on any number of issues in the course of his pursuit of acceptance and power. I think Peter D. Williams of Right to Life said it perfectly on social media yesterday: 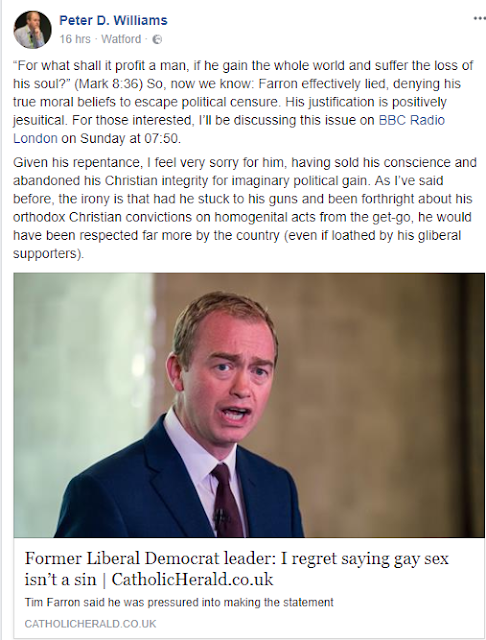 Since resigning as party leader, Tim has started doing what he should have done in the first place, providing an intelligent, articulate apologia for the hope that he bears (1 Peter 3:15). As I reported in November, he gave the Theos annual lecture for 2017 which was roundly welcomed as being excellent. Of course he still has his critics, it will naturally be among those who have so warped the Christian message that they no longer recognise the need for any sort of personal morality at all, e.g.:

Again, Tim Farron's problem wasn't being a Christian in public life (I would know). It's that he clearly held far from liberal & progressive views.

Also, gay sex is not a sin, that is perfectly mainstream theology.https://t.co/dMMBIEfrWd
— Ross Greer (@Ross_Greer) January 10, 2018

I'm sure you recall, as I do, the perfectly clear teaching of mainstream theology about the non-sinful nature of gay sex, which was a criminal act in the UK 50 years ago and homosexuality was medically classified as a mental illness. Of course, these people don't let annoying things like facts or history get in the way of their feelings or personal interpretation of the world. Of course, as Tim points out in the interview, nothing could, in fact, be more illiberal than respecting everyone else's views...As long as they're the same as yours.

Tim says he could have handled it more wisely and that Christians accept that we are all falling short of the glory of God. His argument is that Christians and the mainstream secular media are speaking different languages: no one asking those questions was remotely interested in the theology. In this he is absolutely correct. He speaks like a leader in this interview and makes some really important points, especially with respect to the counter-cultural nature of Christianity, and that we need to be careful as Christians, not to be constantly pleading victim status.


Premier has the story here.

Former leader of the Liberal Democrats, Tim Farron has spoken of his "regret" at bowing to pressure he felt to say homosexual sex is not sinful.

The Christian politician also voiced frustration that his views on sexuality distracted attention away from the Lib Dem's General Election campaigning last year.

Speaking exclusively with Premier's Inspirational Breakfast presenters John Pantry and Rosie Wright, he said: "The bottom line is, of course, I did [feel pressured] and there are things - including that - that I said that I regret.

"All they wanted to do is talk about my Christian beliefs and what they actually meant.

"Foolishly and wrongly, [I] attempted to push it away by giving an answer that, frankly, was not right."

Tim Farron also spoke of feeling "isolated" during the controversy surrounding his views but he also acknowledged the support of people praying for him.

He said: "I know that others were praying for me but there is a sense in which I was isolated.

"I had a wonderful team around me at HQ but with one exception, there were no Christians; it was not their fault they didn't understand the issue."

Intense scrutiny over Tim Farron's stance on homosexuality first ignited in July 2015 when he was repeatedly quizzed during an interview with Channel 4's Cathy Newman.

After his views on the issue drew renewed attention from journalists in the weeks prior to the 2017 General Election, Tim Farron told the BBC he did not believe gay sex was a sin.

Less than two months later, Tim Farron resigned as leader of the Liberal Democrats, saying he felt "torn" between his faith and job; he also admitted failings in his handling of the interest in him.

At the time, he said: "A better, wiser person than me may have been able to deal with this more successfully, to have remained faithful to Christ while leading a political party in the current environment."
gay agenda illiberal liberalism Tim Farron