Where will new Humanae Vitae direction take the Church? 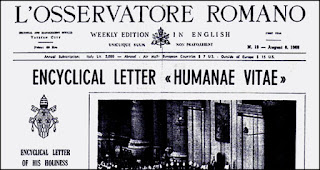 Where will the new Humanae Vitae direction take the Church? Well, we don't have to guess, because the Anglican Church already did this in 1930.

I was very pleased to see this point - about Anglicanism and the Lambeth conference - taken up by Edward Pentin in the National Catholic Register today.

As I have posted before, Humanae Vitae marked a clear break with the secular moral agenda in 1968, and shocked many who were sure Paul VI would condone use of the contraceptive pill. Once, all Christian denominations were in agreement regarding the essential indivisibility of the procreative and unitive dimensions of sexual intercourse. The Anglican communion broke away from this consensus in 1930 at the now infamous Lambeth Conference. This opened the door to a plague of moral relativism which has dogged the Anglican Communion ever since, and led to the current situation where no one is really sure if sexual morality is even relevant or important in the Anglican Church.

Rather than capitulate in the face of a modernist tide, Paul VI had the courage to stick to revealed truth. Humanae Vitae was broadly condemned. Canadian Bishops, for example, issued the Winnipeg Statement, one of the most influential post-Vatican II documents, just eight weeks after Humanae Vitae. It was about conscience relative to birth control and, as the first response from the world's episcopal conferences, there's little doubt it influenced the statements from Scandinavia, Austria, West Germany, the Netherlands, and Belgium, all of which openly amended Paul VI's absolute prohibition of contraception.

Today, with the advantage of hindsight, we can clearly see where such a path leads. According to Anglican Blogger Archbishop Cranmer, (and the 2015 British Election Study) there is no decline in the Catholic Church in this country, numbers are steady due to immigration, whereas Anglicanism will soon be obsolete unless there are some rapid changes. See here.

Despite this, despite the lessons we can learn from the Ordinariate clergy who have swelled our ranks in recent years, despite the abject failure of women priests and acceptance of divorce and all the liberal nonsense introduced by the Church of England in a desperate attempt to arrest the exodus from their pews, there is a clear desire to follow the Anglicans evident in the majority of the Catholic hierarchy, and, in my own experience, it is clearly and openly expressed by so many of our priests and people who don't seem to see where this direction leads. Is it just the end of the period of power for "the children of the sixties' revolution"? I guess when you have put all your money on a horse that comes in last, there is a real temptation to avoid reality for as long as possible?

Pentin helps us hear by offering some solid sense. He writes:

Dominican Father Ezra Sullivan, professor of moral theology at the Pontifical University of St. Thomas Aquinas in Rome, and others have noted similarities in this debate with the Lambeth Conference of 1930, when Anglican bishops passed Resolution 15 to allow contraceptive use only on clear “moral” grounds but not for “motives of selfishness, luxury, or mere convenience.” The resolution stated:

“Where there is a clearly felt moral obligation to limit or avoid parenthood, the method must be decided on Christian principles. The primary and obvious method is complete abstinence from intercourse (as far as may be necessary) in a life of discipleship and self-control lived in the power of the Holy Spirit. Nevertheless, in those cases where there is such a clearly felt moral obligation to limit or avoid parenthood, and where there is a morally sound reason for avoiding complete abstinence, the Conference agrees that other methods may be used, provided that this is done in the light of the same Christian principles. The Conference records its strong condemnation of the use of any methods of conception-control for motives of selfishness, luxury, or mere convenience.”

Father Sullivan, who said the thinking of Father Chiodi and others “is in line” with the Anglicans’ resolution, pointed out that the Anglican bishops at that time “famously declared that married couples may use contraceptives, albeit only when they ‘clearly felt’ it was a ‘moral obligation.’” Couples, he added, “were to avoid all ‘motives of selfishness, luxury, or mere convenience,’ of course.”

But he said this “defiance of traditional orthopraxy” was also an “attack on orthodoxy, for every principled change of practice necessarily entails a change in principles.”

“Essentially, Anglican bishops taught that feelings can determine morality, and that a graven image can adequately substitute for Catholic Tradition,” he added.

Soon after the Lambeth resolution, the floodgates were opened to widespread contraceptive use, separating the unitive and dimensions of marital love and precipitating today’s hyper-sexualized culture characterized by high abortion rates and same-sex “marriage.”

The Anglican communion, torn apart by issues of sexuality in recent years, has never recovered but instead has been racked by widening divisions ever since.
Anglican difficulties Edward Pentin humanae vitae lambeth conference