Cupich Punching Above his Weight? 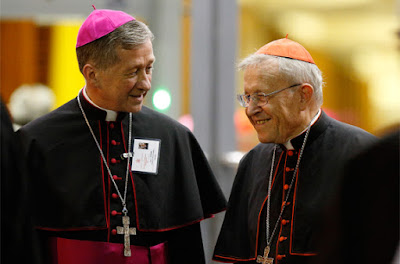 I have to admit I was impressed by his bottle to be prepared to try and hoodwink academics with such a moody talk. (Yes I did very much slip into the local vernacular there).

In his address, Cardinal Cupich called for “a major shift in our ministerial approach that is nothing short of revolutionary”. The hoped-for “paradigm shift”, the cardinal said, would be from an approach focused on “the automatic application of universal principles” to one which is “continually immersed” in “concrete situations”.

In a question-and-answer session after the cardinal’s lecture, the historian and philosopher Professor John Rist suggested that “the Pope’s ‘paradigm shift’ should be recognised as an attempt, under cover of offering solutions to genuine social problems in Western society, to impose on the Church radical changes of doctrine”.

Cardinal Cupich replied that those with such concerns should ask themselves: “Do we really believe that the Spirit is no longer guiding the Church?”

That is such an important question, and, indeed it is the question on many faithful Catholic's lips presently (or if not on their lips, in their minds). I think, of course the Holy Spirit guides the Church, but Cupich's vision is not the Church, it is something very different from the Church. Does the Holy Spirit guide those who seek to work against the Church seems a more pertinent question. I am reminded of St. Paul's Second Letter to the Thessolonians, where he states:


"stand firm & hold to the traditions which you were taught by us, either by word of mouth or by letter."

and at the beginning of his letter to the Galatians:


"I am astonished that you are so quickly deserting him who called you in the grace of Christ & turning to a different Gospel - not that there is another Gospel, but there are some who want to pervert the Gospel of Christ. But even if we or an angel from heaven should preach to you a Gospel contrary to that which we preached to you, let him be accursed"

I think it is pretty obvious how St. Paul would react to Cupich's proposals about "paradigm shift".

Professor John Rist was present at the address. He is a Professor of Classics Emeritus at the University of Toronto and holder of a Chair in Philosophy at the Catholic University of America in Washington, D.C., native of the UK and a life member of Clare Hall, Cambridge University as well as being a convert to Catholicism from agnosticism. According to Lifesite News, Rist commented on Cupich's address that "the Church is indeed guided by the Holy Spirit, via good Catholic souls such as Cardinal Burke and many others.


“I regard this papacy as a disaster and Bergoglio as possibly — because of his tampering with established doctrine — as possibly the worst pope we have ever had,” he said.

Dr. John Rist shreds Cupich and tells it like it is. Note how the serious intellectual firepower is all on one side of today's debates. None of the cronies in Rome can even make a valid syllogism if you look at their work (and what's worse, they don't even want to).

You may disagree with Professor Rist, but my point is this: have we ever had this sort of response to a Pope before? Has there ever, in history, been a pope who so offended faithful Catholics? Who so affronted the peace of quiet, faithful, intellectuals & academics in quite such a visceral way?

Whether you support the reforms and changes Pope Francis is trying to force on the Catholic Church or not, you must certainly be able to recognise the very real distress, pain and anger he is eliciting from a broad spectrum of the faithful.

Funny to think that if Benedict had remained pope, then @CardinalBCupich would still be bishop of Spokane, and probably told off by the CDF.
— Eccles (@BruvverEccles) February 18, 2018