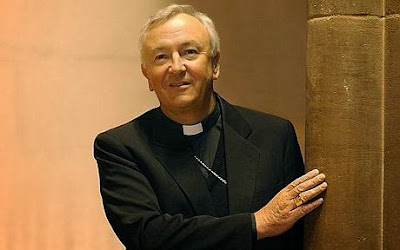 The Daily Mail reports that, in a speech to London school leaders last month, Cardinal Vincent Nichols told an audience of head teachers that pupils may question their identity, but schools could not ignore the sex they were born into.

According to the Mail he said children were not simply individuals who could do as they liked, but were part of a wider community that had ‘firm points of reference’.

In his speech Cardinal Nichols – Chair of the Bishop's conference for England and Wales – appealed to a ‘common sense of humanity’ to counter a growing individualism in relationships, family life and sexuality.


‘At a time of great confusion about the rules of sexual behaviour, about exploitation and abuse in every part of society, some firm points of reference already built into our humanity at its best are of vital importance.

'In an age of fluidity, even in gender identity, and at a time when the response to “difference” is to become closed in a self-selecting world of the like-minded… such foundations are so important. They affirm that there are “givens” which come with birth…

‘They help us keep hold of the reality that we are not single, self-determining individuals but members of a great family, with all its trials, diversities and struggles, and within that family, not alone, will we find our greatest joy.’

This intervention is very late, coming after the dreadful Catholic Education Service guidance document which presented scandalously anti-Catholic positions on homosexuality and transgenderism, but most welcome and speaks to a real need for the clear exposition of Catholic teaching on this issue.

The Daily Mail also draws attention to the lateness of this intervention because more than one head teacher has told children to use the ‘preferred pronouns’ of pupils who did not identify as female. See here, and here for example.

The fact this is reality seems to me to clearly demonstrate that the bishops are failing in their duty to address this issue. The fact that Cardinal Nichols has now reaffirmed Church teaching in this area highlights this failure further, like closing the stable door after the horse has bolted, however I am glad that he has said something.

It is interesting that, though this has been reported by the Daily Mail, there is no evidence of it on any Catholic newsource and certainly I cannot find it on either the Catholic News site, the CEW site or the Diocese of Westminster site or the respective social media news feeds. (The Catholic Herald have reported it this morning, see here).

The Mail reports that the Catholic Bishops’ Conference of England and Wales is due to discuss its official line on transgender issue next month but I have learned from sources inside the conference that a project to address the issue has been underway for some time. The word is that it doesn't look good, which makes the Cardinal's reported words even more interesting.

Some dioceses have addressed the issue and issued guidelines, for example Portsmouth. Reading these guidelines would leave you in no doubt regarding what the Church teaches in this regard, condemning collaboration with Stonewall for example, one issue the CES is guilty of in its' own guideline document. meanwhile Catholic schools in my own diocese proudly sport the "Stonewall" logo in complete contradiction to the teaching of Portsmouth diocese. Are we confused? If we are, why are we confused? Clearly because THE BISHOPS ARE NOT TEACHING!

So why do we not have a consistent message promptly delivered affirming Catholic teaching from the Bishop's conference? One can only conclude it is because the bishops are confused and divided about supporting Church teaching or abandoning it (as the Anglican's have done in this regard).

Do Cardinal Nichol's comments preempt a cohesive teaching document on this issue? Well what he said does nod in the direction of Church teaching, but it is not very clear or robust, especially when compared to Portsmouth's guidelines. We have such a reach and valuable (and coherent) intellectual tradition in the Church, why does it have to be such a well kept secret?

It was interesting to see the Bishop of Nottingham tweet the story:

Also a bit weird given the fact that Nottingham had a "Gay Mass for LGBT Catholics" at their Cathedral!

Naturally the Cardinal's comments have been condemned by various groups, and that is what we would expect; the faith is counter-cultural and calls the world to Christ. The fact that this is unavoidable should not stop the Church from speaking the truth in compassion and love, clearly and consistently. We need to hear a healthy debate and currently only the secular side of the argument is being heard. Presently, Jordan Peterson seems to be the only alternative voice!

If the bishops would get on and issue clear guidelines it would greatly help the work of evangelisation in England and Wales. While they prevaricate, more schools will hear one side of the argument only - the secular side.

Of course, Catholic teaching on this issue resonates soundly with truth, but notwithstanding the Catholic position, both science and philosophy agree with the Catholic Church in this, concluding that "sex change" is physically impossible, psychosocially unhelpful, and philosophically misguided see details here.