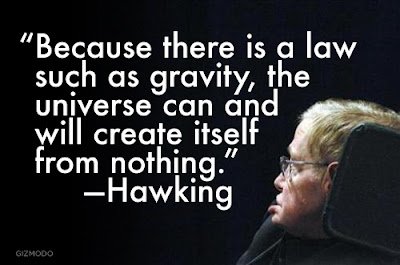 One of the clips I show the Confirmation group every year is the argument scenes from God is not Dead.


The clip I use is longer than this; a compendium of all the argument scenes, but this gets the message across. The Atheist Professor in the scene quotes Stephen Hawking to debunk the theists position. In the argument scene after this one, the theist appeals to Oxford Mathematician Professor John Lennox to debunk Hawking. Following the passing of Stephen Hawking, Lennox spoke with Ben Halbrooks of the Fixed Point Foundation over Skype. Lennox notes an interesting irony in Stephen Hawking’s Atheism, which Hawking argued for at length in his book The Grand Design. The key argument Hawking used in The Grand Design, repeated by the Atheist in God is not Dead is this:


"Because there is a law of gravity, the universe can and will create itself out of nothing."

This, of course is classic circular reasoning and the Theist in God is not Dead quotes Lennox to debunk it. Here's Lennox doing just that himself:

Lennox and Hawking, it's worth remembering, were born into a world where it was thought that the universe was eternal. That was the established science of the day. Hawking’s own work contributed to confirming that the consensus was wrong, that the universe has a beginning. For Lennox, that fitted well with his own religious beliefs. For Hawking, it was a problem. It bothered him and he tried to solve it in The Grand Design.


As for the universe creating itself from nothing, it worries me that here is Hawking claiming that he solved the problem that his own science partly created. You see, he was involved in getting to the point where there was, informally speaking, a beginning to space-time. And so there was nothing, whatever it means, before that. And so we have a universe from nothing. And so that result in mathematical physics leads to the question, How do you get a universe from nothing? And he’s trying to solve it in this book and he fails because he doesn’t get a universe from nothing at all, because what he calls nothing isn’t nothing; it’s a quantum vacuum or something else.

A universe from nothing, for materialists, may be the single largest problem, among a variety of others. Lennox observes that it takes not a jot away from the rest of Hawking’s great achievements in applied mathematics to say that when it came to this difficulty, he was unable to overcome it. After all, no one else seems to be able to do so, either.

I thought this was a great interview, it made me think of this:

"Even a fool who keeps silent is considered wise; when he closes his lips, he is deemed intelligent." ~ Proverbs 17:28

I especially like the way Dr. Lennox declined to comment on things which he had not studied or was not proficient in, as opposed to Hawking's contribution on all manner of subjects, most notably perhaps, philosophy & theology. Lennox considers Hawking’s attempt at philosophy & theology in his own book, God and Stephen Hawking: Whose Design Is It Anyway? We often see this when scientists try to critique faith, I've often thought how amateurish Richard Dawkins sounds whenever he starts making statements about religion - a subject he clearly has no understanding of (I have blogged about this a couple of times before, see here for example). As Lennox says "Outside his own field, the scientist is as dumb as the next guy".