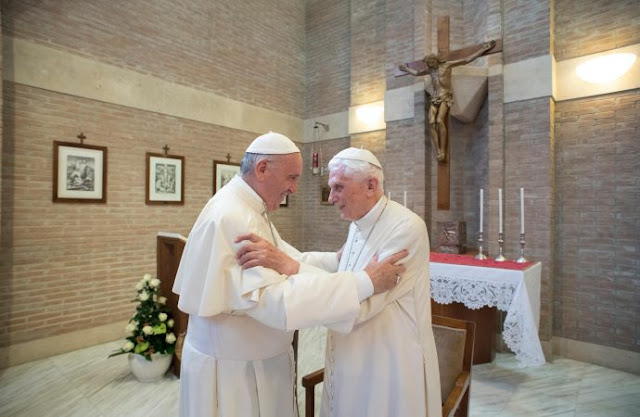 Today we pray for Pope Francis as he celebrates the fifth year of his papacy. We pray that he may faithfully guide Christ's Church.

On the eve of this anniversary, there was an extraordinary event staged which could not be seen as anything other than an attempt by this papacy to regain its' legitimacy and using the Pope Emeritus as a tool with which to do it.


Pope Benedict wanted to give a contribution, very significant as always, to the interior spiritual unity of the two pontificates.

...and thus he penned a letter, on the 5th anniversary of this disastrous papacy stating his pontificate and that of Pope Francis have an "interior continuity," albeit with "differences in style and temperament".

I have to wonder how many people believe that this could possibly be true? Does it make any sense that Pope Benedict XVI freely and proactively made such a declaration? You have to wonder if Pope Francis's goons weren't holding an electric hairdryer over his bath until Pope Benedict signed?

The main problem is the style as Antonnio Socci points out:

The language used is atypical and does not resemble the high and slight style of Joseph Ratzinger...it is very strange and unusual to read an (alleged) Benedict XVI who attacks dissonant opinions in order to defend himself “It contradicts the foolish prejudice of those who see Pope Francis as someone who lacks a particular theological and philosophical formation, while I would have been solely a theorist of theology with little understanding of the concrete lives of today’s Christian." To whom does he refer? Who would have expressed what he calls "hard, foolish prejudice"?...Moreover the sparse theological preparation of Bergoglio is an acquired fact, and not prejudice, just as it is a fact that he has not acquired a doctorate in theology (SEE HERE)

Francis is a “man of profound philosophical and theological formation”, writes Benedict XVI. So here we have a sitting CEO, as it were, seeking and promoting a letter of recommendation from the retired former CEO, five years into the job, in order to convince his workers that he is actually up to the job?

Of course it would make sense that Pope Benedict would see an interior continuity between the two pontificates if he is referring to the proclamation of the Gospel. It does not necessarily follow that he's happy with chapter 8 of Amoris Laetitia. If Cardinals Caffarra, Spaemann, Meisner, and others have expressed reservations, I'm confident that the Pope Emeritus shares them. Also, the fact that he is needed to intervene on any level tells you everything you need to know in my opinion.

Meanwhile a sudden, noticeable increase in vocal cardinals can be detected on Pope Francis ideas. Could it be that they smell a conclave?

A German Cardinal dies and the Pope's response is noticeably different in tenure:

But then you learn that he was a member of the St. Galen mafia

And then there is the matter of the ever decreasing Vatican attendance figures:

Usually the Vatican announces visitor numbers for the year in late December. But it still hasn’t done so for 2017.


If you look only at the Wednesday general audiences, the picture is even bleaker:


Then there’s the most recent papal visit:

“Compared to papal visits to other Latin American countries, the crowds are very thin, in many areas a single line of people.”https://t.co/rlfS1T3o2c
— Matthew Schmitz (@matthewschmitz) March 12, 2018

Is this the ballyhooed “Francis Effect”?
— Matthew Schmitz (@matthewschmitz) March 12, 2018