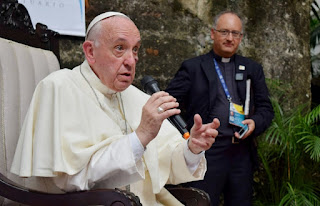 Once again Fr Spadaro, the Pope's "mouthpiece" has demonstrated his quality by his own words:

Intrigued by the image of @Pontifex as Don Quixote. Don Quixote thought he was a hero battling giants, when he was an idiot tilting at windmills. Is @antoniospadaro insulting the Holy Father, or is he just thick?
— Ben Trovato (@CCFather) February 28, 2018

Notwithstanding his literary error, Fr Spadaro's claim that the resistance is against the Second Vatican Council and not Pope Francis, is patently nonsense. As demonstrated by numerous scholars and prelates, but perhaps most notably for me, by my old Moral Theology teacher Canon George Woodall, professor of moral theology and bioethics at Rome's Regina Apostolorum university, former director of the secretariat of the Pontifical Academy for Life and Canon Law expert, who I know and trust, and who has explained how Pope Francis has misrepresented the doctrine and documents of the Second Vatican Council:


Magisterial texts in AL are distorted when quoted selectively or ignored almost completely. Repeatedly presenting conscience as the sanctuary where man finds himself alone with God (Gaudium et spes, 16) suggests it is only a private matter between the individual and God, while references to invincible ignorance and to other factors reducing responsibility risk implying that people rarely sin or are rarely culpable. Grave misinterpretations of conciliar doctrine on conscience, corrected in Veritatis splendor, are basically ignored in AL. Conciliar and papal teaching that no one can act in good conscience who disregards magisterial teaching or who treats it as mere opinion (Dignitatis humanae, 14; John Paul II, Allocution, Nov., 1988) is not mentioned. Distinguishing right from wrong by dialogue and example in families and beyond does not occur automatically; it lacks the clarity, the coherence and the justification afforded by education also on the Decalogue and on the Church’s moral teaching, necessary for youngsters to be convinced and to defend objective moral truth before their peers.

“The first method for estimating the intelligence of a ruler is to look at the men he has around him.” Niccolò Machiavelli, The Prince