Walter Kasper - If The Shoe Fits... 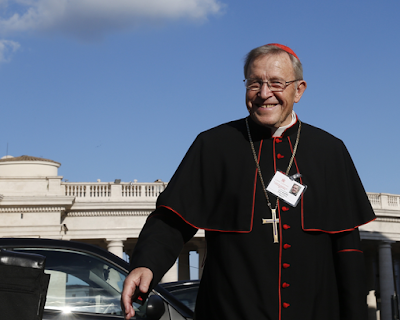 Speaking in an interview with Alessandro Gisotti at Vatican News, 85-year-old Heretic Cardinal, Walter Kasper addressed controversy about Amoris Laetitia, the pope’s 2016 Apostolic Exhortation which some (e.g. America Magazine) say includes a provision that allows some divorced and remarried Catholics to receive Communion.

“First of all I would like to say that debate in the church is necessary. There is no need to fear debate!” the cardinal said.

But he said the debate on Amoris Laetitia has become too heated—even though the “people of God” have accepted the teaching. The rest of us have been cast into the darkness then it appears. Cardinal Kasper went on:


"There is a very bitter debate, way too strong, with accusations of heresy."

One has to wonder who's fault that is?

Since at least the 1970s, principally in the German-speaking world, there has been a sustained effort to modify the Church’s pastoral practice to allow such couples to receive absolution and Communion without a required intention to change their situation. Most prominently associated with Cardinal Walter Kasper, the proposal was authoritatively rejected as incompatible with Catholic doctrine by St. John Paul II and Pope Benedict XVI, and thus expressed in the Catechism of the Catholic Church.

Pope Francis held up Cardinal Kasper as a model theologian at his very first Angelus address on March 17, 2013, four days after his election. In February 2014, he invited Cardinal Kasper to address the College of Cardinals, wherein Cardinal Kasper argued for a change in the Church’s practice.

When the cardinals emphatically rejected Cardinal Kasper’s proposal as contrary to the Catholic faith, the Holy Father himself came to the embattled cardinal’s defence, indicating that the subject would be on the agenda for two synods on the family in October 2014 and October 2015.

In August 2015, Pope Francis indicated in an elliptical way that he did not hold to the clear teaching of St. John Paul II in Familiaris Consortio (1981) and Reconciliatio et Paenitencia (1984), along with Pope Benedict’s Sacramentum Caritatis (2007). He quoted the relevant texts, but deliberately omitted their conclusive teaching on the points in question.

Father Raymond de Souza summarises the situation like this:

To date, the defenders of Amoris Laetitia have not offered arguments as much as undemonstrated assertions and appeals to authority. Without a convincing argument to demonstrate why Amoris Laetitia does not run afoul of Veritatis Splendor, which it prima facie does, attacking those who raise questions remains only a short-term political tactic.The magisterium is not, over the long term, shaped by such tactics.We live, though, in the immediate term, where such tactics have their impact.The year after the year of Amoris Laetitia will thus be one of greater acrimony and division, with those close to the Pope questioning the integrity of those who insist that, indeed, the cross of Christ has not lost its power and, in fact, remains that which makes possible the joy of love — even in the 21st century.

Now, all that said, heresy means false/ problematic teaching which serves to mislead us with regard to the things that lead to God. Let's see how a prominent Dominican explains heresy:

So what do you think? Does the shoe fit?