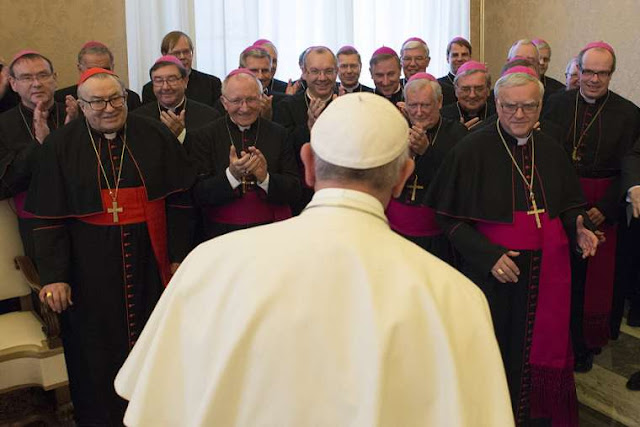 Yesterday it emerged that the Vatican had rejected the German Bishops’ Proposal for intercommunion for Protestant spouses (a.k.a. heresy).

Sources confirmed that, with the Holy Father’s approval, the Vatican’s head of doctrine had thrown out the bishops’ pastoral guide allowing Holy Communion for some Protestant spouses, but the Pope wished the rejection letter to remain secret. (It seems even when he does something right, he messes it up).

Now German bishops deny that Vatican has rejected Protestant Communion plan. The German Bishops’ Conference has now issued a statement saying the reports are “false”. They added that the Pope has agreed to meet Cardinal Reinhard Marx, the conference’s president, in Rome.

How interesting to note how Cadinal Marx gets instant access to the Pope to challenge decisions & try to force a change of outcome, but other Cardinals, Bishops and Priests can ask for meetings or write multiple letters and get no response on serious Doctrinal questions.

It certainly appears that the Church tax opens doors.

For the faithful who have committed their lives and the lives of their families to Catholic doctrine, this is nothing but a further betrayal.
German Church heresy. intercommunion