Lay initiatives continue to gain momentum in the UK...

On 24th March, the current president of the Vatican’s Pontifical Academy for Life gave a warning that it is “dangerous” to speak of the family as a “little church” and the “domestic church”.


“The Church, which is a familial Church, for me, it isn’t very clear, it’s dangerous, for example, to define the individual family as a little church...It’s very dangerous, because it can encourage an egoism of the family,”

Archbishop Vincenzo Paglia said to a group of clergy and laity gathered at the major seminary of the Mexican diocese of Queretaro. Paglia called the tendency to the “egoism of the family” a form of “familyism” and claimed that Jesus spoke against “familyism.”

These words are naturally jarring to faithful Catholics, who know that the Church has always referred to the family as the domestic Church. Lumen gentium, paragraph 11, states:

“The family is, so to speak, the domestic church. In it parents should, by their word and example, be the first preachers of the faith to their children; they should encourage them in the vocation which is proper to each of them, fostering with special care vocation to a sacred state.”

It appears Paglia is trying to say that no one family can exist in isolation, or rather that true "family" is the family of the Church, but even reading with the very best of intentions into his talk, it is clumsy and lacks consonance with consistent Church teaching. Paglia is perhaps best known for overseeing the creation of an “erotic” mural for his cathedral church so outrageous that former members of the Pontifical Academy for Life called it “blasphemous,” and even “demonic.” I have wondered how anyone responsible for such a clearly problematic action could remain in a position of authority, let alone be promoted within an institution which purports to be at odds with such things (the Catholic Church). 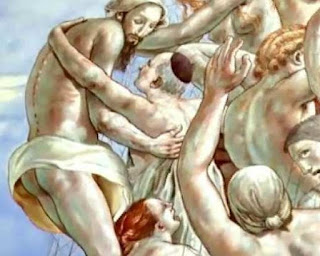 And this is not the only questionable decision Paglia has made. In his previous position as President of the Pontifical Council for the Family, Paglia oversaw the creation of a sex-ed program whose materials were so sexually explicit and even obscene that one psychologist associated with the Holy See’s Congregation for the Clergy said that Paglia should be evaluated by a sex abuse review board, and that “the pornographic images in this program are similar to those used by adult sexual predators of adolescents.”

Since his appointment by Pope Francis to the presidency of the Pontifical Academy for Life, Paglia has caused much controversy by overseeing the dismissal of many of the strongest voices for life and family from academy membership, as well as the appointment by Pope Francis of a large number of Academy members who dissent from Catholic doctrine on the inviolability of the right to life and on sexual morality. The purges have led to the creation of a parallel John Paul II Academy for Human Life and the Family (JAHLF), led by former members of the Vatican’s academy.

By extreme contrast, my wife spent the last weekend at Aylesford Priory in Kent at the Catholic Mother's Conference. This lay initiative started on Facebook as a gathering of Catholic mums to support and pray for each other. It quickly blossomed into a group of currently well over 1,600 mothers who talk about the issues facing Catholic families in the world today and develop strategies to deal with them. How do I cope as a new mum when my husband goes out to work every day and I am left at home with the kids? What is NFP? How do I pass on the faith to my children?

The weekend's conference was a roaring success with a great variety of powerful Catholic speakers, headlined by Gianna Molla and including Costanza Miriano. There was also Mass, Eucharistic adoration and a number of useful workshops. One address, by the Formation and Disability Adviser for the South-east London area, Pierpaolo Finaldi on the Domestic Church (see below). His talk is most excellent and full of the kind of essential insights that support and deepen and encourage us all to be better parents.

Catholic Mothers is one of a number of excellent, U.K. based faith initiatives which are springing up with great vigour at the moment. Of course there is the Guild of Our Lady & St. Joseph, which I am involved with and which seeks to develop Catholic fellowship and provide a conduit for formation to all in the fullness of the Catholic faith. But there is also the recently formed Signs of Life initiative which provides a number of resources to help form Catechists. Also the Humanum Institute who are holding a really important event at St. Mary's University on understanding sex and gender on July 13th this year. Obviously, if you read my blog, you will know that the desperate need for some authentic, authoritative teaching on this is something I have been clamouring for for months now, it is telling that a lead comes from a lay initiative and not from the CBEW.

My wife came home from the Catholic Mother's Conference inspired and uplifted, she told me how wonderful our faith is and wonderful and comforting it is to be with other Catholics who believe the teaching of the Church and live it every day.

In the vacuum left by a clergy who are too afraid of being criticised to preach the Gospel message, too afraid of forsaking their comfortable lives to challenge the secular mainstream, Catholic families are taking up the workload and doing it for ourselves. Catholic lay people are organising, evangelising, teaching and taking our faith into the public sphere to argue, here's another example of a lay led apostolate working with minimal backing from the hierarchy to stand against a great evil in our society:

Back in November I wrote this blog in an effort to express the sense of abandonment many faithful Catholics feel. Our greatest opposition seems often to be our bishops, who don't want us to speak up for the faith if it causes a fuss. Of course it is essential to point out we still have a few good ones, and all the Catholics I know look increasingly to these good Cardinals and Bishops for advice and support. But we are walking away from the bad ones in increasing numbers. Men like Paglia are a serious cause for great concern, their nurturing and promotion by the present Pontificate a source of grave scandal for the faithful. While these men embrace all kinds of positions that contradict the faith, we will just carry on being Catholic thank you very much. If priests and bishops won't stand with us, we will do the best we can on our own, there will always be a few faithful priests to shepherd this increasingly isolated flock. This is a sign of great hope and this is how it has always been, in times of trouble the faith is carried by the domestic Church. So do not be afraid, the faith has not changed, Christ's message is the same today as always. The Person of Jesus Christ stands at the centre of our faith and He is the Kingdom that we seek to build; a Kingdom of justice, loyalty, integrity and peace. All people are drawn always to these things because they are of God, and we are all made by God for God. So come and join us and enjoy the sort of faithful Catholic formation being offered by the Finaldi's: