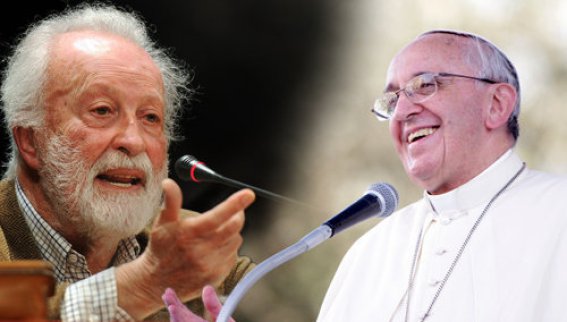 Vaticanista Antonio Socci has reported that at least one non-Italian Cardinal (apparently representing a group), has approached Pope Francis to protest in the strongest possible terms over his interview with the Italian Atheist/ Marxist nonagenarian Eugenio Scalfari. This interview was published on the morning of 29th March. In it Scalfari directly quotes Pope Francis as saying — for example, that hell does not exist, and that the souls of sinners simply disappear. As the Catholic Herald pointed out regarding these remarks:

They are all confusing. Some of them are, in the strict technical sense of the terms, heretical and scandalous.

Socci's headline runs: "An uprising of cardinals has (for now) stopped the Bergoglian heresy on hell. The farcical denial and the impeachment risk"
Blogger Vox cantoris has a summary of Socci's post here. It is interesting to note that Socci comments on fact that, while the media around the world has reported on the interview, the Italian media is strangely silent. Socci asserts that there is a "secular moral de-legitimisation" underway of Bergoglio, Scalfari and the Italian press. Clearly this has serious ramifications for the Catholic faith and the moral authority of the Church itself.

The news of the approach of Cardinals to raise the issue is at least positive in itself (if true). Please God this is the start of some proper action being taken in Rome to end this circus.

The Press Office of the Holy See responded by issuing the following statement regarding La Repubblica's piece published under its' founder’s by-line:


The Holy Father recently received the founder of the daily La Repubblica in a private meeting on the occasion of Easter, without, however, releasing any interview. Everything reported by the author in [Thursday’s] article is the fruit of his own reconstruction, in which the verbatim words pronounced by the Pope are not quoted. No direct report of speech, therefore, may be considered a faithful transcription of the words of the Holy Father.

It is hard to imagine a weaker, more flaccid repudiation of Scalfari's assertions of the pope's heresy. While it does deny Scalfari’s report is a faithful representation of Pope Francis’s exact words, it carefully avoid a direct repudiation of the general sense, meaning or purport of his remarks.

Many commentators are attacking the veracity of Scalfari's report, his dubious methods, his age, and any other straws they can clutch at. Some people are saying this is the kindly pope trying to convert Scalfari (!!). This is the fifth time Pope Francis has given Scalfari such privileged access to his thoughts. One has to wonder why? It would seem deeply counter-intuitive to continually give time to a reporter who deliberately twists and misrepresents you, but we are being asked to believe that this is what is going on here.


The universal pastor and governor of the Church is reported to have given expression to ideas that, should he be found to have expressed them, are contrary to the faith. Pope Francis must disown not only the precise verbiage Scalfari reported in his piece, but the ideas foisted upon him therein — at least the ones that are manifestly heretical. The longer he does not, the stronger the case becomes for believing he cannot.

And this sums up the situation well in my opinion. It is a simple matter for the Pope to clear up and what possible harm could be done by his firm reassertion of the truths of the Catholic faith? Some days on from this debacle, we continue to wait...