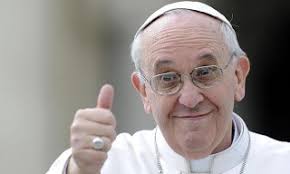 On Wednesday Damon Linker in The Week proposed that Pope Francis is "effectively promulgating two truths". He rightly asserts that Pope Francis is implicitly affirming the official doctrine while subtly undermining it with a less stringent pastoral teaching. Instead of seeking to change the underlying rules, which would risk divisiveness and even schism, he shows that it's perfectly alright for a priest or layperson to diverge from or ignore the rule in the name of welcoming as many people as possible to Christ's church.


But I think the pope's strategy for a longer game displays greater psychological acuity — and Machiavellian cunning. Francis may be betting that once the church stops preaching those doctrines that conflict most severely with modern moral norms, the number of people who uphold and revere them will decline rapidly (within a generation or two). Once that has happened, officially changing the doctrine will be much easier and much less likely to provoke a schism (or at least a major one) than it is in the present.

The article is prompting by a report last Friday that Juan Carlos Cruz, a Chilean victim of sexual abuser Fr. Fernando Karadima, told the Spanish newspaper El Pais that Pope Francis told him that it did not matter that he was gay. He said the pope told him, “God made you like that and he loves you like that and I do not care.”

These comments are obviously hugely controversial as they contradict Catholic doctrine on homosexuality. Of course, the secular media immediately jumped on the report reporting the comments as a “major shift” in Catholic teaching.

Sadly the Vatican has not confirmed or clarified the remarks Cruz attributed to Pope Francis.


This led to this from Michael Voris at Church Militant:


Pretty much the next day, news came out of Pope Francis expressing concern about homosexual seminarians. He particularly singled out individuals with “deep-seated tendencies” or who practice “homosexual acts”, yet who want to enter the seminary.

In these cases, “if you have even the slightest doubt it's better not to let them enter,” Francis said, according to Vatican Insider, because these acts or deep-seated tendencies can lead to scandals and can compromise the life of the seminary, as well as the man himself and his future priesthood.

Pope Francis' comments were made during the opening May 21 session of the 71st general assembly of the Italian bishops' conference and faithfully reflect the Church's teaching on the topic, even though Bishops of England and Wales have publicly contradicted this (see this statement from -the then Father- Bishop Marcus Stock). Also some background information on what prompted this ruling here.

In the 2016 edition of the Congregation for Clergy's ratio on priestly formation, the dicastery had written that “in relation to people with homosexual tendencies who approach seminaries, or who discover this situation in the course of formation, in coherence with her own magisterium, 'the Church, while profoundly respecting the persons in question, cannot admit to the seminary or to holy orders those who practise homosexuality, present deep-seated homosexual tendencies or support the so-called “gay culture”.'”

The ratio quoted from the Congregation for Catholic Education's 2005 instruction “Concerning the Criteria for the Discernment of Vocations with regard to Persons with Homosexual Tendencies in view of their Admission to the Seminary and to Holy Orders.”

"while [God] may love every person, he does not love the things we do that separate us from him and harm our dignity as his children,”

What is interesting is that this is precisely the kind of behaviour which is catalogued as classic "Peronism". Contradicting statements, failure to clarify, agreeing with everyone regardless of whether their positions conflict.

The second statement could be a trap a bit like the one that appeared to be set for Cardinal Burke concerning Freemasons in the Order of Malta. The idea could be to find out which bishops will actually act on this and then “deal with them”. Or it could be a move to take the sting out of his private comments to Cruz without actually addressing it directly.

Or it could all just be the mess that it appears to be. And ultimately, it seems to me that is the problem. This papacy is just so confusing, the net result can only be, as as Fr Longnecker pointed out recently:


Pope Francis is undermining his own ministry and that of the papacy.

I am a Catholic because Jesus promised us truth that would set us free. It is not always easy to following the hard truths that the Church teaches. It would be much easier not to and to just go along with everyone else. But I know it is true as Sarah Ward inspiringly told the conference in Rome last week. If we prevaricate about this truth, people will recognise that we are weak and unsure and they will see no value in Catholic thinking and living. This sort of thing only serves to undermine the Gospel message. Nothing else.