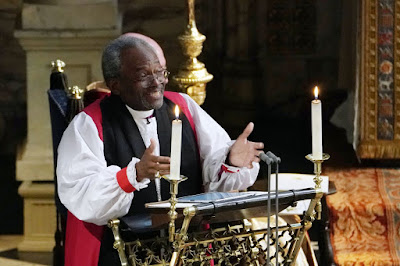 There's been loads of chat about the religious dimension to the Royal Wedding at the weekend. I have bucket loads of respect for Her Majesty the Queen and Prince Phillip who I see as stalwart servants of the United Kingdom & the Commonwealth, but I am unimpressed with the "woke" new generation of Royals, doing everything they can to be hip and relevant. Now we have political idealist Meghan, who seems to be a bandwagon for every progressive modern meme going. Have at look at Queen Elizabeth II if you want a feminist role model, and not a single one of us has any idea what she thinks about any political issue!

That said, I wish Meghan and Harry every happiness; the kind of happiness I have experienced in my own marriage. A happiness born of respect and service and sharing good times and bad times together. A happiness found in family and struggle and occupying yourself with the job of caring for others.

I thought the celebrity-filled guest-list addressed itself to the mindless. I don't care about what anyone was wearing. I don't care if George Clooney was there, or Idris Elba. They have nothing to say to me. I do see that it was good for tourism, the country and our economy, etc, etc. Some people had street parties, good on 'em. I heard someone in the shops say "it's a chance to be happy for a day" - I applaud that sentiment and embrace it. But for me the whole thing was just so knowing and strained. It was a carefully orchestrated stab at projecting a new image of monarchy that ended up as a confused pageant that was neither one thing nor the other. The new aristocrats — slebs like Clooney, Oprah and Elton — awkwardly rubbed shoulders with old aristocrats most of us would struggle to name.

The media talking point — and clearly the guiding principle of Prince Harry’s team — was ‘inclusivity’, yet it is hard to ignore the reality that the monarchy remains the least inclusive organisation imaginable. You literally have to have been the progeny of a specific person to have a place in it. The rest of us have more chance of being included in a mission to Mars than we do of becoming members of the ‘inclusive’ House of Windsor. So forgive me if the attempt to demonstrate how "inclusive" the new Royals are seemed a little uncomfortable to me. My discomfort speaks to a society at sea and unsure of itself at the moment. And how. We are so busy deconstructing the social structures and moral norms that have kept us together for centuries that we barely know what is "real" anymore, let alone what is "right".

An American Episcopalian "Archbishop" was shipped over to preach the sermon and people are raving about it. Curry spoke about Jesus, the Gospel and the Cross. he smashed it, right?

When the Church is liberated from staid sermons and formulaic motions to spontaneous expressions of joy and heart-bursting love, the world sits up and listens. God bless you, @BishopCurry, for proclaiming the love of Christ so passionately to two billion people. #RoyalWedding https://t.co/NEngmXW3gk
— Archbishop Cranmer (@His_Grace) May 19, 2018

Cranmer's analysis makes some great points. A Royal Wedding is an occasion to rejoice in the power of love, he argues. It is not an opportunity to gripe that the preacher's theology isn't quite as perfect as yours. It is all about faith, hope, and love, but the greatest of these is not expository dogmatism! 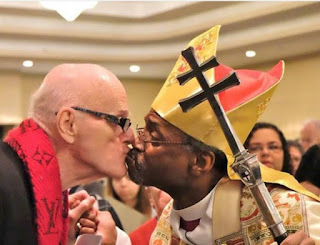 I'm not surprised by Anglican enthusiasm. I was thinking how hard it is NOT to just go along with stuff like this. It is hard to stand up and call out false preaching and false prophets. This wedding along with other Royal Weddings are the biggest showcase for Anglicanism imaginable and if your own side are attacking you it is yet further evidence of the unbreachable gulf-like divide which has opened up in this struggling ecclesial community.

The breach is clearly evident in criticism from both High Church Anglicans like Gavin Ashenden, former Chaplain to Her Majesty the Queen, and Jules Gomes, and Low Church Evangelicals like David Robertson who stated:


I listened to a man who denies the Gospel, preach a Gospel that was no gospel at all and wrote an article about it.

Gomes makes no bones about the political undertones of Curry's invitation, which he describes as Justin Welby having orchestrated:


a bloodless coup d’état against a traditionalist monarch, heterosexual marriage, conservative Anglicans, African bishops, white privilege and the disciplinary structures of the Church of England.

Curry said "If you're in love, you're in God", but John the Evangelist, who Curry is paraphrasing, is talking about agape and what Curry actually said is if you are hot for each other, God's involved. And that's just not true. Indeed it can get in the way of God's love; God's agape. It is a preacher's responsibility to know that eros and agape are different and to be able to transmit that truth. In an over-sexualised, Hollywood context, it is deeply irresponsible to suggest what Curry did led people to metanoia, led people to repentance and to Christ.

Curry then channelled John Lennon: if only we were all nicer, everything would be alright. This is Pelagianism; it states that God is nothing more than a good luck charm, because in reality all we need to do is be nicer to each other and all the world's problems would go away.

Rev Michael Curry could almost make me a believer
— Ed Miliband (@Ed_Miliband) May 19, 2018

What seems most self-evident about Curry's performance is that those who have low expectations and no supernatural expectation are hugely impressed, whereas those who are truly committed to Christ and His Church are disappointed with a warped narrative that betrays the supernatural reality of a life lived in Christ.

People are happy as long as what is said is what they want to hear, but how does that change us? How does that draw us to Christ? To change and to conform to God's plan for us? Are we called to be popular? Successful? Or faithful?

I also have deep reservations about Catholics praising the event, especially in the light of Meghan Markle's previous marriage. I have seen some Catholic clergy argue that is it valid because of the Pauline Privilege, but it is difficult to see how the Pauline privilege might apply in this case. This is very confusing for those who have remained faithful to broken marriages at great personal cost, because this is what the Church teaches.

Notwithstanding, the irrelevance of the argument, as Anglican's cannot be held to catholic standards on Marriage, nor would they want to be, but it is clear that as King Edward was forced to abdicate for his relationship with a divorcee, and Charles and Camilla were NOT allowed to marry in the Windsor Chapel because they were divorcees and now Harry and Meghan ARE allowed to marry in the same chapel. This shows how malleable Anglican propriety and morality is in regard to this essential institution, which forms the bedrock of society and the basis of community and civilisation.

Here's an Anglican perspective which I recognise as Christian and of the Gospel: