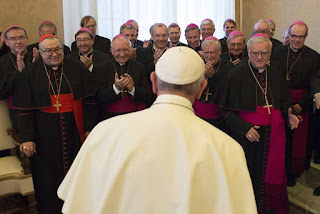 Today, Vaticanista Sandro Magister reproduces a letter from Archbishop Luis Ladaria, the prefect of the CDF, to the German bishops written and sent “with the explicit approval of the pope,” blocking the publication of the document of the German bishops that ignited the controversy and reassigns the question to a more mature reflection at the level of the “universal” Church and of ecumenical relations with other Churches, apart from the Protestants, basically, saying that this decision is bigger than one bishop's conference.

It is very interesting considering the document (which says how and when to allow communion for Protestant spouses) which was blocked by this letter was approved last February by a majority vote in the German episcopal conference, headed by Cardinal Reinhard Marx, archbishop of Munich. Catholic leaders who don't even understand Catholic stuff? How absolutely bizarre must this look to outsiders? The Church which holds the truth which will lead souls to happiness and to heaven can't even agree about what it believes about its' own internal stuff?

An appeal against this document was made to the Congregation for the Doctrine of the Faith, by seven bishops including the Cardinal of Cologne, Rainer Maria Woelki who gave this impassioned address at Cologne for Corpus Christi.

The proposal seems so wacky to me, one has to wonder at the competence of those making the proposal in the first place. It seems selfish, lacking in consideration of the wider Church, and completely out of sync with theology. How can German Catholics retain confidence in such a strange anti-catholic leadership?One also has to wonder at the reluctance of these "Catholic" leaders to consider conversion as a pastoral solution for non-Catholics. Surely for any Catholic that believes the Church was instituted by Christ to perpetuate the Sacraments for the salvation of souls it's the best pastoral solution?

This is the full text of the CDF letter, which Magister states as being two pages long in total, with the initials: “F.25.5.18.” added by Pope Francis on the first page:


Congregation for the Doctrine of the Faith
Prot. N. 212/2018 - 64727
Vatican City
Palace of the Sant’Uffizio
May 25 2018
To His Most Reverend Eminence
Cardinal Reinhard Marx
Archbishop of Munich and Freising
President of the German Episcopal Conference
Kardinal-Faulhaber Str. 7
D-80333 München
Bundesrepublik Deitschland

Your Eminence, Most Illustrious President!
At the end of our fraternal conversation on May 3, 2018 on the document "Mit Christus gehen…" [“Walking with Christ. On the path of unity. Interconfessional marriages and joint participation in the Eucharist. A pastoral guide from the German episcopal conference"] we determined together that I would inform the Holy Father about the meeting.

Already in our audience of May 11 2018 I spoke with Pope Francis about our meeting and gave him a summary of the conversation. On May 24 2018 I again discussed the question with the Holy Father. Following these meetings I would like to bring to your attention the following points, with the explicit approval of the pope.

1. The multiple ecumenical efforts of the German episcopal conference, in a particular way the intense collaboration with the council of the Evangelical Church of Germany, deserve recognition and appreciation. The joint commemoration of the Reformation in 2017 has shown that in recent years and decades a foundation has been found that allows bearing witness together to Jesus Christ, the savior of all men, and working together in an effective and decisive way in many areas of public life. This encourages us to move forward with trust on the road of an ever deeper unity.

2. Our conversation of May 3 2018 showed that the text of the guide raises a series of problems of noteworthy significance. The Holy Father has therefore reached the conclusion that the document is not ready for publication. The essential reasons for this decision can be summarized as follows:
a. The question of admission to communion for evangelical Christians in interconfessional marriages is an issue that touches on the faith of the Church and has significance for the universal Church.
b. This question has effects on ecumenical relations with other Churches and other ecclesial communities that are not to be underestimated.
c. The issue concerns the law of the Church, above all the interpretation of canon 844 CIC. Since in a few sectors of the Church there are open questions in this regard, the dicasteries of the Holy See concerned have already been instructed to produce a timely clarification of these questions at the level of the universal Church. In particular it appears opportune to leave to the diocesan bishop the judgment on the existence of “grave and urgent necessity.”

3. For the Holy Father it is of great concern that in the German episcopal conference the spirit of episcopal collegiality should remain alive. As Vatican Council II has emphasized, “the Episcopal bodies of today are in a position to render a manifold and fruitful assistance, so that this collegiate feeling may be put into practical application” (Dogmatic Constitution “Lumen Gentium” no. 23).

Bringing this to Your attention, I send You fraternal greetings and wishes of blessing.

Yours in the Lord,
Luis F. Ladaria, S.I.
Titular bishop of Thibica
Prefect