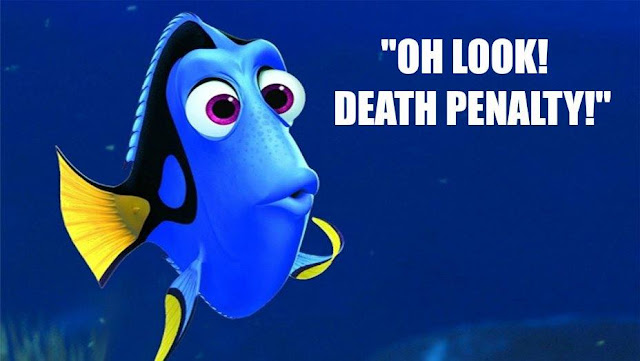 In a move that should surprise no one, Pope Francis has once again appeared to contradict two millennia of clear and consistent scriptural and Catholic teaching.

So begins the article written by Professor Edward Feser on First Things today. He continues...


There has always been disagreement among Catholics about whether capital punishment is, in practice, the morally best way to uphold justice and social order. However, the Church has always taught, clearly and consistently, that the death penalty is in principle consistent with both natural law and the Gospel. This is taught throughout scripture—from Genesis 9 to Romans 13 and many points in between—and the Church maintains that scripture cannot teach moral error. It was taught by the Fathers of the Church, including those Fathers who opposed the application of capital punishment in practice. It was taught by the Doctors of the Church, including St. Thomas Aquinas, the Church’s greatest theologian; St. Alphonsus Ligouri, her greatest moral theologian; and St. Robert Bellarmine, who, more than any other Doctor, illuminated how Christian teaching applies to modern political circumstances.

In a world where the Pope is demanding that capital punishment isn't a matter of prudential judgement having asserted that adultery is, one should really not be surprised by anything this pope says. But the timing of this announcement is quite interesting, don't you think?

Look, I don't support the death penalty, but I recognise that there has to be some recourse to it - even if the circumstances are only ever theoretical.

I also recognise that the Pope's job is to teach the faith, to hold it in continuity until the parousia, not make up new rules that contradict what was always taught before!

As John Zmirak put it


He’s like the FedEx guy. He didn’t pack the Deposit of Faith and he’s not allowed to tamper with it.

I appreciate that ‘inadmissible’ is not quite the same as ‘intrinsically evil’. But it does not mean ‘sometimes admissible’.
— Joseph Shaw (@LMSChairman) August 3, 2018

The thing is, the Pope does not have the authority to reverse the Church’s constant teaching accepting capital punishment, which culminated in the popes’ employing it for centuries, and the death penalty remaining on the books of Canon Law through 1968. The pope is the Vicar of Christ, not ANOTHER Christ. So he can’t say things like “Previous popes and Moses told you X, but I say unto you Y.”

As a friend said on FB yesterday, this raises complications regarding the practical effects of the distinction between guilty and innocent life, the ability to undermine one’s own claim to rights, how this affects our understanding of just war, self defence etc. I wish only to raise this - and I ask this question genuinely and sincerely to those who might be able to offer an answer - if the Church can err in something of such gravity, and for so long, why ought I to trust Her in anything else?

The seriousness of this cannot be overstated in my opinion. What is Pope Francis going to change next??
The brilliant Peter Kwasniewski states in his assessment:


The new teaching requires a false understanding of  'development of doctrine,' the wand that enables a magisterial magician to put a frog in the hat and pull out a rabbit. As the letter from the CDF cheerfully and blusteringly tells us: 'All of this shows that the new formulation of number 2267 of the Catechism expresses an authentic development of doctrine that is not in contradiction with the prior teachings of the Magisterium.' Voila, just like that—a rescript rabbit!

It's like Pope Francis doesn't understand the Church, Theology or Newman's idea of the development of doctrine! But isn't this simply a case of bait & switch? Zmirak again:

Make no mistake, the Vatican launched this smoke bomb this week for a reason. (It was actually decided months ago.) To get the world’s liberal activists’ attention. This sends the memo: “Don’t talk about all those molested boys. Talk about this instead!” As even Salon has noticed, it’s a bright shiny handkerchief in the magician’s hand, distracting us from all the sickening sin and corruption. From the fact that the priesthood itself is danger of seeming like a homosexual cult. (Also from the law permitting abortion about to pass in Francis’ native Argentina, about which he has been comparatively silent.)

As much as anything it is the damage being done to consistency and therefore credibility that worry me most. Is Pope Francis no more than the leader of a religious cult like the Mormons or the Jehovah's Witnesses who's "prophet" changes teachings and reveals new "revelations" at whim??

And why was this necessary now? Is this really a priority? Was the teaching so problematic?? I honestly don't think so. Honestly it makes me weep!

A very clear treatment of the issues from the Papal Posse at EWTN will make everything clear for you.