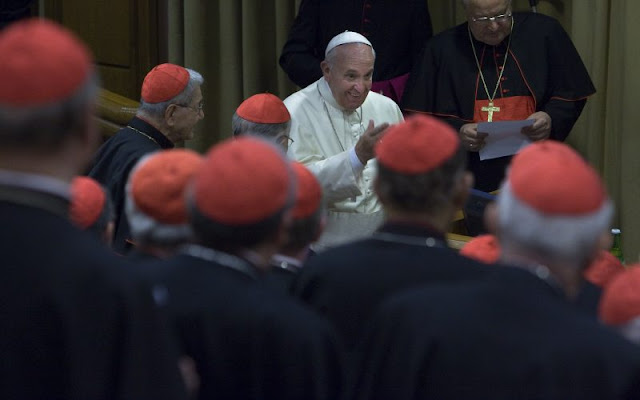 The National Catholic Register reports that on Sept 11th, Archbishop Georg Gänswein (Prefect of the Papal Household and personal secretary to Pope Emeritus Benedict XVI), spoke at the presentation in Rome of an Italian translation of the book The Benedict Option, by U.S. journalist Rod Dreher.

Archbishop Gänswein said that he regretted how only 9.8 percent of German Catholics go to Mass on Sunday, and stressed how the “so-called ‘Sunday Obligation’” is ancient and actually “the most precious distinguishing sign of Christians.”

It struck me that, given the collapse of the Church in Germany, it is rather surprising how influential German prelates are with the present Pontificate. What amazes me is that pretty much everyone recognises that this is about money. In Germany, about 70% of church revenues come from church tax (Kirchensteuer), also called worship or cult tax (Kultussteuer) when referring to non-Christian religious bodies. This is about €9.2 billion (in 2010).

The church tax is only paid by members of the respective church. People who are not members of a church tax-collecting denomination do not have to pay it. Members of a religious community under public law may formally declare their wish to leave the community to state (not religious) authorities. The obligation to pay church taxes ends once such a declaration has been made. Some communities refuse to administer marriages and burials of (former) members who had declared to leave it.

Understanding this helps one to see why the German Church is so keen not to alienate anyone on moral, or any other grounds. They don't have an awful lot of people actually going to Mass, so they don't have much hassle, not many Sacraments to administer, etc. I suppose this affords them plenty of time to meddle in the affairs of the wider Church. Notably, Cardinal Kasper has been very prominent from the very outset of Jorge Bergoglio's papacy.


Indeed Pope Francis held up Cardinal Kasper as a model theologian at his very first Angelus address on March 17, 2013, four days after his election. In February 2014, he invited Cardinal Kasper to address the College of Cardinals, wherein Cardinal Kasper argued for a change in the Church’s practice. When the cardinals emphatically rejected Cardinal Kasper’s proposal as contrary to the Catholic faith, the Holy Father himself came to the embattled cardinal’s defense, indicating that the subject would be on the agenda for two synods on the family in October 2014 and October 2015. In August 2015, Pope Francis indicated in an elliptical way that he did not hold to the clear teaching of St. John Paul II in Familiaris Consortio (1981) and Reconciliatio et Paenitencia (1984), along with Pope Benedict’s Sacramentum Caritatis (2007). He quoted the relevant texts, but deliberately omitted their conclusive teaching on the points in question.

Cardinal Reinhard Marx, who is one of the members of Pope Francis' C9 group of Cardinals. Marx has been widely criticised for modelling a kind of discipleship which seems peculiarity at odds with Pope Francis' own example. He spent around $11 million renovating the archbishop’s residence and another $13 million for a guesthouse in Rome. He is also a key advocate for admitting divorced and "remarried" Catholics to Holy Communion. When I think of Marx, I think of the fact that, in the year of 2016, only one new seminarian entered the diocesan seminary of Munich (where Marx presides as Archbishop) what more can you say except Mt 7:15-20.

If you were choosing expert advisers and looking through CV's, would these be your key choices? They are the Popes.

Over the weekend, the prominent German magazine Der Spiegel has published a 19-page report criticising Pope Francis’s leadership of the Catholic Church and accusing him of ignoring abuse survivors in Argentina. Der Spiegel is a well read progressive magazine which has been a great supporter of Pope Francis:

Oh my, this happened in the space of five years.

From “God’s Best Man” to “Thou shalt not Lie”

Is this an attack by conservatives too? 🤔 pic.twitter.com/ibjgqGzUnZ
— Catholic Deplorable (@RigidPelagian) September 22, 2018

Sources suggest that nothing like this would have come out without the permission of the German bishops who are naturally in cahoots with the German elite (let's face it, they certainly aren't standing up for the Gospel in the face of a progressive secular agenda, are they?). So why have they turned against Pope Francis if he is so in cahoots with them and their agenda? Shockingly, the answer could be that he is not  moving ahead with change fast enough for them. Whatever is really going on, it is clear that this political papacy can not succeed in its' agenda the long run. We have also seen the machinery behind the scenes to some extent and it is not pretty. Now we at least know who is on who's side. As for me and my household, we will serve the Lord. (Jos 24:15).
Cardinal Kasper Cardinal Marx Der Spiegel German Bishops Pope Francis