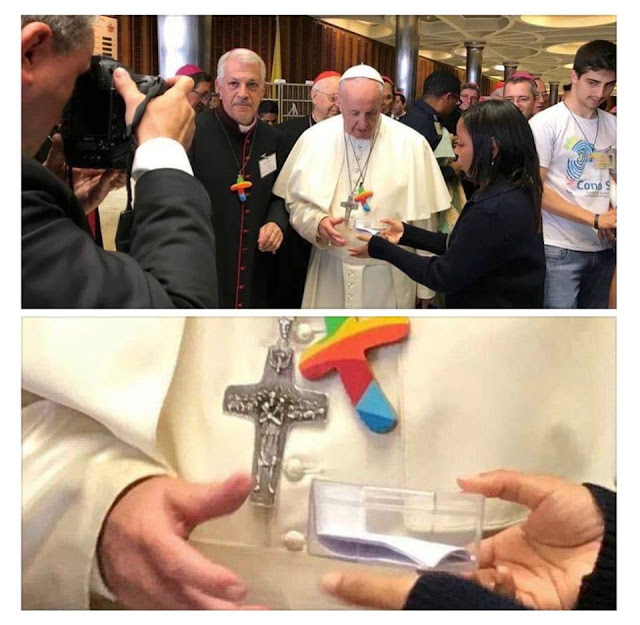 'No one in the Vatican wears a badge saying, "I am gay"'. Just because pratically every appointment I have made, just because the Synod seems to promote 'gay' issues, just because my PR men promote 'gay',
it means nothing,
No dots to join ... pic.twitter.com/81hMuR4FYH
— Monsignor Ferrari (@ServizioVatican) October 17, 2018

Part of me is saying that this is a kind of a trap, but it is worth noting anyway, I'll tell you why. I'm being told this represents something called the Cursillo Apostolate (never heard of that before). The Vatican are saying it's the cross of World Youth Day and the colours symbolise the different countries?

The thing is -- of course this will worry us given we are drowning in LGBT at the moment and every other address at the Youth Synod seems to be another attempt to push LGBT ideology into the Church. E.G. here's today's dose:

Abp Zuppi: I believe that pastoral ministry for homosexual people is an important topic. There are different sensitivities, and we must also consider different situations on the basis of geographical areas. This is a pastoral and not an ideological theme. #Synod2018Live
— Vatican News (@VaticanNews) October 18, 2018

Does it really matter what it really, actually means? What is crystal clear is how it will be read. Another friend commented:


"There’s just lots of ambiguous signs that he supports it and also lots and lots of friendly meetings towards people with that agenda, even allowing them to present at the synod on the family and then making statements against people who try to support traditional marriage."

I think this tweet from Steve Skojec makes the point really well:

I mean, is it worth writing a piece about the Vatican using the symbolism of the enemy again and again w/thin denials? The Communist Crucifix? The Stang Ferula? The Rainbow Cross? Is it already obvious that this is memetic gaslighting?
— Steve Skojec (@SteveSkojec) October 18, 2018