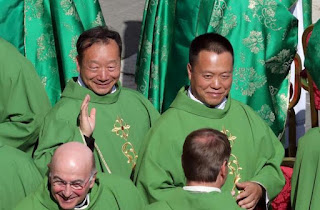 China - Hebei: Asia News reports that four underground priests have disappeared in police custody. Two of the priests belong to the ancient Diocese of Xiwanzi; the other two to that of Xuanhua.

All four priests were taken from their churches to a nearby hotel to be indoctrinated in the religious policy of the Chinese government because they refused to enrol in the Patriotic Association, which aims to create a Church independent of the Holy See.

Meanwhile, in Shangcai (Henan), the cross of the bell tower of the church and some of the building's spires have been destroyed.

Since China and the Vatican signed an agreement on the appointment of bishops, with which - at least in theory - the Pope is recognized as head of the Catholic Church - the Patriotic Association and the United Front have been waging a campaign to remind all priests that the Church in China "despite the agreement", is "independent" and as a requirement of their commitment to this it asks the underground priests not to join the Patriotic Association.

Many underground priests want to be recognized by the government, but do not want to belong to the PA, which according to Pope Benedict XVI’s Letter to Catholics, has statutes that "are irreconcilable" with Catholic doctrine:


the declared purpose of the afore-mentioned entities to implement "the principles of independence and autonomy, self-management and democratic administration of the Church" [36] is incompatible with Catholic doctrine, which from the time of the ancient Creeds professes the Church to be "one, holy, catholic and apostolic".

The Message that Pope Francis sent to Chinese Catholics, immediately after the agreement, does not deal with this burning theme among the underground faithful. AsiaNews sources state that the Vatican's position towards the PA has not changed and the Vatican delegation hopes to face the issue of the statutes of the PA in the future. Wang Meixiu, a religion expert at the Academy of Social Sciences, suggested that the PA should be an association with an optional membership.

In the meantime, however, both in Hebei and in Henan, the number of underground communities suppressed and unable to gather is growing. Many crosses and decorations of the sacred buildings are destroyed in the name of the sinicization of the submission of the Catholic faith to the Chinese culture, but above all to the PA and to the United Front, undermining every attempt at evangelization.

A great deal was made of the attendance of two Chinese bishops at the Youth Synod last month and Pope Francis' voice broke with emotion as he welcomed the two state sponsored clergymen. It later emerged that at least one of these men was a voting member of the Communist Party in China, voting against the very people he is supposed to represent as a bishop! In fact the Chinese government told the Vatican that they would be sending the two bishops who promptly left after a few days citing "prior commitments".

The Chinese deal, as was predicted, looks worse and worse.