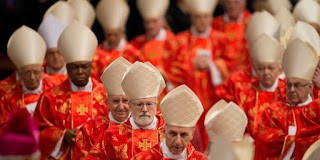 The disaffection of Catholics with Pope Francis continues to grow in the wake of the synod. Robert Royal offers a particularly sobering reflection on the Synod's final document in this article: 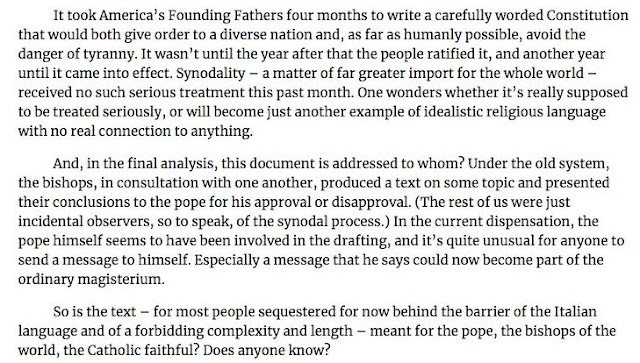 In this article he tries to answer the question “Which future for the Church?” Would the Synod Fathers accept vague language about sexuality and synodality that could lead to anything – and probably will, as the vague formulations of Vatican II did in the 1960s and 1970s – or would they affirm not only Catholic moral teachings in a world that doesn’t understand them, but also the Church’s sense of itself as, of course, engaged with the world, but as possessing a truth and a Spirit that is not of the world.

As has come to be the characteristic of Church documents under this pontiff, the final synod document is horrendously long and full of meaningless waffle, as Royal puts it, if you read through the entire text without specially looking for the worrying controversial issues which have been carefully "smuggled in" – you’d hardly notice them. And these, of course, are the main concerns for anyone truly distressed over how to help young people negotiate our troubled time. Like everything "Pope Francis" clarity, focus, simplicity are not evident in any way. You always feel that there's sleight of hand going on, that the work is about obfuscation rather than elucidation.

While the document does well in acknowledging the plight of the youth insofar as it acknowledges the rate of cultural and societal change in the modern world seems ever increasing. Unfortunately, the repeated calls for dialogue, accompaniment, listening, etc., simply fail to address the acknowledged urgency of the challenges. In the face of the challenges we face, these strategies sound terribly weak.

As Royal puts it:

Subjects like the environment, immigration, etc., which also came up repeatedly over the past month, are, by comparison and by far, of secondary importance. There’s no sense of putting first things first.

With Royal, I have to wonder how the world will look back at the Youth Synod. The Bishops mention subjects like the sexual revolution, abortion, divorce and the breakup of the family, the digital pseudo-world, the flattening of the human horizon by widespread materialist and scientistic attitudes in modern societies. But their approach to addressing these problems consists of an almost ritualistic repetition of listening, accompanying, discerning. History teaches us that this is little more than ignoring the problem. When dealing with an vicious enemy treating them as if they are merely another dialogue partner leads to further devastation and allows them to continue to be vicious unchecked.

Under previous Popes, I have always had a sense that they understood exactly where the battle was and were taking the fight to the enemy. I have always been dazzled by the intellectual quality and insight in Fides et ratio or Evangelium vitae. Who could argue about the worldwide impact of Humanae vitae or Pacem in terris? But as I have picked up each new document from Pope Francis, I have found myself increasingly wading through meaningless waffle written in terms which are a). meaningless b). incredibly boring c). only fleetingly related to the faith I have studied and practised all my life and d). desperately trying to sell me something.

Reading through the Synod's final document we are left wondering where the clear talk about discerning a religious vocation actually is in the document? What about marriage? Having children?

If you want to dabble in sociology – as the Synod organisers clearly did – social science itself has shown beyond all reasonable question that marriage, family, children constitute the documented pathways to a better life, happiness, health, prosperity, and religious commitment.

All the synod seems to have demonstrated is that the Church contains a lot of third-rate social scientists.


You have to read almost one-third of the way into the text before you come upon some real religious approaches to problems youth face – for example, the hope that the sacrament of Confirmation can become the beginning and not the end (as it more commonly is for most Catholics) of an adult commitment to the Faith.

Does this document propose solid ways to make this a reality? If it does, I can't find them. It does contain a great deal of hand-wringing and mutterings about "accompaniment" though, so that's good!