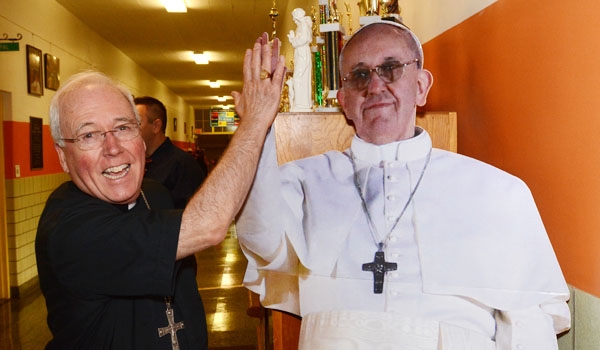 Oh this is brilliant!


"We will resume our weekly offering when the Bishop resigns or is removed," read one handwritten note that was placed in a Sunday collection basket..."

If we, the lay people, stop believing in the moral authority of the priests and bishops, if they cease to preach what the faith holds and teaches and instead start preaching some other Gospel, we have the power to stop them.

They think they are in control, we have been docile for so long, but under the strain of scandal after scandal, the dam is beginning to break, and this story could provide the template many other dioceses will be following before too long!
And the evidence that the resentment of the laity is growing rather than dissipating is all over the internet:

Dear @USCCB , you will not get another dime from me, my wife, my family, and friends, until you admit that homosexual perversion of the clerical state has produced this crisis.

No more. Enough. We will not back down and we will fight and give no quarter.

It emerges that in the deeply Catholic Rust Belt community of Buffalo, New York, some parishioners are using the Sunday collection basket to ask embattled Bishop Richard Malone to resign. Instead of giving money, some faithful are leaving handwritten messages giving the church an ultimatum.

In March, Malone released a list of 42 priests in the Buffalo diocese who had left the priesthood after facing accusations of sexually abusing minors. He has said his handling of some claims has "fallen short of the standard" but has maintained that he will not step down. "The shepherd does not desert the flock," Malone said in August.


However his former executive assistant, Siobhan O'Connor, leaked documents to CNN and other media outlets suggesting the bishop did not sanction priests accused of sexual abuse and concealed the identities of alleged predator priests.

In a meeting Malone had with priests Monday, two priests stood up and asked Malone to resign, according to a source who was in attendance, although at least a hundred supported him. The CNN report remarks that at least twelve men were afraid to speak out against Malone although they wanted to.

It's unclear how many of the 600,000 Catholics in the Buffalo diocese would like for Malone to give up his leadership. But one priest who does not want to be identified, told CNN that attendance at his parish is hurting because of Malone's refusal to step down.

"My biggest concern is that it will be the slow death of the church if he remains," he told CNN by phone. "People are leaving in droves."
"We've been wrestling some with our discomfort over supporting the diocese while Bishop Malone remains," read a handwritten note that was dropped in the Sunday collection basket and was shared with CNN.
"The bishop's response is that withholding contributions from local parishes hurts the parish who continue their ministries," wrote Spangler in an email to CNN. "Withholding contributions sadly hurts the parish community directly and immediately."
In another letter to Malone from a parishioner, obtained by CNN, the parishioner urges him to step down and explains that his or her contributions to the diocese's $100 million dollar capital campaign called Upon This Rock will be redirected. 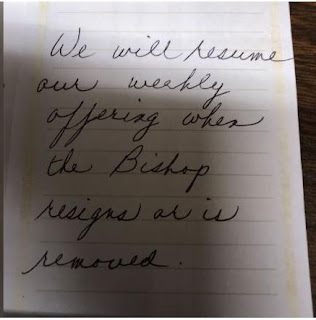 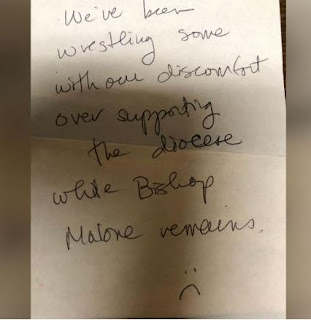