The Cardinal Archbishop of Westminster Vincent Gerard Cardinal Nichols took to Twitter recently to berate Catholics who use the internet for the “bitterness, tittle-tattle, hostility and false witness that floods the digital world.”

How easily the internet reduces us to digital tribes, engaged in a kind of bitter conflict which somehow seems acceptable because it is ‘out there’ somewhere. These things are a true disfigurement of the face of Jesus and should have no place in our lives.
— Cardinal Nichols (@CardinalNichols) October 26, 2018

Linking to a homily the Cardinal delivered at the Venerable English College in Rome on the 21st October 2018, he suggested “those who contribute” include “priests and deacons.”

“How easily the internet reduces us to digital tribes, engaged in a kind of bitter conflict which somehow seems acceptable because it is ‘out there’ somewhere. Even if we do not contribute, and sometimes we are worse than others, far too easily we amuse ourselves at the discomfort of others.”

The Cardinal said. And he has a point. But if "priests and Deacons" are among those who feel they have no alternative but to speak out, one can only, surely, conclude that our unity is under a massive attack. It is not hard to see that is clearly the case or to see why and how it is under attack.

When cardinals and bishops fail to speak up for Christ, someone has got to.


However, it is difficult not to see this as a direct comment on the discussion which has surrounded the deeply controversial Youth Synod (now being termed "the smuggler synod because of various nefarious interventions), which the Cardinal directly references at the beginning of his homily.

The Synod has promoted numerous problematic directions, as has been widely reported, and where there is controversy, there is inevitably discussion.

The same can be said of Cardinal Nichols himself, to the point where many faithful English & Welsh Catholics reading his tweets felt the need to comment on his questionable record; just look at the replies on Twitter.

I find it really difficult to understand why the Cardinal's objective failure to hold to and transmit the Gospel message he is commissioned to does not, in his mind, constitute a disfigurement of the face of Christ, whilst faithful Catholics voicing legitimate concerns does?

Back in 1980, Vincent Nichols was part of the movement which first brought the argument for Communion for the divorced and civilly remarried to light as protégé of the then Archbishop of Liverpool, Derek Worlock, who was denounced to the Holy See and accused by the then head of the CDF, Cardinal Seper, of authorizing an official document that was ‘unsound’ on birth control.[1]

Nichols was marked out earlier for greatness, spending very little time in any parish and instead being quickly appointed assistant Director, then Director at the Upholland Northern Institute (UNI), established in 1976 to bring about Worlock’s particular vision of the Second Vatican Council.

In 1981, as head of the UNI, Nichols invited Fr Charles Curran to give a series of talks there (these talks are online here). In July 1986, Fr Curran received this letter from the CDF notifying him that he was no longer to be regarded as a teacher of Catholic Theology because of his dissent from the teachings of the Church on many moral issues - especially the indissolubility of marriage.

This direction has remained consistent in Cardinal Nichols’s teaching as time has gone by.
When 461 faithful priests wrote a letter of concern about the direction of the Synod on the Family regarding communion for divorced & civilly remarried Catholics, Nichols rebuked them openly. His attitude to human sexuality has been a cause for grave concern for the pro-life, pro-family movement for many years. Serious questions have been raised about his approach to issues as diverse as abortion, contraception, the rights and status of the embryo, sex education, homosexual unions and the reception of Holy Communion for the “divorced and remarried”.

Nichols publicly supports radical activist group LGBT Catholics Westminster, which publicly rejects Catholic teaching on homosexuality. LifeSite also reported recently how the Cardinal recommended that clergy make use of the organization Quest to minister to “those who live with a same-sex attraction” This organization had been previously banned by Cardinal Hume.

Westminster Catholics also remember the 2011 betrayal of the Dioceses’ leading Catholic School Cardinal Vaughan, which prompted Michael Gormally, the Vaughan’s retired headmaster, to write a letter to Archbishop Nichols saying the diocese had treated the school “with contempt bordering on malice”.

When fellow bishop Kieran Conry of Arundle & Brighton was discovered to have had a string of affairs and resigned his position, U.K. Catholics were promised a full investigation, which never materialised. Conry shares many of the same moral positions as Cardinal Nichols.

Interestingly, Cardinal Nichols is also well known to have a rather unusual domestic relationship with Sister Carmel Wragg who began working for him as his diary secretary when he was Archbishop of Birmingham.

When Nichols moved to Westminster Sr. Wragg moved with him and now, with another nun, looks after the Cardinal’s domestic arrangements. When Nichols was made a cardinal she accompanied him to Rome and was actually photographed attempting to don the cardinal's biretta: 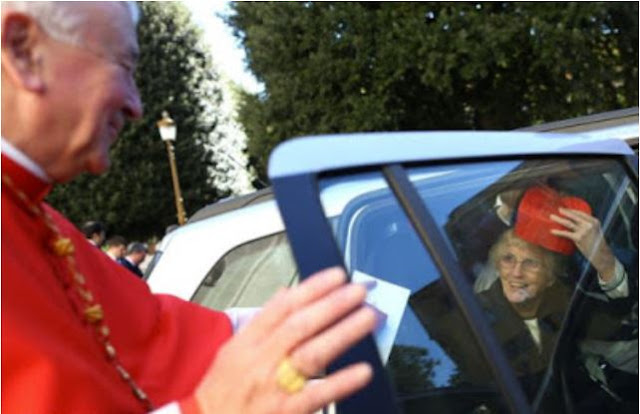 More recently readers will recall reports that Cardinal Nichols asked the Pope to intervene in an investigation into credible allegations of abuse against his predecessor, Cardinal Cormac Murphy O’Connor. Nichols and Westminster Diocese failed to follow the national investigation protocols showing deference to the Cardinal that would not have been shown to any Parish Priest.

Would it seem too obvious that the best way to avoid controversy is not to engage in any activity that would cause scandal to the faithful? Perhaps the best way to stop the faithful speculating on the internet would be to provide a holy example and clarity in teaching?

Cardinal Nichols consistent and worrying historic undermining of Catholic teaching makes him a deeply troubling, yet influential figure in Rome, especially as he was appointed a member of the Congregation for Bishops on 16 December 2013 by Pope Francis.

If the Cardinal was defending truth & the faith, speaking out against injustice and defending life (for example in the Alfie Evans case, where Cardinal Nichols weighed in against the toddler) there would be nothing faithful Catholics would prefer than to support him. Catholics long for clear leadership now more than ever. However, because concerned laity call out the problems which have become so huge, they are impossible to cover up, Nichols has chosen to go on an offensive in an authoritarian way. The trouble is he has lost the respect of so many who once would have gladly defended him.