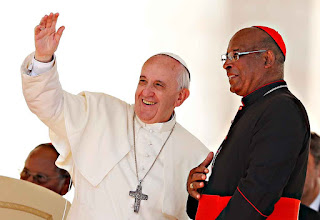 Today there's been a bit of a Twitter Storm (when isn't there if we're honest) about this Tweet from Cardinal Napier:

“The World Over” hosted by Raymond Aroyo is like a throwback to the 1960’s & 70’s, when Ian Paisley & his ilk were fulminating against the Catholic Faith in general, & Pope Francis in particular! I’ve still to hear a programme that does report negatively on or attack the Pope!
— Cardinal Napier (@CardinalNapier) December 3, 2018

It is widely rumoured that there is a bit of a campaign against Arroyo, who has been reporting goings on at the Vatican in a very clear, straight-forward way, without any gloss whatsoever.

Cardinal Napier is known for being rigorist in defending Pope Francis. He tends to take a legalistic approach and demands specific evidence. This in direct contrast to this particular Tweet attacking Arroyo, which offers no evidence and seems plainly political in its motivation. Could this be anything other than bare-faced careerism? One only needs to scroll through the Cardinal's Twitter feed to be quite shocked by he contrast between his Arroyo Tweet and this for instance:

@PierreWirawan I often wonder how you can say the above without producing any evidence whatsoever. To do so is slander or calumny.
— Cardinal Napier (@CardinalNapier) April 27, 2016

Perhaps he needs to take his own advice?

@francocartella While you have Catholic Catechism open before you, read what it says about blasphemy & calumny - Nos. 2148 & 2477!
— Cardinal Napier (@CardinalNapier) December 14, 2011

Jeramy! Aren't you being over-liberal in making serious allegations without furnishing even a semblance of proof?
— Cardinal Napier (@CardinalNapier) July 6, 2016

In fact, this uncharitable, misspelt attack on a man who, whatever else you think of him, is clearly a loyal son of the Church, is really quite shocking. How hurt Arroyo must feel to be attacked from such a position of power for telling the truth?

It also demonstrates the current culture in the Church, where even the Prince's of the Church seem happy to take to Twitter to attack & culumate anyone who is critical of the modernising agenda. This is a position which appears to be completely blind to the maelstrom engulfing the world-wide Church at the moment or the confusion that Pope Francis brings with almost every pronouncement.

The situation is extraordinary.

The Catholic Church throughout time purports to teach the Catholic faith, Catholics who care and have educated themselves about that faith: Catholics who believe it, have now become the enemy, to be publicly slandered and attacked for reporting realities created by the bishops and cardinals.

Priests, bishops and even cardinals spout heretical positions on a daily basis and no one even bats an eye. One would think the Cardinal's energy would be better spent defending the Church for these attackers? Sadly, it seems the faithful are the real problem in the Catholic Church today it appears.

The way things are is summed up in the way I feel much more confident in Raymond Arroyo's integrity than Cardinal Napier's, sadly.