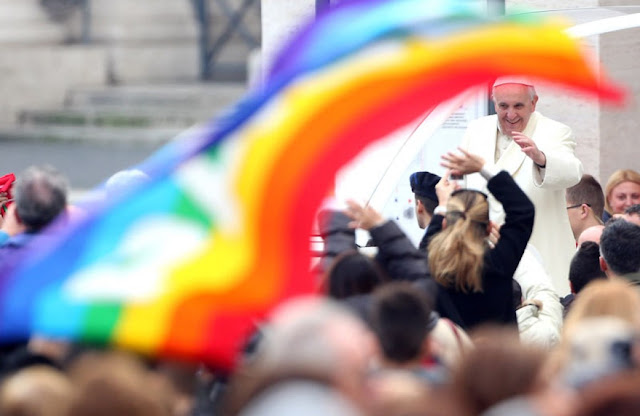 Much effort has been made to disassociate homosexuality from paedophilia to the point where this has become received opinion:

There is no connection between being a homosexual and being a paedophile. You are conflating two different things.
— LondonInternetChurch (@LInternetChurch) December 3, 2018

This predominantly secular paradigm has been adopted by the Bishops of England & Wales, who in 2010, publicly broke with the Vatican directive banning men with a deep-seated same-sex practice to be allowed into Seminary.

In 2010, Marcus Stock, now the tenth bishop of Leeds, then appointed General Secretary for the Bishop's Conference of England & Wales by Vincent Nichols (a well worn career path) stated:


"To the best of my knowledge, there is no empirical data which concludes that sexual orientation is connected to child sexual abuse.
"The consensus among researchers is that the sexual abuse of children is not a question of sexual 'orientation', whether heterosexual or homosexual, but of a disordered attraction or 'fixation'.
"Many abusers of children have never developed the capacity for mature adult relationships. Instead, their sexual attractions focus on children - boys, girls, or both.
"In the sexual abuse of children the issue is the sexual fixation of the abusers, and not their sexual orientation."

There could be something to his statement, I know many readers will find these words eminently sensible, except that, as has been demonstrated beyond doubt before and since, the vast majority of victims of abuse (over 80%) are adolescent boys, many of whom are post-pubescent.

This reality has been confirmed by a new report which argues that the evidence strongly suggests links between sexual abuse of minors and two factors: a disproportionate number of homosexual clergy and the manifestation of a “homosexual subculture” in seminaries.
The author of this report gives a stark warning:

“I found that clergy sex abuse did drop to almost nothing after 2002, but then it started to creep up,” he continued. “It’s been increasing. And there are signs that the bishops or the dioceses have gotten complacent about that.”

“It’s not at the great heights that it was in the mid-1970s, but it’s rising. And it’s headed in that direction,” he added.

Such results were “as close as you can get to a perfect correlation as I have ever seen,” Father Sullins said Nov. 2, adding that researchers usually consider correlation association above 0.3 or 0.4 to be a strong effect.

“What I say in the paper is that when homosexual men were represented in the priesthood at about the same rate as they were in the population, there was no measurable problem of child sex abuse,” Sullins said. “It was only when you had a preponderance of homosexual men.”

“When you get up to 16% of priests that are homosexual, and you’ve got eight times the proportion of homosexuals as you do in the general population, it’s as if the priesthood becomes a particularly welcoming and enabling and encouraging population for homosexual activity and behavior,” he said.

Just recently the Pope has also said that ministry or consecrated life "is not the place for people with ingrained homosexual tendencies.” This reinforces the conclusions of Father Paul Sullins whose studies indicate that the scandal of clerical sexual abuse of children and adolescents involve a disproportionate number of homosexual clergy especially where there has been a ‘homosexual subculture’ in seminaries attended by these deviant clergy.

After so much confusion coming from some of the people working in the Vatican, this shows that policies based on scientific data may still prevail over political correctness in the Vatican.
abuse crisis homosexual agenda Pope Francis