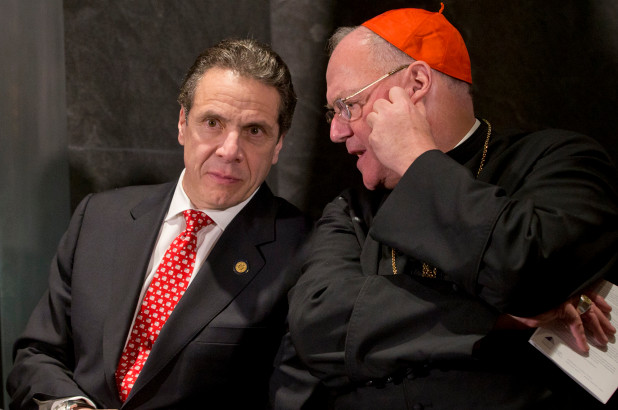 Catholics who might have been feeling uplifted after the March for Life were handed a real slap in the face when Gov. Andrew Cuomo signed the Reproductive Health Act into law last Tuesday.

Cardinal Dolan has published an Op Ed in today's New York Post following howls of protest from may Catholics who feel the Cardinal should publicly confirm that Cuomo has excommunicated himself from the Catholic Church by this act.

Obviously it is a fact that abortion is a mortal sin, it should also be understood that an abortion brings an automatic excommunication upon those who procure it, perform it, or cooperate in it. The purpose of the excommunication is not to reject anyone, but precisely to HELP people understand how evil abortion is, and help them to turn away from it. We would not respect a doctor who did not tell us the seriousness of our disease; nor should we respect a Church that does not tell us the seriousness of our sin. But again, let us bear in mind that God's mercy is ready to forgive our sin in the Sacrament of Confession, and to reconcile us to the Church by removing the excommunication.

Given these facts it is difficult for many to understand why Cardinal Dolan has not acted quickly & decisively in this instance. Here's the Cardinal's piece:

It’s been a rough time for faithful Catholics recently in our state government’s frantic rush for “progressive” ideas.

I’m thinking first of the ghoulish radical abortion-expansion law, which allows for an abortion right up to the moment of birth; drops all charges against an abortionist who allows an aborted baby, who somehow survives the scissors, scalpel, saline and dismemberment, to die before his eyes; mandates that, to make an abortion more convenient and easy, a physician need not perform it; and might even be used to suppress the conscience rights of health care professionals not to assist in the grisly procedures. All this in a state that already had the most permissive abortion laws in the country.

As if that’s not enough, instead of admitting that abortion is always a tragic choice, and that life-giving alternatives should be more vigorously promoted, the governor and his “progressive” supporters celebrated signing the bill. At the governor’s command, even the lights of the Freedom Tower sparkled with delight.

Those who once told us that abortion had to remain safe, legal and rare now have made it dangerous, imposed and frequent.

Then our governor insults and caricatures the church in what’s supposed to be an uplifting and unifying occasion, his “State of the State” address.

The bishops of this state have long supported a reform of the inadequate laws around the sexual abuse of minors. Yes, we and many others expressed reservations about one element, the retroactive elimination of the civil statute of limitations, but urged dramatic reform that, in many ways, was tougher than what was being proposed by legislators. A month ago we renewed that stance, and even dropped our objections to the “look-back” section if all victims would benefit. The governor was aware of all this.

Why, then, would he use his address to blame the church, and only the church, for blocking this bill? Why would he publicly brag in a political address about his dissent from timeless and substantive church belief? Why would he quote Pope Francis out of context as an applause line to misrepresent us bishops here as being opposed to our Holy Father? Why did he reduce the sexual abuse of minors, a broad societal and cultural curse that afflicts every family, public school, religion and government program, to a “Catholic problem?”

I’m a pastor, not a politician, but I feel obliged to ask these questions, as daily do I hear them from my people, as well as colleagues from other creeds. I’ve been attacked in the past when I asked — sadly and reluctantly — if the party that my folks proudly claimed as their own, the Democrats, had chosen to alienate faithful Catholic voters. Now you know why I asked.

As an American historian, I am very aware of our state’s past record of scorn and sneers at Catholics. It used to be called “know-nothings.” Now it’s touted as “progressivism.”

Genuine progressives work to pass a “DREAM act,” a “voters rights act,” a “prison reform act,” and we pastors of the church pitch in to support them. That’s government at its best. I pray that spirit returns.

What an extraordinary list of questions the Cardinal asks! Why does Cuomo not respect the Church? I think the answer is clear in the confusion spread by a Pope who Cuomo can quote here to support his own evil position. For someone in Cuomo's position to so misunderstand abortion that he is able to say publicly...


"I don’t think I’m against the Catholic Church. I think the bishops may have a different position than the pope, and I’m with the pope.”

...shows so clearly how wrong Pope Francis has got all this, and the dreadful damage done by the abuse crisis to Catholic credibility. This has happened on the watch of Cupich and Farrell and Tobin and Dolan.

The New York Post reports that "Dolan said he gets “wheelbarrows of letters” every day asking for Cuomo to be excommunicated — but said he didn’t want to make the governor a martyr.

“We have a governor that uses his dissent from church teachings as applause lines,” Dolan fumed.

“He likes being the … bad boy when it comes to the Catholic Church.”

Asked if the governor should be denied Holy Communion for promoting the expansion of abortion, he said: “That’s kind of a pastoral issue that I think one has to talk to him about and I think proper people have, and I’d be uncomfortable going into that.”

The trouble is, excommunication is something Cuomo has done to himself whether Dolan likes to acknowledge it or not. The Catholic Church has a pastoral duty to advise him of his grave spiritual position. But moreover, the Church needs to show others that it means business and that these things do actually matter!

Canon Lawyer Ed Condon spells it out in this piece for First Things:


Gov. Cuomo’s consistent and vocal support for this particular legislation, his unique role in enacting it, and his flouting of the clear and public admonitions of two bishops who can claim jurisdiction over him make his case unique.
By the straightforward application of the canon on credenda teaching, Cuomo can be said to have committed an external and imputable delict of heresy, and to have incurred an excommunication which can, for the public good of souls, be declared by his bishop, be it Dolan or Scharfenberger.

Not only can Cuomo be excommunicated, he should be. Canon law traditionally drew a distinction between two kinds of excommunicated person: the tolerati and the vitandi. The tolerati, those to be tolerated, were people who had broken communion with the Church and could not, for example, receive the sacraments, but were still allowed in church and kept within the community as their situation was resolved.
On the other hand, there were the vitandi, those to be shunned, expelled from the Catholic community and barred from even attending Mass until they had atoned for their conduct. They were to be shunned not only for their own good, in the hopes that it would recall them to the faith, but because their public identification as Catholics would be a scandal and a dangerous example to others.

Unlike his father, who offered at least a fig leaf of being “personally opposed” to abortion while acting to bring it into law, Cuomo the son has given no indication of any personal reservations about making New York the most abortion-friendly state in the nation. At the same time, he has frequently invoked his Catholicism to support his other legislative priorities; insisting, when it suits him, on the importance of his faith and that he “stands with Pope Francis” (who called abortion Nazism with “white gloves”). In doing so he co-opts and misrepresents the moral authority of the Church and the Holy Father, wearing his inconsistent-ethic-of-life as a badge of legitimate Catholic identity.

Governor Cuomo’s excommunication should be declared for the good of souls: first of all for his own, but also for the good of those who will otherwise follow him into his grave and public error.