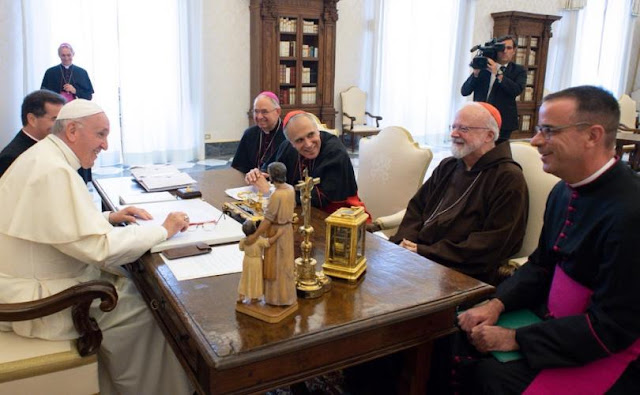 Opus Dei announced on Monday that it had paid a settlement following accusations of misconduct against a priest of the society made in 2002.

Fr. C. John McCloskey was the subject of a complaint by a married woman to whom he had been giving spiritual counsel. As a result of the complaint, Opus Dei paid a reported settlement of $977,000 to the woman in 2005.

Honestly, I have lost patience.

I'm a Catholic because I believe in Jesus Christ and because I believe that His teaching is the way the world should be: focused on the dignity of each and every human individual, attuned to justice and truth, quick to forgive shortcomings and failures, but constantly focused on building a community which adheres to the standards and ideals taught by Jesus Christ. THIS IS NOT IT! If we fail to represent Christ in our societies and our communities and our Churches, we are not salt and light. We are not preaching the Gospel, we are not evangelising anyone: who are we kidding?

Is there anywhere in the Church this poison has not pervaded yet?

This is made much, much worse by the news on Friday that Argentine bishop Gustavo Zanchetta, who resigned suddenly in 2017 stating poor health and then landed a top administrative job at the Holy See, is under preliminary investigation after three priests of the diocese of Orán had accused him (their own bishop) of the sexual abuse of a dozen seminarians and other misconduct.

The case of Zanchetta may prove more difficult for Pope Francis to shake off than his defence of Chilean bishops whom he finally had to acknowledge as being guilty, or the cover and honors he gave to Cardinal Theodore McCarrick, despite knowing about his ongoing homosexual activity.
As Sandro Magister explains:

In both cases Francis absolved himself either by blaming those who had advised him badly or by refusing to respond to those who - like former nuncio in the United States Carlo Maria Viganò - personally called him to account. And also at the summit at the end of February he was getting ready to reproduce this typically populist dynamic, with himself in the guise of purifier of a clerical caste soiled by power.

The problem with the Zanchetta case is that he was an associate of Francis before he was elected Pope in 2013. Zanchetta was executive undersecretary of the Argentine episcopal conference which was headed by none other than Jorge Bergoglio (Pope Francis) himself. Zanchetta was so well appreciated by Bergoglio that he was one of the very first Argentines whom the new pope promoted to bishop, on his own initiative, bypassing all canonical procedure, on July 23, 2013, at the head of the diocese of Orán, in the north of the country.

Magister continues:
But Zanchetta didn’t last long as bishop of Orán. Because of “very strained relations with the priests of the diocese,” which earned him “accusations of authoritarianism” and made manifest his “inability to govern,” the Holy See now recognizes, according to the statements from Gisotti.

The fact is that on July 29, 2017, Zanchetta suddenly disappeared. Without any farewell Mass and without any goodbye to his priests and faithful. He only made it known, from an unspecified location, that he had health problems that needed urgent care elsewhere and that he had just returned to Rome, where he had placed his mandate back in the hands of Pope Francis. Who very promptly, on August 1, accepted his resignation.

Zanchetta was for a brief time the guest of the bishop of the diocese of Corrientes, 500 miles to the south, Andrés Stanovnik, the same one who had ordained him. Only to reappear in Spain, in Madrid, apparently in good health.

Curiously, the capital of Spain is the destination to which Francis had directed two years before, in 2015, the Chilean bishop Juan de la Cruz Barros Madrid - before promoting him as bishop of Osorno against the opinion of the higher-ups of the Chilean Church and of the nunciature - for a month of spiritual exercises preached by the famous Spanish Jesuit Germán Arana, one of the pope’s most influential advisors in many episcopal appointments, and in this case a tenacious defender of the innocence of Baros, who had already been hit with very weighty accusations of sexual abuse.

The fact is that Zanchetta’s trip to Madrid was also the prelude to his promotion by Bergoglio, who on December 19, 2017 called him to the Vatican to do nothing less than manage the Administration of the Patrimony of the Apostolic See, APSA, in the new and tailor-made role of “assessor.”

It feels to me as if this news comes in the midst of a world-wide systematic collapse of leadership in the Church which has been held at bay post Vatican II by Pope St. John Paul II & Pope Benedict XVI, but to which the papacy of Jorge Bergoglio has been a catalyst, opening the door for all the poison; the anti-Catholic, modernist, revisionist rhetoric to come pouring out. 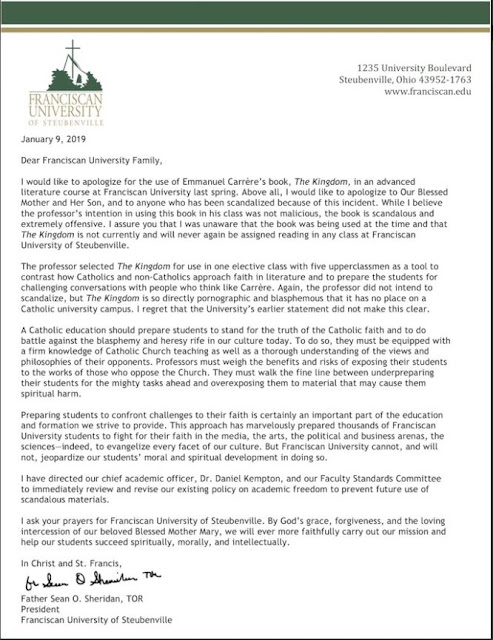 As if all this wasn't enough, this morning the excellent, precise, diligent Edward Pentin reveals that in contrast to his insistence to the contrary, an allegation of misconduct against Archbishop Theodore McCarrick was reported to Cardinal Donald Wuerl in 2004. Wuerl has repeatedly stated that he knew nothing about the disgraced ex-cardinal’s alleged sexual misconduct until 2018.

Remember, Francis has asked Wuerl to remain in the archdiocese as apostolic administrator until his successor is named, and also released a letter in which he praised Wuerl’s actions in seeking the good of his archdiocese over his own personal interests.

In response to Wuerl’s request for Francis to accept his resignation, the pope wrote: “I am aware that this request rests on two pillars that have marked and continue to mark your ministry: To seek in all things the greater glory of God and to procure the good of the people entrusted to your care.”

“You have sufficient elements to ‘justify’ your actions and distinguish between what it means to cover up crimes or not to deal with problems, and to commit some mistakes. However, your nobility has led you not to choose this way of defense. Of this, I am proud and thank you,” he continued.

We consistently see misrule, bad blood, and sexual impropriety. The Pope acting like some kind of South American dictator running rough-shod over Church teaching and procedure.

This revelation makes Rome’s speedy appointment of Wuerl as DC apostolic administrator, in apparent disregard of c. 421 which assigns responsibility for that choice to a body of local priests, all the more inexplicable, and now embarrassing, for the Holy See.
— Edward Peters (@canonlaw) January 11, 2019

Obviously this also means Archbishop Viganò's testimony in respect of Cardinal Wuerl despite the Vatican's desperate attempts to discredit him over the last few months -- it's just disgraceful!

Important to note that Vigano months ago in his second letter claimed that “Cardinal Wuerl lies shamelessly.”

Tonight’s breaking news is yet another example of Vigano’s testimony being confirmed by a third-party source. https://t.co/dkPT0HwlOK
— Thomas Peters (@AmericanPapist) January 11, 2019


If being Catholic means anything, if it works, we should model something attractive, not something repugnant. However time and time again recently we see those in exalted positions found guilty of the most heinous crimes and using their positions to then cover up those crimes. When I see institutions like Steubenville promoting such dreadful, dark ideas on young Catholic minds, I feel like losing hope.

Whilst I always remember the words of the Venerable Archbishop Fulton Sheen, that we should "Judge the Catholic Church not by those who barely live by its spirit, but by the example of those who live closest to it." When those "barely" or "not even" living by "its spirit" are bishops, cardinals and even the pope, times could not be darker.

A friend posted this a couple of days ago:

"It is an old and tired story that must be reported over and over again: The Catholic Church is a global criminal organization that protects and enables rapists and pedophiles."

For the first time in my life, I felt more inclined to agree with that statement than attempt to defend the present leaders of Christ's poor, beleaguered Church. Lord have mercy!!

‘I am convinced that the Church of Peter must affirm her past, or else she will dig her own grave.’ -Pope Pius XII pic.twitter.com/cN0lQuJZMV
— Nicholα I Reginα (@Sacraestvita) October 18, 2018