The Daily Mail has an article which shows how what Pell is accused of is pure impossible fiction: 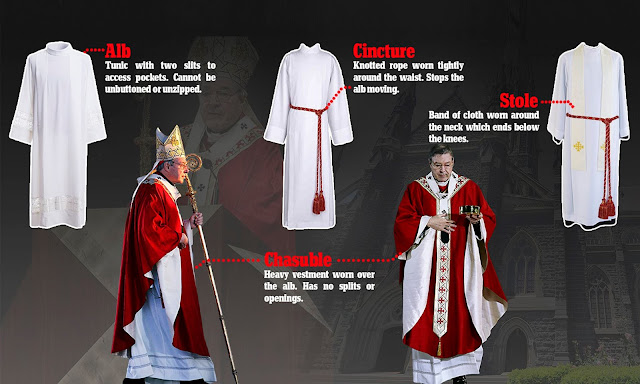 Meanwhile, the likelihood of the success of Pell's appeal looks increasingly likely and appears to be expected by many who understand the Australian legal system:

Should say that, from the rest of their conversation they weren’t enamoured of the Catholic Church in general and Pell in particular.
— Stephen Morgan (@Trisagion) March 1, 2019

I thought this comment shed important light on the case: 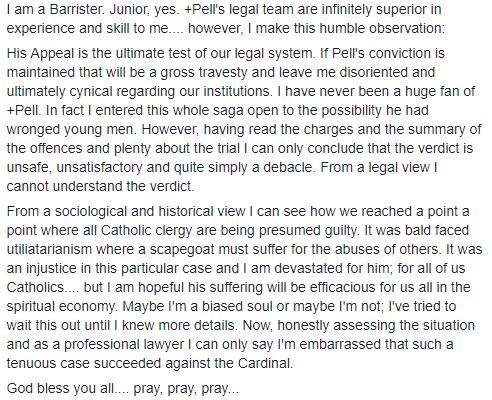 "Juries don't need much persuasion that Catholic priests are no good" 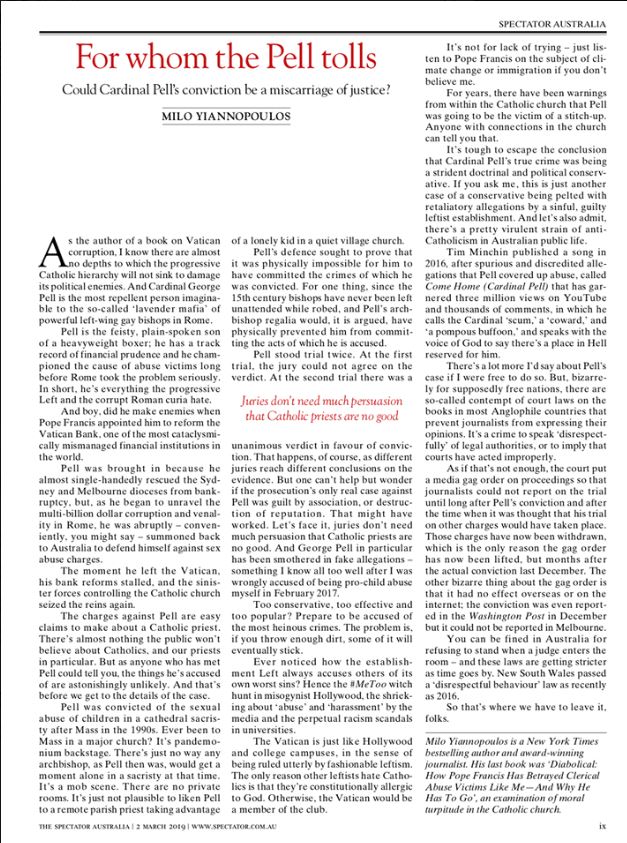 "...no amount of evidence made any difference at all. Every single witness, 24-odd of them, either contradicted, or completely failed to support the complainant's series of stories [re the supposed place and times of the supposed crimes], which were repeatedly changed as facts emerged to successively destroy them. The prosecution was reduced to saying that the witnesses couldn't prove that the crimes were impossible [which is an absurd tactic, but is what the prosecution actually did because it had not a single fact or evidence in its favour. And the treatment of the complainant is conducted as if the 30 YO is a vulnerable and possibly fagile and intimidated minor, so there is no opportunity to test the character of historical veracity of the complainant. And the complainant did not front court, but only anonymously "appeared" by video link, with the public even excluded from hearing his serial "testimonies". In this environment, no amount of photographs would change the tactics of the prosecution, nor the emotional susceptibilities of the jury."

This is backed up by this with a source:

Pell's Barrister cause a great deal of concern among some Pell supporters at the bail hearing with these awful comments for which he has now apologised.

In fact the way these comments were reported are a misinterpretation which take them out of context see the Catholic Herald's explanation here. Part of the confusion appears to have arisen because you can't comment on guilt in a sentencing submission; you can only attempt to convince the judge of where the offence as proven sits on the scale. Therefore these comments were not any sort of admission.

What this trial demonstrates is what we will see everywhere soon enough - persecution of Christians for their beliefs. This populist movement has been given great impetus by the abuse scandals which are rolling through the media endlessly at the moment.

The Catholic Church has totally abdicated her moral authority, the vast majority of priests, bishops and cardinals have become custodians of a religion which is frightened of its' own teachings and no longer prepared to defend them. This is amply demonstrated in this recent survey, which shows 89% of Catholics who attend the ordinary form of the Mass think the Church is wrong about contraception, 51% approve of abortion, 22% attend Mass every week. We have lost the battle even inside our own institution! Those outside of the Church see us as even more ridiculous, and now, ultimately, some sort of international crime ring!

I said on Sunday, "I do not want to belong an an international crime ring, which is what many see the Church as. but there is no-where else to go if we love Jesus Christ". https://t.co/jHFSbEJ7Oo
— fr. raymond blake (@raylblake) March 1, 2019

If we do not do it, we will be swallowed up and end up as recusants. A faithful remnant meeting in secret as it was just a few hundred years ago in this country.

Cardinal George Pell is a man prepared to have the arguments. Please pray for him now.