Francis doesn't want to be Pope

As Edward Pentin remarked, This is something he has done quite regularly during his pontificate though not quite so insistently as today.

If it tells us anything, it is indicative of a false humility which shows he thinks the homage paid to the Petrine office is being paid to him personally. He may not want to be Pope, but he is the pope and the way Catholics treat the pope is different to the way we treat priests or bishops.

The pope here gives a masterclass in how to humiliate people. If he felt so strongly about this, why not inform those he was greeting respectfully, or just keep his right hand by his side and save embarrassing these poor people?

Surely it would show more humility to just let the people show reverence for his office if he didn't like it? It is the yoke he has been given. Three years ago, Pope Francis described “rigid people” in the Church as “sick” and suggested they were likely to be leading double lives. On other occasions, he has described such people as heretics rather than Catholics, people with “weak hearts,” whom he would like to trip up with banana peels so that they would see they are sinners.


This footage is going viral. I think it is disgraceful; an insult to the faithful and an affront to the Petrine office. I have no doubt much will be said of it. Of course, Pope Francis doesn't have a problem with everyone kissing his hand: 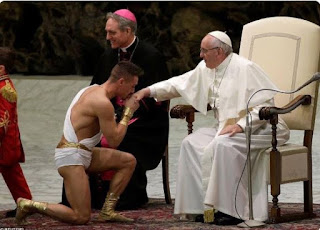