Head of Ignatius Press: Pope Must respond to Heresy Charges 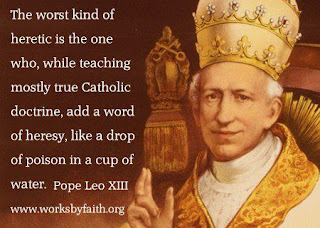 Fr. Joseph Fessio, SJ, the founder and editor of Ignatius Press is a rare thing these days: someone who doesn't pass rash judgement and gives a fair commentary, in this instance on the subject of the Open Letter to bishops accusing Pope Francis of heresy. Fr Fessio says in this interview that these statements are carefully made and require a response from the Pope or on his behalf.

Many of those criticising the authors of the letter seem concerned with the undoubted damage that such accusations do to the office of the Pope. But it seems clear to me that the damage is being done by the Pope, and the Pope has not offered any clarifications of any questions asked of him up to now. As Fr. Fessio so correctly asserts in this interview:


"Certainly no one in his right mind can deny there is ambiguity nor that people are using what the Pope has said to forward positions which are false or heretical or contradictory so there is confusion, anyone who says there is no confusion is confused."

This is the essential point for me. Anyone who says there's no problem is lying - end of story!

You can support my blog by visiting my website Scion Supply Ltd, recommending us to a friend or making a purchase. Thank you!
Father Joseph Fessio Heresy Ignatius Press Open Letter to Bishops Pope Francis Raymond Arroyo The World Over Live