How to recognise an agenda... 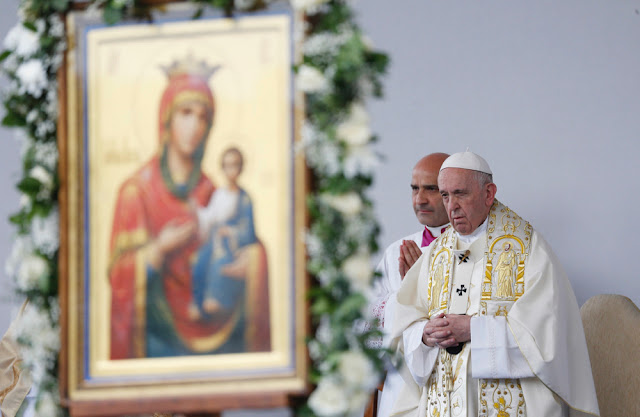 Recently I saw this story doing the rounds where Pope Francis caused a man who identified as homosexual to cry when he told him that a person has “dignity” no matter if the person has homosexual tendencies “like this or has an attitude like this.”

The man later told reporters that he understood the Pope’s words as an affirmation of his homosexuality and a message against those “who hold extreme religious views of anti-homosexuality.”

Actually what Pope Francis said is hard to criticise, we should always approach the subject (in my opinion) from the fundamental teaching that all human beings are created in the image and likeness of God and therefore have equal dignity.

But is this what the Pope is really about?

In the same week, we have seen Cardinal "nighty-night baby" Tobin state that Church teaching on homosexuality is "unfortunate"!! It is beyond me frankly to understand how one can be a Cardinal in the Catholic Church and consider its' main teaching document "unfortunate" - doesn't anyone else see a problem here?

With some serious grounding in Catholic theology behind me, the structural integrity and logic of the Catholic faith has bolstered and given me confidence in the supernatural dimension of Catholic teaching; revealed by God, made manifest in Christ. Christ has given the Apostles the teaching authority to explain the faith He deposited with us; the Church holds to that Apostolic faith in perpetuity. When we struggle with some point of teaching, we do not simply overturn what has always been believed. Rather we wrestle with it, in context and in prayer to understand what God wants us to know about this issue. To overturn the settled teaching of the Church is obviously inauthentic, supplanting our own agenda for God's. Tobin's agenda is manifest and it is an agenda which does not have confidence in God's revelation and does not value the teaching of the Church.

Now layer that with the recent nonsense in Malta where Archbishop Scicluna is obviously the Pope's blunt instrument, lacking the necessary wit and intelligence to act surreptitiously, Scicluna takes no care with Church teaching. He makes no effort to temper the agenda in the way so many others do and he doesn't bother with the Pope's model of hinting and never clarifying, he just comes right out with it. Or is he as stupid as this tactic would seem? We all know that he is learned, and yet all his learning appears as nothing to him when it is in competition with his ambition. If this is the case, it makes Scicluna all the more dangerous.

Given Scicluna & Tobin's track records as Pope Francis' useful idiots (and I use the word because it seems oxy-moronic to advocate a position in contradiction to the one the organisation you represent has consistently held) when it comes to betraying Christ and His Church, can we say that there is a clear agenda at work here? I think so. These ambitious charlatans can't hold themselves back in their eagerness to sell Christ down the river if it gets them a promotion!

The former Prefect for the Congregation for the Doctrine of the Faith can see it too, and what's more he is no longer frightened to spell it out for us.

In comments addressing critics of Benedict XVI’s recent essay on the scandal of sex abuse in the Church, Cardinal Gerhard Müller emphasised that Church renewal must be centred on Christ and his teaching last Friday.

“Rebuilding and renewing the whole Church can only succeed in Christ—if we get our bearings by the Church’s teaching on faith and morals,” the prefect emeritus of the Congregation for the Doctrine of the Faith wrote in an essay published April 26 at First Things.

He explained that some are trying to 'substitute the Church’s moral teaching... with a self-made sexual morality according to the egotistical pleasure principle from the 1970s.'

I found Müller's words of great import here. He appears to me to clearly understand what we are up against, and, in response, he aligns himself with Christ and the Church. He suggests that the height of the scandal we are facing comes “when the blame is not laid upon those breaking God’s commandments, but instead the commandments themselves are made responsible for their transgression: The cause of sin becomes God, who is allegedly overtaxing us.” Isn't this exactly what we see Scicluna and Tobin doing? Isn't this what Pope Francis does daily, attacking Christians who are too "rigid" or, as he stated yesterday in Bulgaria "God is love, but too many Christians live their faith in a way that undermines any attempt to communicate that essential fact to others". Pope Francis seems against converting others to the Gospel, and intent on condemning those who do believe in it!

Given these most recent comments of the Pope, Cardinal Müller almost appears to be directly addressing just this tendency of the Holy Father when he says that “the Church is accused of interpreting God’s commandments in an outdated fashion. Therefore, it is said, we now need to invent (or, as the euphemistic language puts it, ‘develop further,’ meaning ‘falsify’) a new sexual morality that agrees with the findings of modern human sciences, which morality ‘philanthropically’ leaves untouched the factual reality of people’s lives.”

But these proposals forget that “empirical science without any presuppositions does not exist, and that the underlying anthropology always influences how research data are interpreted.”

“Morality is about distinguishing good and evil,” he stated. “Can adultery be good only because a de-Christianized society thinks about it differently than the Sixth Commandment puts it?”

St. Paul’s writings against sodomy must be taken at face value, Müller emphasised: “How do exegetes know that behind the obvious meaning of these words, something else, even the total opposite, is intended? In immoral acts, especially against matrimonial love and its fecundity, Paul detects a denial of God, because the will of the creator is not recognised as the measure of our doing good.”

The consequence for the Church’s life is that “we can only admit to ordination candidates who also possess the natural prerequisites, are intellectually and morally capable, and show the spiritual readiness to give themselves totally to the service of the Lord.”

“We can only turn away from false ways if we understand male and female sexuality as God’s gift, which does not serve narcissistic pleasure but has its true goal in the love between spouses and the responsibility for a family. Only in the wider context of Eros and Agape does sexuality have the power to build up the human person, the Church, and the state. Otherwise it brings about destruction.”
Isn't this what we are seeing Pope Francis and his cronies do now? Destroy the Church by refusing to speak the truth in love?

"The Pope is not an absolute monarch whose thoughts and desires are law. On the contrary: the Pope's ministry is a guarantee of obedience to Christ and to his Word. He must not proclaim his own ideas, but rather constantly bind himself and the Church to obedience to God's Word, in the face of every attempt to adapt it or water it down, and every form of opportunism." - Pope Benedict XVI, 7 May 2005.

Do you like gardening? Check out our range of gardening equipment and support us with a purchase!
Archbishop Charles Scicluna Bulgaria Cardinal Gerhard Müller Cardinal Joseph Tobin homosexual agenda Pope Francis