On Saturday I took part in Life Fest 2019 at Church House & the Emmanuel Centre in Westminster from 9.30am. The event culminated in the March for Life which started outside Church House at 14.30 and marched to Parliament Square.

It is hard to put into words what a positive, happy, worthwhile day this is each year. I can't help think that, in the UK, it must be the largest Catholic public act of witness each year, with numbers estimated at over 5,000.

For me it feels like everyone is there. You spend the day catching up with friends and excitedly hugging people you haven't seen for a year or so. There is always someone new to say hello to, this year I got to meet Laurence England for the first time face-to-face:

This is me with Mark Lambert, Catholic blogger, as you can see from my face I am not very good at taking selfies. pic.twitter.com/wvxZRA4qyd
— Laurence England (@TheCrushedBones) May 11, 2019

Everyone wanted to see the film Babies which was played in the main auditorium.

Numbers swelled as we began to march and there was singing, chanting and praying. There was such a wonderfully diverse spectrum of people all coming together with a single purpose: to stand against the injustice of abortion and there was a truly joyful atmosphere throughout the column of marchers as we made our way to the very place the abortion bill was passed. 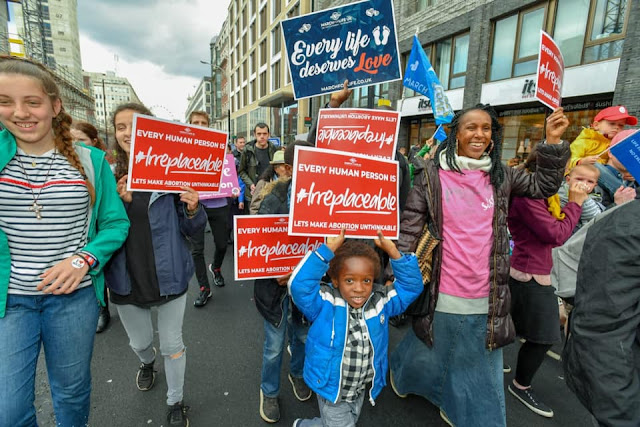 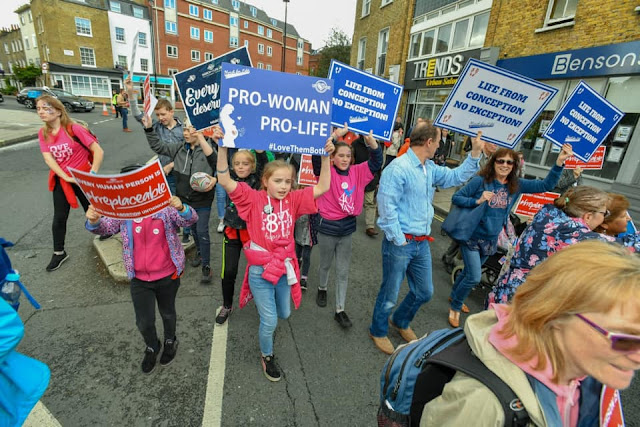 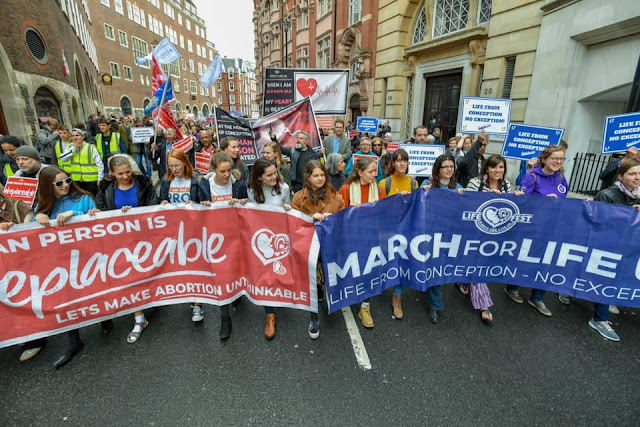 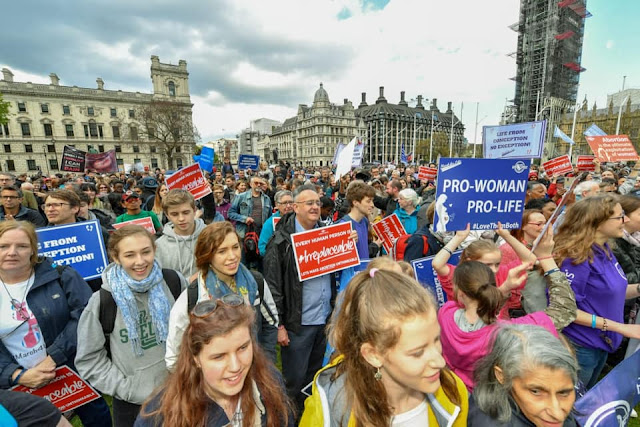 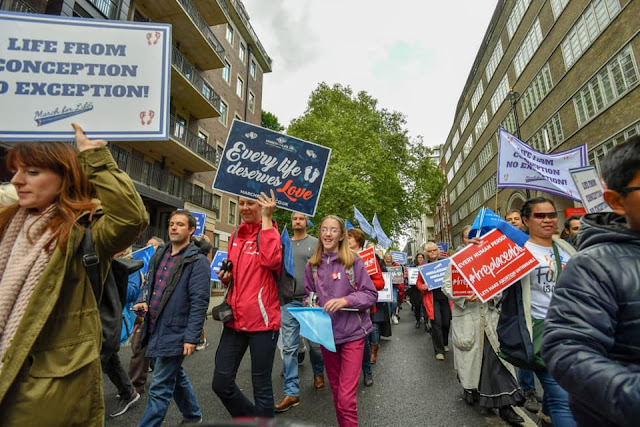 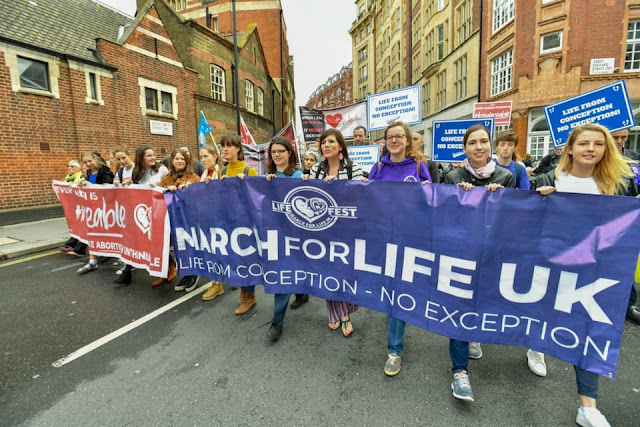 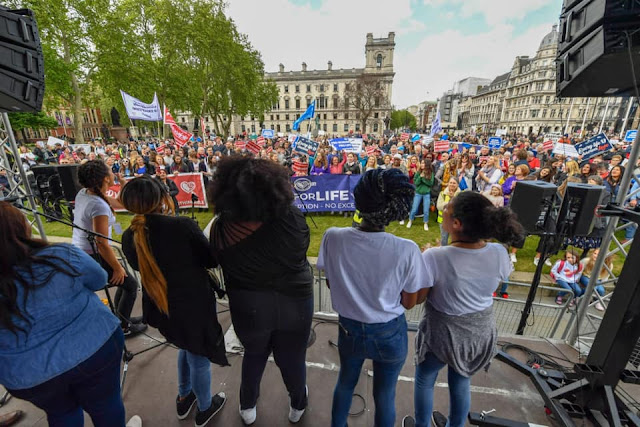 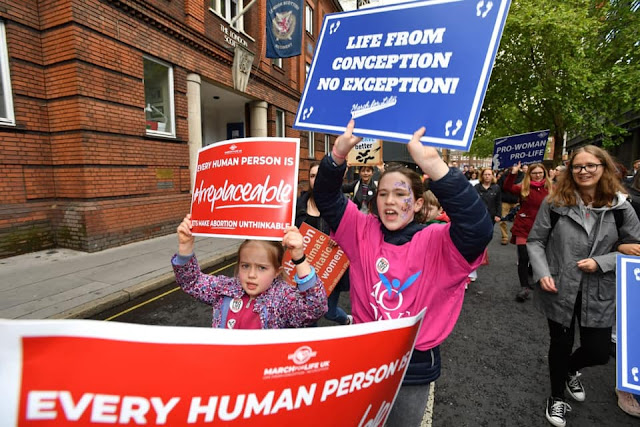 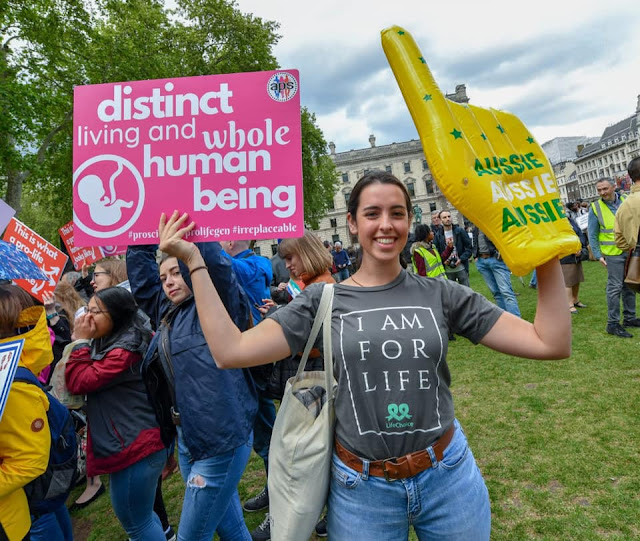 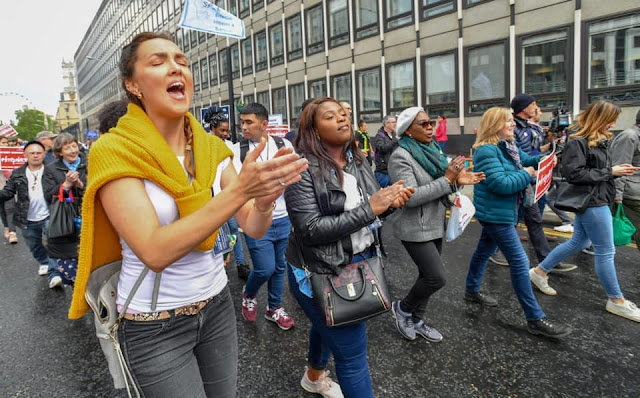 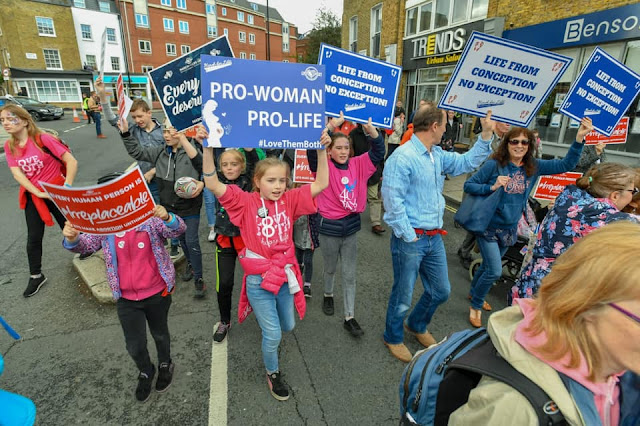 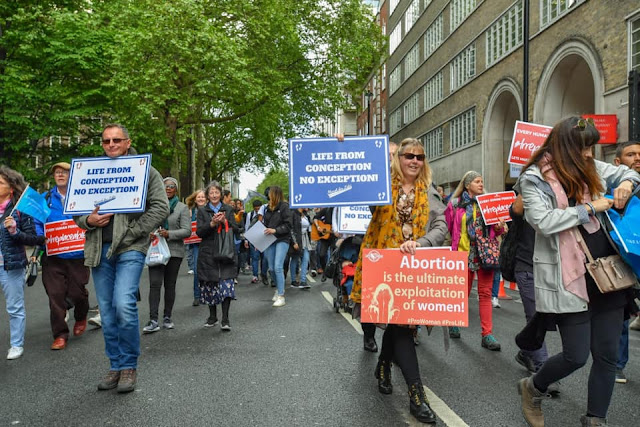 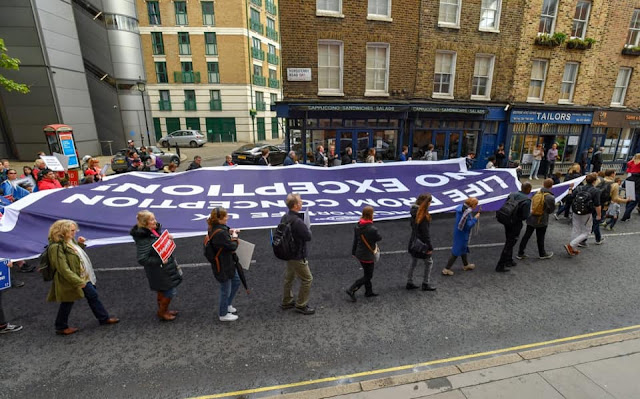 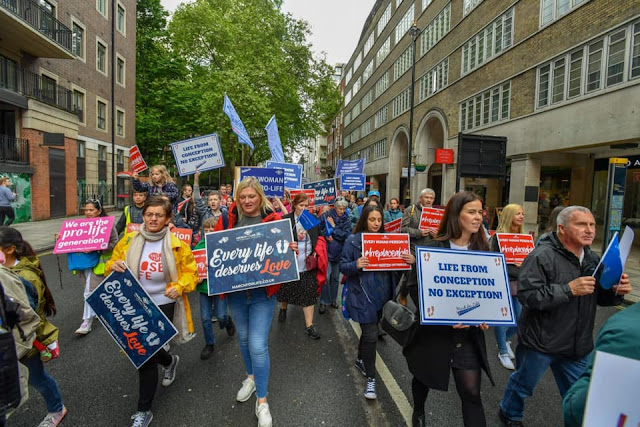 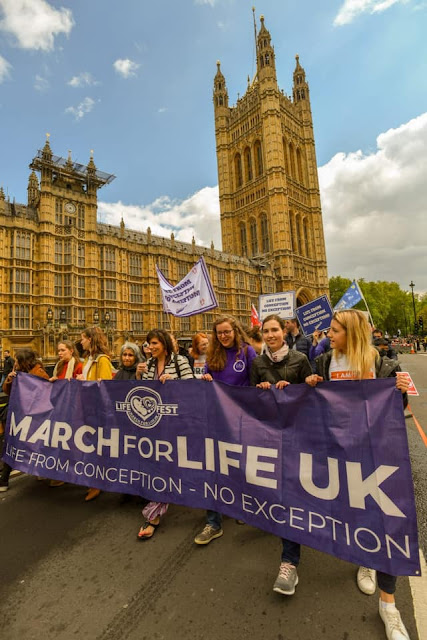 When we got to Parliament square we had an inspirational address from Obianuju Ekeocha:


and an incredibly powerful testimony from abortion survivor Melissa Ohden from the United States who told her story of surviving a "failed" saline infusion abortion 41 years ago.

"My medical records indicate that I soaked in that toxic solution for five days — two days longer than what was typical for the procedure," she told the shocked audience. "No mercy was shown to me over those five days. There was no mistake made that spared my life.
On that fifth day of the saline infusion abortion, my birth mother's labor was finally induced," she continued. "I should have been delivered dead, as a successful abortion, a deceased child. But quite clearly, God had other plans that day for me." 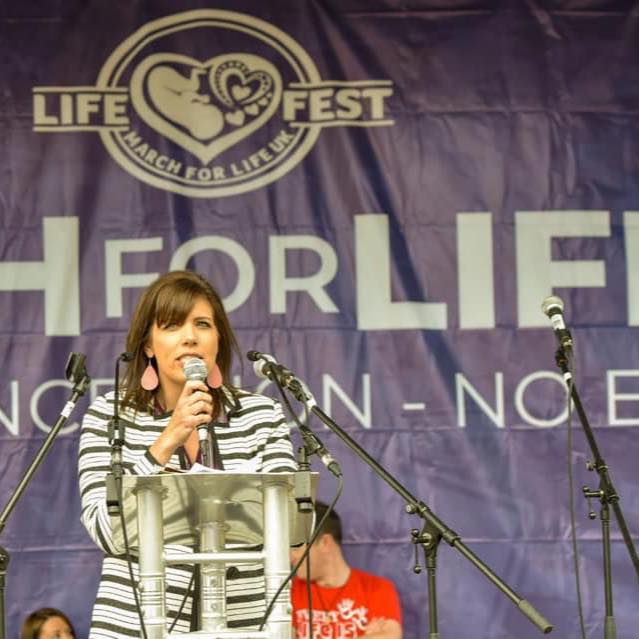 Bishop John Wilson, Auxiliary of Westminster, was once again present as the representative for the Bishops of England and Wales, but I really do think Bishop John Keenan of Paisley is a hero and I did get to chat to him and offer my gratitude for his courage and encouragement by being present at the March.

Here is @john_bishopjohn making an act of reparation for the 1967 #Abortion Act, outside of the Parliment where it was passed. Nine million babies have lost their lives to that Act, 9,000,000! @March4LifeUK #Irreplaceable #MarchForLife pic.twitter.com/pPusZaYOr3
— Good Counsel Network (@GoodCounselNet) May 13, 2019

There was also a good number of clergy on the march, a number of Anglican clergy, Fr Armand de Mallory from the FSSP lead a group of about twenty who had travelled from Warrington, and several dozens from the other FSSP apostolates in Reading, Bedford, Chesham Bois and London (Juventutem Group). 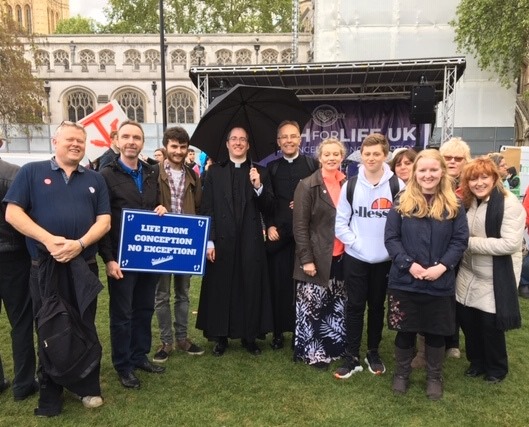 There were a good number of Franciscans who were leading prayers as the march progressed and it was particularly heartening to see a strong contingent from Oscott including two (at least) from my Diocese of Brentwood (Michael & Paschal) and I also met at least one Seminarian from Wonersh. This is so important and a great witness to lay people to see priests and seminarians on the march. Of course many priests had First Holy Communion Masses (including my own PP) but I still saw Fr Marcus Holden from St. Bede's, Clapham and Fr Hugh Mackenzie among others. I was quite surprised that only a very small number of protesters turned up this year as last year there seemed to be loads present. They were quite nasty, screaming and spitting - but you always find this demonic rage about these people coupled with an unreasonableness which seems totally illogical. I think they could be summed up by this video clip, where a member of the march asks one of the protesters if she wanted to explain her position, several others jump in and tell her not to get into a conversation, one can only assume because they know they can't win!

There are a number of further videos available on March4Life's Facebook page if you want to get a feel for the day, which, I want to stress was extremely positive. The pro-life cause is a no-brainer for Catholics and yet so many I meet are completely oblivious to the daily slaughter of innocents that goes on throughout the world. If Catholics would only wake up, we should have 50,000 or 500,000 at the March for Life next year. Why are Catholics apathetic? Because they need to see a lead being taken by their pastors and bishops!

The organisers; Ben, Sarah and Isabel worked so incredibly hard leading up to this event and on the day, their passion and enthusiasm was inspiring in and of itself. Their hard work needs recognition and the best recognition we can give it is by supporting this event. Sharing information on social media helps, but also take the videos into your school or parish to get the important pro-life message out there. Organise a group to attend from your own parish and get involved in the battle for life!

Support March4Life UK and find out more by visiting their website https://www.marchforlife.co.uk/donate/


ADVERTISEMENT FROM THE AUTHOR
If you use PPE, abrasives, tools, welding equipment or like gardening, please visit my website SCION SUPPLY LTD and consider making a purchase, or share the link with someone who does. I supply a wide range of products at extremely competitive prices, like this new environmentally friendly and easy way of weeding you patio or driveway! 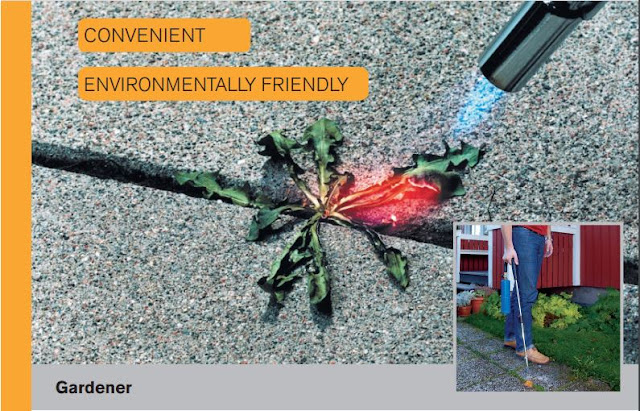