The Worrying Rise of Secular Intolerance 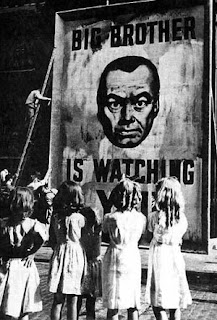 Over the weekend I read this article on the rise of secularism. It looks at the way that society in Britain is developing towards a secular majority which promotes a kind of equality & tolerance which accepts no dissenters -- I have to say that fear of this continues to grip my heart in a growing way. I find daily that even switching on breakfast TV or listening to Radio 4 projects a diet of pro-abortion, pro-homosexual, pro-transgender ideology directly into my home in a way that really is most disturbing. It is disturbing because it is radical, becoming normalised and is constantly promoted despite the fact that no one understands what potential consequence such radical changes in family norms will have on society.

This new "tolerance" comes with a disturbing sub-text. Dr Sharon James, a social policy analyst at the Christian Institute (CI) says that “intolerant secularism” among a small but “hard core” group is gaining traction in the UK, with one of the main battle grounds being education. “There seems to be what I would call a hard secularism,” she explains, “and the way that is manifesting itself is that, when we come to the schools’ issue, parents are being told at the moment: ‘Of course, we believe in freedom, so of course you can believe what you want in the confines of your home, but you know what, when your children get into school we, the State, have the right to re-educate them, and we are going to re-educate them according to our secular values.’ Now, that is not a tolerant secularism that is a very intolerant secularism and it’s effectively threatening the privacy of the family, as well as freedom of religion and conscience.”

The article also reports that Christians in the medical profession have found “conscience exemptions being eroded” and that campaigning by secular groups such as Humanists UK is becoming more effective.

The argument that Christianity & morality should be a private affair is increasingly common, even within families. The position argued is somewhat inevitable when society abandons God. It is that we live in a representative democracy, so morality - what is right and wrong, is arbitrary, malleable and subjective, and is decided by Government collectively through Parliament. (This avoids the duress of pressure groups and forms a "broad view"). Secularism argues that moral norms change and move with societal culture and, let's face it, morality moves especially fast these days! Whether something is moral is a personal question and not a judgement to be applied to, say education for example, as in the case of schools starting to teach gender theory to five year olds and noramlise homosexuality, IVF, surrogacy, etc, etc, etc. Fundamentally the state's position is that once your child enters the education system, you lose any right to dictate their education whatsoever - but so does everyone else, equally!

I don't know if it all sounds a bit like a Communist state approach to you? It does to me, and it sounds very much like the end of fundamental freedoms like the freedom of religion.

The biblical teaching which most clearly relates this lesson is the Genesis account of the Fall. Humanity reaches to be God, for the fruit of the tree of the knowledge of good and evil; a symbol of the power to determine for themselves the moral standards of right and wrong. Disorder in the world begins with confusion of the mind about God's commandments. The serpent insinuates "You can become like God by disobeying God". Craving replaces reflection, they desire what God has forbidden them and, as a consequence their eyes are opened in a way they could never have anticipated (3:7; cf. 3:5-6). Their minds turn inward and they are overcome with self-absorption manifest by their shame in each other's presence, fear in the Lord's presence (hiding), and guilt over their behaviour dominate their lives.

This story sets the scene for the whole human drama that ensures and continues to this day with the examples given above. God's first question is recognisable as the anxious call of a parent in search of their child who has not come home when expected or may have fallen into bad company: "Where are you?" (3:9). Does this divine appeal not echo throughout the ages? It is a question which introduces a dialogue between God and every person who reads the Scriptures from the beginning. The biblical narrative describes not our search for God, but rather God's search for us, as we hide in fear and self-preoccupation over the very possibility of His being real; of His finding us (3:8-13). God's response to sin is not rejection, but promise. He asserts His intention to free humanity from the tyranny of the serpent (which symbolises the intelligent, personal nature of evil) in the proto-evangelium.

Once again I have to return to my constant hobbyhorse of asking where our bishops are? This threat is aimed at the very building blocks of our society and threatens our fundamental freedoms, the Bishops of England and Wales are facilitating it and encouraging it.

Where they should be is speaking out in an intelligent way against this ideology and giving priests and laity the tools and support to fight this. Take this recent GMBTV interview for example:

Morgan purports to be Catholic. Willshaw was a Head Teacher in my Diocese of Brentwood before going to work for OFSTED. What do you think of Wilshaw & OFSTED's argument here?

How does the Muslim apologist come across?

What mistakes does he make and where could he do better?