Let us not fall into temptation... 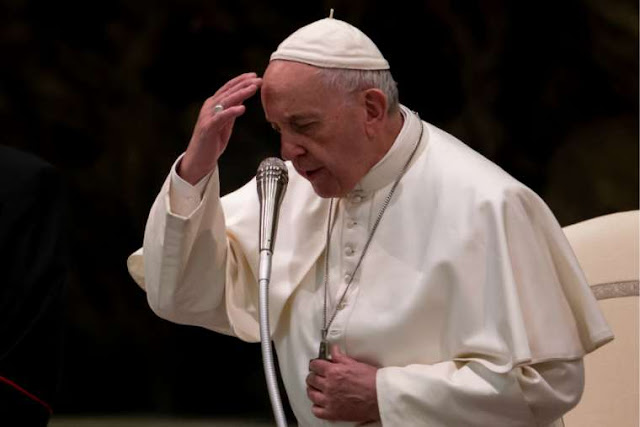 The Pope has authorised changed to the Italian translation of the Our Father.

The new wording was approved by the general assembly of the Episcopal Conference of Italy last month. It will appear in the third edition of the Messale Romano, the liturgical book that contains the guiding texts for Mass.

The Pope said in 2017 he believed the wording should be altered and on the face of it, it is not hard to see why; the Pope argues that


“It is not a good translation because it speaks of a God who induces temptation. I am the one who falls. It’s not him pushing me into temptation to then see how I have fallen. . .It’s Satan who leads us into temptation, that’s his department”

I'm sure we can all see where the Pope is coming from, but quite a lot of Catholics are not happy. Take Fr Tim Finigan for example:

My dear lay people, I am sorry to retweet this filth, but I just wanted to reassure you that you really do not need to scruple about saying the Our Father with the words you were taught as a child. Use them to pray for the Church. https://t.co/486BR3k2yF
— Fr Timothy Finigan (@FatherTF) June 10, 2019

Father Tim gives us more detail on his blog where he explains:


What is unfamiliar to us is that in the 16th century, temptation also had a wider meaning of testing or trial. Nowadays we would not generally be understood if we used the word in this wider sense.

Understanding the narrowing use of the word “temptation” also helps us to understand the phrase “lead us not into temptation.” We know that God does not entice us to sin, allure us to evil, or lead us into any feelings or desires that will cause us to sin. If we know that “temptation” in 16th century English can also mean test or trial, it is easy to see that when we pray “lead us not into temptation,” we are asking God not to put us to the test or lead us into a time of trial. (We don't need to change the translation of "lead us not" - to propose that is to miss the point.)
If we want to meditate on this clause of the Our Father, we might consider the example of Our Lord in the garden of Gethsemane. He was subjected to the greatest trial and testing, that of taking on His own shoulders the sins of the world. In His anguish, he cried “My Father, if it be possible, let this chalice pass from me” (Mt 26:39) and then added “Nevertheless not as I will, but as thou wilt.” He was put to the test and asked the Father to spare Him. We ask the same in the Lord’s prayer, knowing that sometimes the answer will be “No.”

Interestingly, the noted British classical scholar Dr. Mary Beard has also found herself puzzled by the Pope's decision as she notes here. Her problem is that the Pope says it is a "bad translation":


Mark [the evangelist] is pretty clear here, and it is along the lines of the old version. Pope Francis may not like it theologically, but it looks as close as you can get to the earliest (Greek) version we have.
‘Not a good translation’ indeed! Doesn't say what I want it to, more like.

She has a good point, doesn't she? We can't just change the words of Jesus because they do not sound right to the modern ear. Indeed I would suggest this sets a very dangerous precedent! Surely there is more to be gained by the fostering of an approach which guards the original version, explains that it needs to be read with hermeneutical guidance, and teaches the correct understanding? I would go as far as to say it presents us with an opportunity for evangelisation even?


Please check out my website for a wide range of hand and power tools and welding equipment: