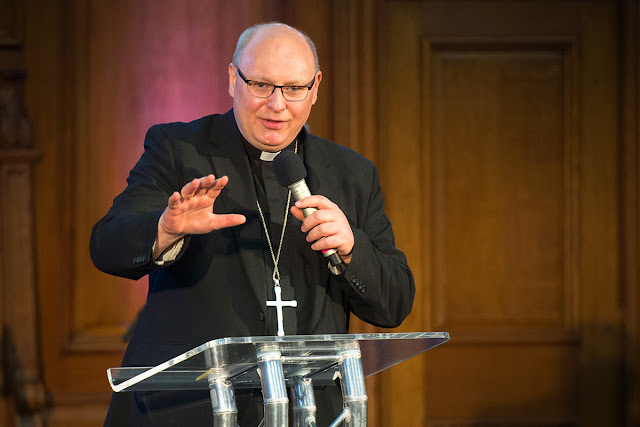 At 11am this morning it was announced that John Wilson, up to now Auxiliary Bishop of Westminster, had been appointed Archbishop of Southwark by Pope Francis (his installation is to be on the 25th July at St George's Cathedral). This is an extremely important appointment for England and Wales and has taken quite a few people by surprise it seems.

The archdiocese has an area of 3,000 km2 (1,200 sq mi) and covers the London Boroughs south of the Thames, the county of Kent and the Medway Unitary Authority. The Metropolitan See is in Southwark where the archbishop's seat is located at the Metropolitan Cathedral Church of Saint George The see is currently administered by the Most Reverend Peter Smith, LL.B., J.C.D.

++Smith has been largely inactive in Southwark for the last ten years or so, as were his two predecessors (both of whom are still living) which means the archdiocese is desperately in need of some inertia. It is widely rumoured that ++Smith was on a personal count-down to retirement! Clearly +Wilson is highly thought of, he has only been a bishop for four years and not had his own see yet although he was administrator of Leeds Diocese for two years. Considering Southwark was ++Smith's third see, one might have considered he brought some not inconsiderable experience to the position, but the consensus seems to be that he's been pretty rubbish.

By contrast, the word is that +Wilson is really one of the most competent bishops we have. Plus, Southwark were looking for a younger archbishop which means that Wilson fits the bill. Wilson was born on 4 July 1968 in Sheffield, South Yorkshire, England. He studied at University of Leeds, where he graduated with a bachelor's degree in theology and religious studies. He then undertook studies for the priesthood at the Venerable English College, Rome. During his seminary training he completed a Baccalaureate in Sacred Theology at the Pontifical Gregorian University and a Licence in Moral Theology at the Accademia Alfonsiana.

He was ordained to the priesthood on 29 July 1995 for the Diocese of Leeds. After doing pastoral work from 1995 to 1999, Wilson began teaching moral theology at Ushaw where latterly he served as Vice-Rector; he also completed a PhD at Durham University.

In 2005, he was appointed Episcopal Vicar for Evangelisation in the Diocese of Leeds, a role he held until 2012. From 2008 to 2014 he was also sessional chaplain at HMP Leeds. In 2011 he was named a Chaplain to His Holiness by Pope Benedict XVI. During the vacancy of the See, he was elected Administrator of the Diocese of Leeds by the College of Consultors from September 2012 to November 2014. From 2015 to 2016 he served as Parish Priest of St Martin de Porres, Wakefield.

He is also the only CBEW bishop who has attended the March for Life for the last couple of years (Bishop John Keenan from Paisley was also present).

Please pray for Bishop Wilson as he takes up this important role.

If you use tools or gardening equipment or know someone who does, please check out my website: