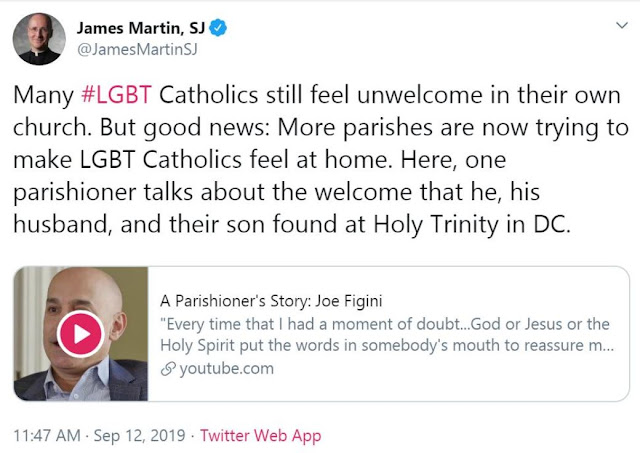 I had to wonder if this crossed a bit of a line - there was certainly a strong reaction on social media. But Martin has been doing this for a long while, and he doesn't just push it with LGBTQ issues, he challenges lots of Catholic ideas: 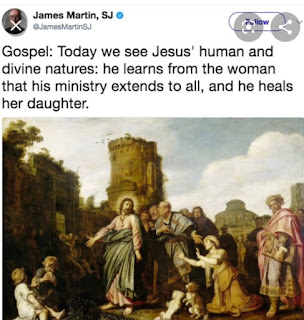 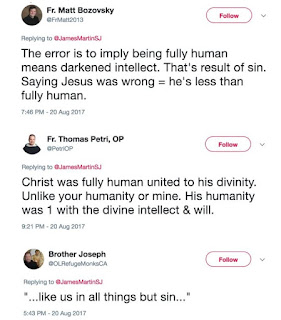 Jim doesn't care. They're all just haters. And he has the Vatican backing him! And anyway, those who argue with him are all gays anyway!

Anyway I wonder if his "gay "marriage"" Tweet prompted Archbishop Chaput to write this warning to the faithful about Martin's lies?

Whether it was or not, it did seem to create a bit of a watershed moment. Suddenly bishops were endorsing Archbishop Chaput's post:

I believe Archbishop Chaput has provided a helpful caution to Catholics about what Father James Martin discusses in his talks, social media posts and writings. Here is my full statement. https://t.co/wurGoxdpry
— Bishop Paprocki (@BishopPaprocki) September 19, 2019

And priests were joining in too:

Even priests from England:

This is a phenomenal and in my opinion unprecedented response from a bishop to his faithful on how to respond to error. In this case the sometimes confusing and uncatholic teaching of Fr James Martin SJ. I think priests and laity would love it if more bishops spoke like this! https://t.co/MgVBa6hcPG
— Fr Tom Smith (@frtomsmith) September 19, 2019

Even Chris Stefanick got involved

https://t.co/nqDSr4QvIk
If RULES is all you ever hear from Church, it’s probably because the voice in your head is speaking more loudly than the preacher. Listening requires REAL SILENCE. & that’s hard.
“Listening, like teaching, is an act of the will.” +Chaput pic.twitter.com/iIp7oQj5Kf
— Chris Stefanick (@ChrisStefanick) September 20, 2019

I think the response on line demonstrates how frustrated & troubled the faithful have been with his constant and deliberate trolling of the faith. Once one man in authority stands up, it's interesting to see other clergy back him.

Martin's mendacious response shows no sign of contrition or any recognition of the concern and confusion he breeds. His critics are wrong, and anyway, the Vatican backs him. He states it, publicly.

There's no doubt that Chaput is one of the good guys, overlooked again at the last dicastery for a Cardinal's hat, clearly because his orthodoxy is out of favour with Pope Plane Chatterer, but I do feel it's a low key response to someone of whom Chaput says:


I want to extend the CDF’s caution to all the faithful of the Church in Philadelphia, regarding the ambiguity about same-sex related issues found throughout the statements and activities of Father James Martin.

You have to wonder why Martin is allowed to continue?

Abp. Chaput has twice allowed the perfidious James Martin SJ to speak in his archdiocese. Why not put your money where your mouth is & ban @sjmartin from speaking on diocesan property?

When the Archbishop talks of "ambiguity", I feel frustrated. James Martin is not ambiguous and Archbishop Chaput's statement goes on to catalogue some fairly damning examples of Martin contradicting Church teaching.

It doesn’t matter if @JamesMartinSJ:

What matters for your job is whether he is leading souls astray.

In fact, I think the statement made responding to Archbishop Chaput by the excellent Bishop of Springfield is concise and offers the faithful great clarity:


“Archbishop Chaput has provided a helpful caution to Catholics about Father James Martin. On the one hand, Father Martin correctly expresses God’s love for all people, while on the other, he either encourages or fails to correct behavior that separates a person from that very love. This is deeply scandalous in the sense of leading people to believe that wrongful behavior is not sinful.

“Father Martin’s public messages create confusion among the faithful and disrupt the unity of the Church by promoting a false sense that immoral sexual behavior is acceptable under God’s law. People with same-sex attraction are indeed created and loved by God and are welcome in the Catholic Church. But the Church’s mission to these brothers and sisters is the same as to all her faithful: to guide, encourage, and support each of us in the Christian struggle for virtue, sanctification, and purity.

“This matter is not one of opinion, it is our Lord’s own teaching, as we hear in Luke’s Gospel: ‘Take heed to yourselves; if your brother sins, rebuke him, and if he repents, forgive him.’” (Luke 17:3)

However I do feel Archbishop Chaput's statement is soundly Catholic, deeply pastoral and sensitive and offers clear reasoning from Catholic doctrine:


When people hear that “the Church welcomes gay people” or needs to be more “inclusive and welcoming” without also hearing the conditions of an authentically Christian life set for all persons by Jesus Christ and his Church — namely, living a life of chastity — they can easily misunderstand the nature of Christian conversion and discipleship.

For this reason, Catholic teaching always requires more than polite affirmation or pro forma agreement, particularly from those who comment publicly on matters of doctrine. Faithful Catholics who are same-sex attracted need support and encouragement in the virtue of chastity. They deserve to hear — as all people do — the truth about human sexuality spoken clearly and confidently. Anything less lacks both mercy and justice.

++Chaput is a true bishop and my mild frustration is only really because I feel we have moved beyond charity some time ago with these issues. The damage Martin does is real and needs to be dealt with by his superiors. The Church either teaches something or it doesn't, there is no grey area. We need to have the courage to get behind the teaching in confidence that it is true and we can preach it with love and with sensitivity, or we might as well give up. What ever way you look at it, people who hold Martin's position are saying that humanity has evolved beyond the Church's settled teaching on human sexuality. I strongly feel this is a perfidious lie, because as Archbishop Chaput points out in his statement, any ideology that states sexuality is at the heart of human identity is creating a false anthropology based on desire. This is fundamentally at odds with what the Church teaches and continues to teach about μετάνοια (conversion). As the Archbishop states:


"Any implication that a person’s behavior is predetermined, and that intellect and free will have little role in the formation and control of his or her sexual appetites, is both false and destructive, especially to young people."


"The suggestion that the wisdom of the Church, rooted in the Word of God and centuries of human experience, is somehow cruel or misguided does grave harm to her mission. Families have been destroyed because of this misperception, and Father Martin regrettably contributes ambiguity to issues that demand a liberating biblical clarity."

Imagine you are a devout Catholic parent with a child with SSA. You love them and support them and teach them (as you have all your children) that sex is something within marriage only and ordered to the procreation of children. What is Fr Martin doing if he is not fundamentally undermining your formation of that child as a parent? It is shameful and damaging and he must be stopped.