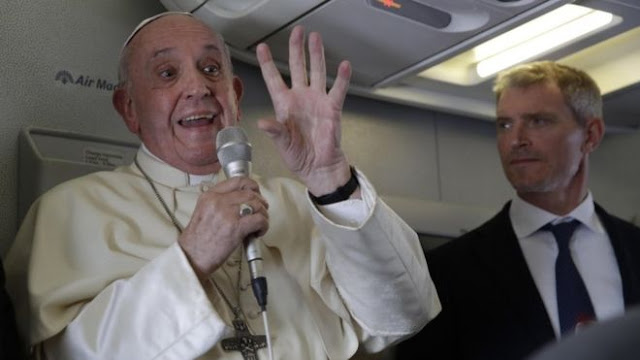 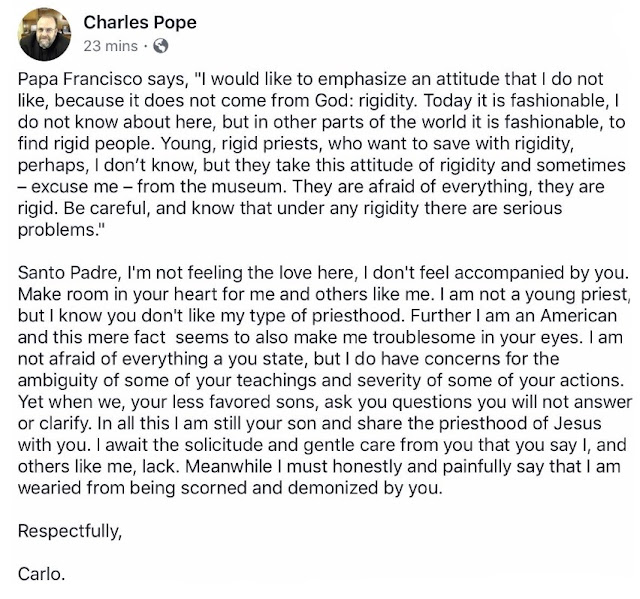 This public comment from Msgr Pope, a much read and well loved priest of the Arch Diocese of Washington, was prompted by the Pope's latest plane comments on his journey home from Africa. As a son abandoned by a father who chose immorality over paternal duties, I recognise the tone of these comments - they are as a wounded child to his father, trying to understand the abandonment.

I sense this is a feeling millions of Catholics are feeling as this papacy rages on, seemingly completely unstoppable. Pope Francis' rampage appears all powerful, with no one even interested in commenting. This always strikes me as a stark contrast with Pope Benedict XVI, who, it is told once exclaimed to Bishop Fellay who seized the opportunity to remind the Pope that he is the Vicar of Christ, possessed of the authority to take immediate measures to end the crisis in the Church on all fronts. The Pope replied thus: “My authority ends at that door.” (Castel Gondolfo August, 2005)

In frank comments to reporters aboard the plane returning to Rome from a trip to Africa, he said he was not afraid of a schism. Some of his critics had allowed political ideology to infiltrate religious doctrine, he said. What does that mean? Especially coming from the most political pope we have ever seen in the Church. It seems frankly inconceivable to me that any pope would speak of one of the very worst things to happen to the Church in the way this Pope is speaking of possible schism. "I am not afraid of schism"?? This is the very antithesis to his role:


The Pope, Bishop of Rome and Peter's successor, "is the perpetual and visible source and foundation of the unity both of the bishops and of the whole company of the faithful." LG 23, CCC 882

When considered in the context of his comments in 2016 where he was reported as having said:


“It is not to be excluded that I will enter history as the one who split the Catholic Church.”

...one might even consider he sees schism as some sort of plan for his papacy?

On the plane, he states:


"I don’t fear schisms, I pray they don’t exist because there’s the spiritual health of many people [to consider], right? [I pray] there will be dialogue, that there will be correction if there is some mistake, but the path of schism is not Christian."

Of course, these comments just seem bizarre in the face of the Pope's refusal to even discuss the dubia. Who has refused dialogue with his critics more than he? He says that his critics should visit him, yet has refused audiences with the dubia Cardinals for three years! How can we take what he says here seriously? How can faithful US Catholics be causing a schism when the Pope courts shamanism in the Amazon and Islam in the East while muddying the moral waters throughout the Church, confounding canonists, cardinals, priests and deacons - not to even mention the poor lay people. The Pope does not decide who goes to heaven, and yet Pope Francis acts like he gets to choose; he can change the deposit of faith to whatever he likes with complete impunity.

Here's EWTN's Raymond Arroyo responding to what he called the Pope's "canard": the alleged 'American cabal' trying to 'undermine Pope Francis'. Honestly - it is clear and factual and really must be watched!


To see the damage the Pope is doing for yourself, just check out how the world's media are reporting the pope's latest comments:

“Ideological fixation, not ‘loyal criticism,’ feeds possibility of schism, pope says” (Catholic News Service)
“Pope Francis says he welcomes constructive criticism” (Catholic News Agency)
“Pope Francis Defends Himself and Discusses ‘Schism’” (National Catholic Register)
“On American critics, Pope says he doesn’t want a schism but he’s not afraid of it” (Crux)
“Pope: we have fewer children because we are too attached to individual well-being” (Vatican News)
“Francis warns of ideology ‘infiltrating’ some quarters of US Catholic Church” (National Catholic Reporter)
“Pope says he prays U.S.-led schism can be thwarted” (Reuters)
“Pope to UK: Obey UN resolution to hand over Chagos Islands” (Associated Press)
“Pope Francis on plane: ‘I am not afraid of schisms. I pray they do not happen.’” (America)

"Pope says he;s not afraid of schism in the Catholic Church" (CNN)
"Pope Francis accuses critics of stabbing him in the back" (BBC)

All I can think is that God is giving us over to ourselves in these times. I've heard a lot that we get the pope we deserve. I say brace yourselves; it could well be that things will get a lot more confusing and frustrating for those who look at the whole of Church teachings rather than just the "latest teachings".

We might have to get a lot more prodigal before we have consolation Graces are gifts that have to be accepted, you have to work with God to enact them. I suspect more and more that someone is not cooperating with Grace, and by extension God, and that is why at the highest level we don't see the protections normally seen for the particular office.