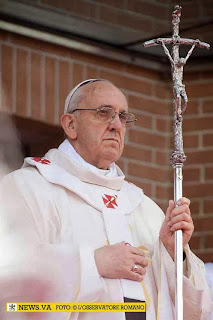 Last week, Pope Francis made this much reported remark:

“Do I love God or dogmatic formulations?”

We might be tempted to think that the false opposition and sentimentality implicit in the question is characteristic of modern Jesuits. And no doubt it is, of some of them.

However, as the Catholic Scholar ‎Peter Kwasniewski‎ shows in his latest article at LifeSite, Francis's statement sharply contrasts with the views of five major modern Jesuit theologians:

This article contains quotations from all five in which they show why (in the words of one):

Pope Francis continues to demonstrate his unsuitability for the role of Supreme Pontiff, Kwasniewski‎ frames this recent comment as part of...


the pope’s regrettable habit of indulging in false oppositions — dogma against love, theory against practice, principles against reality, tradition against progress, and many other pairs — not only is repugnant to the instinct of the faithful and their “supernatural common sense”, but does not even align with the best thinking of modern Jesuits on the absolute value of rational and dogmatic truth and the serious peril of embracing or surrendering to error, which, if major, cuts us off from God and salvation as effectively as moral turpitude or hatred for our neighbor does.

Pope Francis has said he doesn't care about theology - this is evident from his rhetoric. He doesn't seem to like or care for the Church much, especially those who love it. He is far happier engaging in quips and off-the-cuff rhetoric, innuendo, gossip and whispers. I wish I did know what he did care about!