The Appropriation of Cardinal Newman 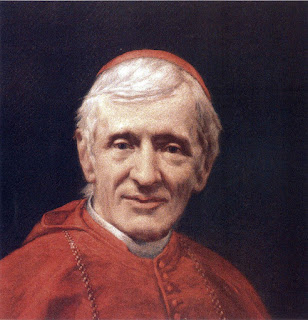 I've just about had enough of this.

The priest that our Pope meets with, seeks counsel from, and legitimizes ladies and gentlemen.

Why does everything with James Martin have to be about homosexuality? As Tyler states in his tweet — this is the man the pope chooses to meet with, to promote, to legitimise, and he is speculating about the sexual preferences of a celibate man so holy he is about to be canonised. It's not just massively inappropriate, it's frankly FILTH!

But Gay Jim isn't the only one seeking to appropriate Newman's canonisation for their own agenda.

This is complete twaddle:

“The spirit of Newman is hovering over the synod gathering as it seeks out new pathways for the 21st century Church.” Fascinating @ctrlamb iv with Newman expert Mgr Rod Strange on the surprising connections between the #sinodamazonico and the English saint. @The_Tablet
— Austen Ivereigh (@austeni) October 12, 2019

I think the odious Parolin has been drinking

Parolin: Newman is “a model for Anglicans and Catholic” due to his sanctity, life and trust in the Holy Spirit

The cardinal describes #JohnHenryNewman as “one of the great forerunners of modern ecumenism”
— Christopher Lamb (@ctrlamb) October 12, 2019

Newman has also been appropriated to further a political agenda in the Brexit debate. Fr Ignatius Harrison, who is Provost of the Birmingham Oratory and the Actor of Newman’s sainthood cause, says that the English cardinal was wary about closing off religion into any national identity.

“If you want me to stick my neck out: I think Newman would have been a remainer,” he said while speaking to reporters in the Vatican today.

So Newman is a Gay, liberal, Remainer who was totally into ecumenism, would NOT have converted today, according to one Irish Bishop and basically would be 100% behind Pope Francis. Have any of these people actually read any Newman??? Newman called Anglicanism "memetic" and ultimately considered it an empty parody of Catholicism. He also identified Anglicanism with the semi-Arians, how could he have possibly improved his view of them since then with women priests and helter-skelters and circus performers in their cathedrals? Anyone who has read Newman knows this is patent nonsense, not to mention a huge slur on converts, especially the Ordinariate.

As to Jim Martin's grubby and inappropriate appropriation, it smears the truth & holiness of this great man reducing it to the level of his own sinful preoccupation. It seems to me typical of the man that he is so small minded that he can only see through the lens of his own anachronistic experience. In his eagerness to paint Newman with his own sinful brush, he betrays the truth and plays as always to the lie that, at the heart of the human person is their sexual identity. Martin's query is well answered in this article which states:


The saints’ burial places became the focal points of the nascent Church. And in the Early Church, the faithful wanted to be “buried near the saints” [ad sanctos].
The practice of burial ad sanctos shaped the history of the Christian Church for centuries to come. It was a practice inscribed in the Annals of the Christian Year. Newman was intimately familiar with, and imaginatively rooted in, these sources of Christian community, recorded in the lives of the Saints and remembered in the Church’s Breviary...


In dying, Newman sought to enter the world of St Gregory and St Benignus. He wanted to be buried ad sanctos. He believed that nobody became a saint on their own. He believed not only that Father Ambrose St John was a saint, but that he had become a saint and given his life through the stress of overwork, in translating from the German Father Fessler’s account of the First Vatican Council of 1870.

Conversion cost Newman everything in this world, his position, reputation, pension, etc. He was said to have responded when questioned on this "What is all that compared to one Holy Communion?"

His willingness to give up everything in pursuit of truth should be the key point of departure for his canonisation. Such a sacrifice requires great faith and great humility. I wish these people would see that the truth about Newman is that he found his way only when he looked back to the Fathers and found the Catholic faith there. Lord I plead that the Synod Fathers in Rome might have the wisdom to look to his saintly example for guidance in their deliberations & not blindly innovate & enforce unnecessary novelties on your Church!