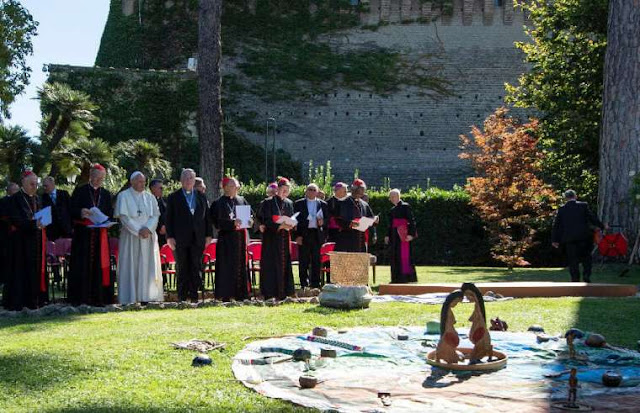 After days of prevarication it has finally been made clear that the Pope allowed pagan worship in the Vatican and Catholics (even Franciscans) took part.

This is wrong. Do Bishops not care? If they take their vocations at all seriously, something needs to happen now. Remember, this is the Pope who moved the papal Corpus Christi procession out of Rome, but allows idol worship in the Vatican.

Syncretism is deeply and inextricably Masonic.

Fr. Giacomo Costa, a communications official for the Amazon synod, said Wednesday a wooden figure of a nude pregnant woman, which has been present at events related to the synod, is not the Virgin Mary, but is instead a female figure representing life.

“It is not the Virgin Mary, who said it is the Virgin Mary?” Costa said Oct. 16 at a press conference for the Amazon synod, a meeting taking place in the Vatican Oct. 6-27 on the ministry of the Church in the region.

Costa referred to a controversial image of a female figure which was part of a tree-planting ceremony in the Vatican Oct. 4. The same figure has been present in the vicinity of the Vatican at various events happening during the synod, under the “Casa Comun” initiative.

The wooden figure of a pregnant woman has been described as both a Marian image and as a traditional indigenous religious symbol of the goddess Pachamama, or Mother Earth.

When told “many people have said” the woman is a figure of the Virgin Mary, Costa added “‘many have said,’ okay, as you like, but I have never heard that.”

“There is nothing to know. It is an indigenous woman who represents life,” he stated, adding that his information commission will look for more information about it, but “it is a feminine figure” and is “neither pagan nor sacred.”

“Fundamentally, it represents life. And enough. I believe to try and see pagan symbols or to see... evil, it is not,” he said, adding that “it represents life through a woman.” He equated the image to that of a tree, saying “a tree is a sacred symbol.”

Ruffini said that interpretation is his personal opinion, and he was not speaking as the head of Vatican communications or synod communications.

He added that “We know that some things in history have many interpretations” and he would look for more information about the image and inform journalists about what he finds out.

Cristiane Murray, vice director of the Holy See press office, added that more information about the wooden figure should be sought from REPAM or the organizers of the events where the image has been present.

REPAM (the Pan-Amazonian Ecclesial Network), a group backed by the bishops’ conferences in Latin America, describes itself as an advocacy organization for the rights and dignity of indigenous people in the Amazon. The network is involved in operations for the synod assembly and is one of 14 groups on the organizing committee of the Casa Comun initiative, which is promoting more than 115 events hosted by a loose network of groups, connected in varying degrees to the Catholic Church.

At #SinodoAmazonico #AmazonSynod Presser, on the naked pregnant statue which has featured prominently at this Synod, Fr. Giacomo Costa SJ, Secretary of the Information Commission says "it is an indigenous woman who brings life"; adding "nobody said it was the Virgin Mary" pic.twitter.com/Gk3ZSDDBnS
— Catholic Sat (@CatholicSat) October 16, 2019

"The only objection to Natural Religion is that somehow it always becomes unnatural." GK Chesterton.


I worry that, due to repeated abuses in sometimes small, and sometimes larger doses, the faithful - even those who seriously practice the Catholic religion - have become numb to the sheer gravity of what is happening in Rome at this time. An idol of a false god, belonging to a pagan false religion, is now being venerated, carried through the Eternal City in procession, and named in ecclesiastical documents. This is an evil way beyond
anything I could have imagined. I never thought I would see such a thing.

This is the danger to our souls: we see such images, feel mild indignation, consider it to be just another one of the many odd things happening in the current climate, shrug our shoulders and move on. All the while we become evermore numb to just how completely insane things have become. I repeat, a false god and its idol is currently being venerated in Rome, with consecrated religious and clerics recently prostrating before her in the Vatican Gardens. This is completely mad.