The Vatican is investigating how $200m in Swiss bank accounts controlled by its central administrator ended up financing a luxury property development in London that generated large profits for a company that managed the investment. According to an article in the highly reputable Financial Times, in addition to forking out £168 million for the equity, the Vatican has also taken over £100 million of debt.

The project to construct 49 luxury apartments at 60 Sloane Avenue has become the focus of an investigation by Vatican police into the financial activities of the Holy See’s Secretariat of State, the custodian of millions of dollars in charity given by Catholics around the world, according to multiple people familiar with the probe.

The Vatican became involved in the Chelsea project in 2014 when $200m held in Swiss bank accounts controlled by the Secretariat of State was transferred to a Luxembourg investment fund called Athena Capital.

Athena is owned by the Italian London-based financier Raffaele Mincione through his company WRM. Athena had bought the Chelsea building for £129m in 2012 and then sold a minority stake in the project in 2014 to a fund it managed on behalf of the Vatican as a sole client.

In 2018, the Vatican bought out the remaining equity in 60 Sloane Avenue from Athena. Mr Mincione’s vehicle earned around £130m from the project overall.

These revelations are further to Vatican police raiding the Secretariat in search of evidence about the project, after which they suspended five employees pending the results of its investigation & seized documents and computers as I reported here (see the Church Militant videos at the bottom of the post).

According to the article the Holy See’s investment with Mr Mincione was personally authorised by Cardinal Giovanni Angelo Becciu, who met the London-based financier inside the Vatican. Becciu was one of the highest officials at the Secretariat of State until 2018, when Pope Francis made him a cardinal and put him in charge of the office for the canonisation of saints.

At the time of his elevation to Cardinal, the Whispers in the Loggia blog reported:


Francis' choice of the Sardinian's successor as Sostituto of the Secretariat of State – essentially the Vatican equivalent of the White House Chief of Staff.
A lifelong diplomat who most notably served as Nuncio to Cuba before taking up the Curia's "nerve-center" post under Benedict XVI, as Becciu ceases as Parolin's deputy upon his receipt of the red hat, the choice of his replacement in the all-important role is expected within very short order.


On Monday Domenico Giani, commander of its Gendarmerie police force and chief of the pope’s personal security detail, stepped down because of the leak to Italian media earlier this month of a document from his office revealing the names and photos of the suspended employees.

CNA reports that in 2016, Becciu was instrumental in bringing to a halt Vatican financial reforms initiated by Cardinal George Pell. Although Pope Francis had given the newly created Prefecture for the Economy autonomous oversight authority over Vatican finances, Becciu interfered when the prefecture planned an external audit of all Vatican departments, to be conducted by the firm PriceWaterhouseCooper.

Unilaterally, and without permission of Pope Francis, Becciu cancelled the audit and announced in a letter to all Vatican departments that it would not take place.

In 2017, Becciu was also responsible for the dismissal of the Vatican’s first-ever auditor general, Libero Milone.

Becciu has also been directly quoted as being on-side with Pope Francis' controversial pro-homosexualist agenda.


Milone was fired in dramatic fashion by Becciu, who accused the auditor of “spying” on the finances of senior officials, including Becciu. The then-Archbishop Becciu threatened criminal prosecution of Milone if he did not agree to leave his Vatican office quietly.

Milone maintained that he was fired for being too good at his job, and because he and the reforming work of the Prefecture for the Economy were perceived as a threat to the autonomy and business practices of long-time Curial officials. He said that he was dismissed on trumped-up charges after he uncovered evidence of financial misconduct under Becciu’s leadership.

In May 2018, the Vatican quietly announced it had dropped all charges against Milone.

Also in 2017, Becciu was involved in a complicated chain of events with the Sovereign Military Order of Malta that ended with the Grand Master of the Order being deposed, and Becciu being installed as special papal envoy charged with running the order.

At the centre of that controversy were allegations that Vatican financial authorities had siphoned off more than 30 million euros from a 120 million euro bequest held in a Swiss bank account, in order to ease liquidity problems.

Athena Capital first purchased 60 Sloane Avenue in 2012 for £129m with a £75m mortgage from Deutsche Bank that was later refinanced with a £100m loan from hedge fund Cheyne Capital.

In November last year, the Vatican Secretariat sent an official to London to meet Athena Capital and negotiated the buyout of the fund’s 55 per cent stake in the building at 60 Sloane Avenue.

After a complicated asset swap that involved the Holy See transferring £40m to Athena as well as other assets owned by Athena on its behalf, the Vatican took control of the property. In addition, it has taken over the £100m debt attached to the project.

The $200m originally invested by the Secretariat with Athena in 2014 was worth around £128m at exchange rates at the time. If that is added to the £40m paid to Athena in 2018, the Vatican ended up buying Mr Mincione’s equity in the Chelsea building for £168m.

That would mean Mr Mincione made a £128m profit after the £40m he originally invested in 2012.

WRM said that the profits it made by selling a minority stake in Mr Mincione’s building to the Secretariat in 2014 were based on an independent valuation conducted by CBRE, and that the value of the building had sharply appreciated along with other prime London real estate from 2012 to 2014.

The FT article is behind a paywall, but here's a screen shot: 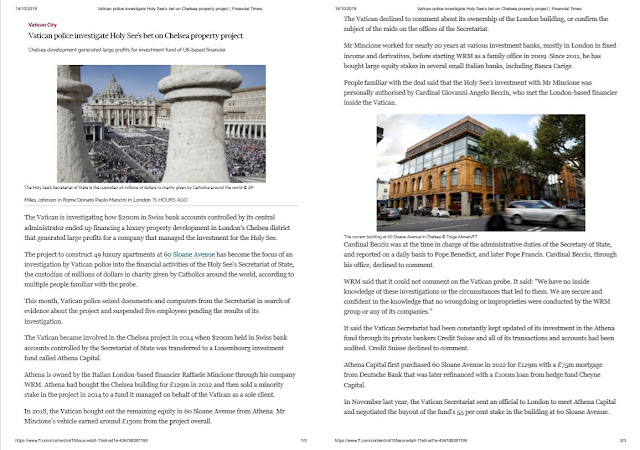 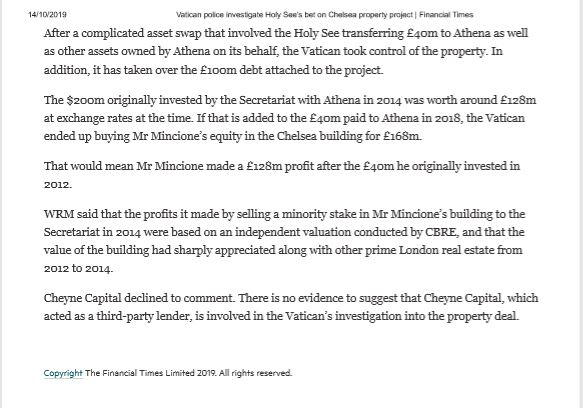 Interestingly, Damian Thompson was the first to break all this and has been asking why the mainstream media have not been all over it for days now. He discusses it with Fr Alexander Lucie-Smith in this podcast which is a must listen: