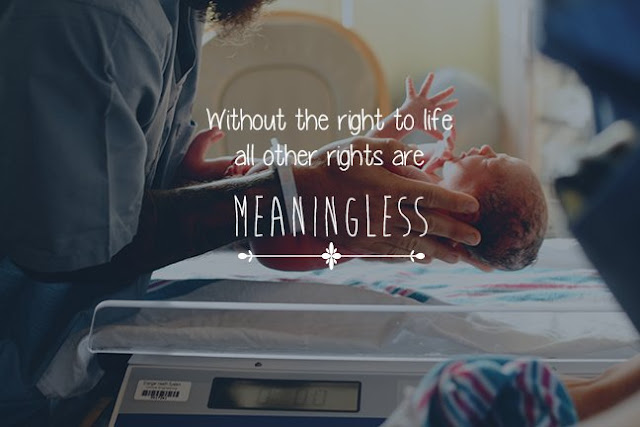 In the wake of the USCCB's re-affirmation of the pre-eminence of the issue of abortion in our society I have to say I was really sickened to find no mention of this issue in CAFOD's newly released Guide for Catholic Voters.

The article begins with this comment from Daniel Hale, Head of Campaigns at CAFOD, who says:


“The idea of having to go the polling station on the way back from our Christmas shopping isn’t something that will fill many of us with festive joy.

“But an election is one of the most valuable opportunities we have to bring the voices of our poorest sisters and brothers to people in power – making sure that they are not an ‘afterthought’, as Pope Francis has warned.
“Brexit is bound to dominate this election, but we need to make sure that the candidates asking for our votes are reminded that politics has to also focus on the other critical issues we face in our common home.”

The article continues to state four especially important election issues to raise with candidates and parties during this campaign as:
By removing the most fundamental right - the right to life - from the political debate, CAFOD are demonstrating once again, their lack of any real understanding of Catholicity. What use is aid, a better future for our climate or the elimination of domestic poverty if you are killed before you are born?

As the agency of the bishop's conference, it's little wonder we hear nothing from CAFOD on what is undoubtedly THE preeminent issue for Catholics at election time. What effect can such an obvious exclusion have but to convince lay Catholics that this matter is subjective?

As an organisation which proclaims itself as proudly Catholic which draws its' mission and value "directly from Catholic Social Teaching" this is an unforgivable omission.

Mind you, when they employ the services of so-called theologians like Tina Beattie, who has called for abortion to be "early, safe and legal" one might not be quite so surprised. These sorts of things make a mockery of the faith the Bishops are supposed to defend and teach, a faith which has clear moral boundaries and teaches an objective truth.

One of the major frustrations about pro-life political activism in the UK is that it is normally seen as a non-issue – the question is so settled that politicians don’t even mention it. If we, as Catholics, fail to mention the vulnerable & the unborn, how will politicians ever know how important this issue is to us? It should be the key criteria when selecting a representative!


One thing we know for certain about this election is that nothing is certain. Seats which are traditionally held by one party may change, as issues such as Brexit cut across traditional political lines. These factors mean that several prominent pro-life MPs are fighting to defend perilously small majorities. Conversely, there’s a chance that some anti-life MPs could lose their seats. In this election particularly, it really does matter whether or not you vote, and who you vote for. Of course, it may be that in your constituency, there really isn’t a candidate you can vote for in good conscience. But that doesn’t mean you shouldn’t engage – you can tell your candidates that their support for anti-life practices lost them your vote.

It’s never been easier to make your vote count. SPUC has the voting records of all MPs who are standing for re-election. We also provide questionnaires and guides for you to question your candidates and you can contact us to find out what information we’ve collected already on the voting intentions of the other candidates in your constituency. You can also check out Where Do They Stand’s website, as well as BPAS’ handy list of who not to vote for.

Unborn children, the disabled and vulnerable need our help now. We cannot fail them on 12th December!

Read more on the importance of the election from SPUC here.

Independent polling by Savanta ComRes shows reveals that:
The abortion lobby has made it clear that they will be seeking to introduce an extreme abortion proposal in the next Parliament, most likely as an amendment to the Domestic Abuse Bill.

Diana Johnson announced her intention to hijack the Domestic Abuse Bill, in the previous parliamentary session, with a radical amendment to introduce extreme abortion legislation to England & Wales.

Constituents are being encouraged to visit www.righttolife.org.uk/bothlives where it takes 30- seconds to ask their candidates to sign the Both Lives Pledge.

A spokesperson for Right To Life UK, Catherine Robinson said:

“We are very excited to be launching this campaign as the UK faces what is one of the most important elections for life issues in a number of decades. Our analysis shows that of the 75 MPs that have stood down ahead of the general election, 55 had a predominantly pro-abortion voting record.
“In the next Parliament, the abortion lobby will likely be back in full force, pushing to introduce new extreme abortion legislation.
“The Both Lives Pledge outlines three policy changes that are designed to increase protection for babies in the womb and end pregnancy discrimination for women. These are policies that will save lives by protecting and supporting both mother and child.”

Right To Life UK has launched a major general election campaign – the Vote For Both Lives campaign – a large-scale initiative that will be run throughout the country in the lead up to election day on 12th December.

An analysis of the voting records of the 75 MPs that have decided not to stand again for election, shows that 55 (73%) had a predominantly pro-abortion voting record during their time in parliament.

Oh - and if you're wondering about the "Seamless Garment" reference in the title of this blog, read this explanation.