There is a new Catholic celebrity who has suddenly been thrust into the spotlight. Alexander Tschugguel, 25, also recently organized March for Life in Vienna. He has announced that he is the man who threw the idols into the Tiber.

So many people seem to be so grateful to this brave young man. The internet is alight with praise and thanks for his actions. That seems a very natural reaction to me. Anyone who holds a sincere Catholic faith and is blessed with any small depth of Catholic understanding will necessarily have found the pagan idolatry at the Vatican over the Amazonian Synod very disturbing.

The Catholic Church asks us to believe what it teaches, to hold Sacred Scripture as truth and to believe in the Trinity. And yet, apologists for this papacy, faced with clear and obvious worship of idols inside Roman Churches, and despite having their own allusions to these idols being representations of the Visitation overturned by Vatican officials, turn on the young Catholic who actually did what everyone of faith should have done who was in chucking distance!

It really is hard to see how anyone can defend what happened in Rome, it is baffling to see a few loonies putting up any sort of defence of this...but they are!

Predictable: the Amazonian figurines were thrown into the Tiber by a young “anti-globalist” Austrian who dreams of restoring “Catholic culture and traditions”, & oh has a website where you can help “lead our fight against any enemies of our Church”. https://t.co/8fQhgo0H53
— Austen Ivereigh (@austeni) November 4, 2019

Yes, I know folks, the Amazon Synod is over and the initial hype has vanished, but, actions like these cannot stand—ever. Between the outright admission of the thieves involved in stealing these statues and this latest travesty, all Catholics should be justifiably outraged.
— Rich Raho (@RichRaho) November 5, 2019

Anyone following these people will have noticed that they've spent years now going on about forgiveness, that forgiveness seem conspicuously absent when discussing this event. I ask you though, if you were even vaguely aware of what it means to be Catholic, could you not at least have a shred of sympathy with Mr. Tschugguel?

The "cleric" Rich Raho is referring to in this tweet is Fr. Hugo Valdemar Romero who has posted a video of himself publicly burning three cardboard Pachamama idols. Fr Hugo is one of the most famous priests in Mexico, a current Canon of the Cathedral in Mexico City and the Spokesman for the Archdiocese of Mexico (Mexico City) for 15 years.


Here's a translation for the hard of Spanish: 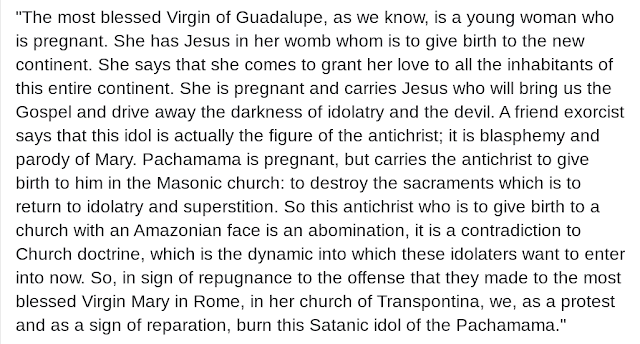 Even locally here, numerous parishes have held reparation for what's gone on:

I'm honestly not sure I have ever seen such a public outcry against something. That's good, but I wish there was the same sort of response to abortion. If we managed to get 1,000,000 Catholics to turn out for the March 4 Life, we might actually start to get somewhere!

Still I do think the fact that this happened actually in Rome, and involved Cardinals and Bishops (and the Pope himself) is an incredible scandal, one I really can't compute, but what it has done is totally confirmed in my mind that this Pope is pure scandal and nothing but a stumbling block. If you think it is no big deal, I can only think you don't take your faith seriously enough.

Alexander Tschugguel has been very busy and invited onto many of the Catholic commentators we follow with very positive overtones. Whether the Papal Tailgaters like it or not, we are also part of the Church of Jesus Christ, they can't chuck us out because we have a problem with idolatry!


We do have this faithful bishop as well, please pray for him: