One Pervert Too Far? 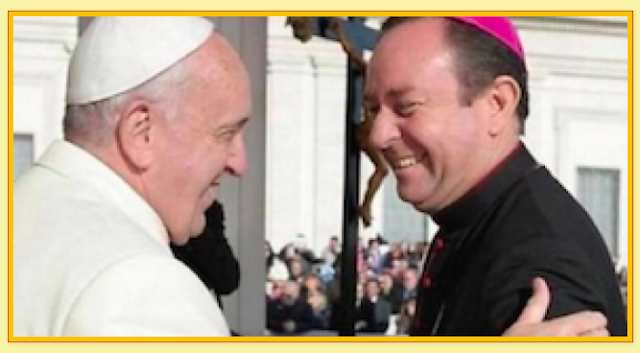 Do you recall Zanchetta The Pope's best buddy from Argentina who he made a bishop bypassing all canonical procedure in 2013?

Well he now has an international arrest warrant on his head for multiple sexual assaults on young men. The Vatican claims they were only made aware of these assaults a few months ago, but Associated Press heard back in January from Zanchetta's former Vicar General that the Vatican actually received information in 2015 and 2017 that an Argentine bishop close to Pope Francis had taken naked selfies, exhibited “obscene” behaviour and had been accused of misconduct with seminarians.

Francis allowed him to step down in 2017 for “health reasons,” but then named him to a senior Vatican administration position a few months later.

Francis acknowledged in a TV interview earlier this year that he asked Zanchetta about the initial accusation, involving nude selfies on the bishop’s cellphone. The pope said he gave Zanchetta the benefit of the doubt after he claimed his phone had been hacked.

He also insisted the bishop believes the prosecutor’s actions were aimed only at learning the truth, ”even when they could seem compulsive or repetitive without apparent motive.”

The Vatican insists the first accusation of actual sex abuse was only lodged against Zanchetta in late 2018. But The Associated Press and the newspaper Tribune of Salta have reported that documents and testimony from diocesan officials raised credible allegations of inappropriate sexual misconduct well before then.

Argentine prosecutors said last week that an order for Zanchetta’s capture had been requested because the bishop did not answer repeated phone calls or emails to be notified of the legal process against him.

The attorney’s statement Saturday said the bishop has been at the “residence indicated to judicial authorities.” That appeared to confirm that Zanchetta has been lodging at the same Vatican hotel, the Santa Marta, at which the pope stays.

Javier Belda Iniesta, the canon law lawyer for Bishop Gustavo Zanchetta issued a statement that the monsignor would arrive in Argentina on Tuesday and would fully cooperate with authorities.

How can we take the Pope seriously on abuse when he seems intent on employing most of the abusers at head quarters?

Looking for a Christmas gift for that handy person in your life who is always tinkering? Check out a wide range of tools and gadgets at Scion Supply Ltd