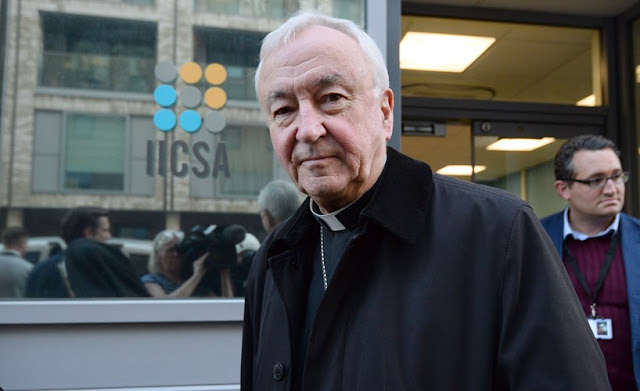 At the weekend, the Catholic Herald reported that 'LGBT Masses' Return to Britain. The story reports that


Masses for the LGBT community have returned to Britain, almost seven years after Archbishop Vincent Nichols ended them in Westminster

The article goes on:


there has clearly been a shift since 2012, when Archbishop Nichols (who has since been made a cardinal) said that, while it was important to give pastoral care to “people with same-sex attraction”, the Mass was a “universal” event and so it should not be restricted to a particular group. He also implied that Catholic sexual teaching was at odds with the beliefs of some LGBT activists.

This is not accurate however, as Cardinal Nichols had no intention of stopping the Masses, he simply moved the venue. You can read my full report on the consistent furthering of the LGBT agenda by the Cardinal from 2015 here.

The Herald picked up this story from Lifesite's report which I commented on and linked to here. It tells the sorry tale of precisely how our Catholic bishops are failing to make any sort of coherent, authentic, Catholic argument against the tide of secularism. Rather they are modernists in all but name, incrementally capitulating to secular pressure, listening to secular arguments and quietly agreeing with them and then giving way, without even a whimper of regret for the faith which they betray by such uncritical acceptance.

Back in June I reported on the Independent Inquiry into Child Sexual Abuse's investigation into Birmingham Diocese and I defended Cardinal Nichols. I watched the live stream of the hearing which took place in the previous December and my conclusion was - I quote from my report at the time:


He was honest, gentle and diligent and pursued abuse cases, he stopped payments to priests who were guilty. He didn't ignore or cover any up. Read the report yourself, you'll be hard pressed to find any wrong doing. The abuse cases took place over a long historic period. We now know no one knew how to deal with abuse in the 30's, 40's, 50's etc, is it really a surprise the Church didn't know either?
Credit where credit is due. On this I stand firmly with the Cardinal.

I was aware back then of other issues which were not part of that investigation, issues which have now come to light and are reported on by Lifesite in this video:


This brings to mind this tweet from the Cardinal in 2018 which I wrote about here:

To my mind one thing that disfigures the face of Christ in us today is the outpouring of bitterness, tittle-tattle, hostility and false witness that floods the digital world. https://t.co/wN7W5aGN3L
— Cardinal Nichols (@CardinalNichols) October 26, 2018

He doesn't like scrutiny and I understand why in the context of things like the LGBT "masses" - it shines a light on his hypocrisy, his double standards, his failure to provide a clear and consistent Catholic message.

Cardinal Nichols has a long history of pushing anti-Catholic, progressive theology, as I have documented here.

Going back to the Lifesite report, there was a lot of criticism when the Cormac story first broke in September 2018. If you don't remember, the angle was that the Pope had interrupted Cardinal Müller while saying Mass, back in 2013, to tell him to stop investigating a case concerning Cardinal Murphy-O'Connor. You may remember that there is strong evidence that Murphy-O'Connor is one of the main Cardinals who reportedly canvassed for Jorge Bergoglio at the conclave.

CONFIRMED: The Pope has blocked and inquiry on Cormac Murphy-O'Connor.

The accuser was a woman.

---
Of course he blocked it: Cormac was the founder of the St Gallen Mafia, which set in motion Benedict's resignation and Bergoglio's election. https://t.co/Wp46UqzV0d
— Rorate Caeli (@RorateCaeli) November 14, 2019

The Mass interruption anecdote was first published by the veteran Vaticanista Marco Tossatti, who has published on this new development today, stating the circumstances thus (forgive my poor translation if you are a fluent Italian speaker):


Both Bishop Philip Egan of Portsmouth and Bishop Peter Doyle of Northhampton testify that Cardinal Nichols forced them to refuse to issue a statement in support of a notorious victim of sexual abuse who was denigrated in the Catholic media as "not credible" and the his statements as "fantastic". Cardinal Nichols, testify the bishops, warned that any public statement issued by the bishops in support of the victim of abuse would be used to support the attacks on Pope Francis.

Both testify also, under oath, that Cardinal Nichols himself intervened subsequently to confirm this fear of his Conference's public relations agent and that it was the intervention of the cardinal to convince both bishops not to act in favor of the victim of abuse. In an e-mail that Bishop Doyle sent to the victim, quoted by the investigation, the bishop explained why he was now refusing to honor the victim's request to issue a public statement stating his credibility. Bishop Egan stated that "I saw it as an attempt to discredit the Holy Father, in reality, because at that time he was so connected to the Viganò affair".

The idea that Murphy-O'Connor was an abuser himself is highly unlikely, by all accounts I have heard. But the Cormac story isn’t a false flag. Though the abuse almost certainly didn’t take place allegations date to 1960s, when Cormac was in Portsmouth Diocese. The complaint by the woman, the refusal of ++Vincent, +Arnold & Westminster to follow the national investigation protocols is absolutely accurate, as is the story that Portsmouth & Northampton complained to Rome as we now know.

The real story isn’t the abuse but the refusal by ++Nichols & +Arnold to treat the allegations against the deceased Cardinal in the same way as they would for a humble Parish Priest. Not to mention that this inquiry has demonstrated that the Cardinal, despite all his protestations, was more concerned with the reputation of Pope Francis than the care of someone who had a credible accusation of historical abuse.

And the awful "Jihadi" John Arnold is one of the bishops noted in the Lifesite report for pushing the LGBT agenda in his diocese, where now things like this are happening -

Men in Drag story time for children hits UK libraries. You have until the 29th of November to voice your objection to Rochdale Council. Or do nothing and let it happen, it's your conscience to live with. https://t.co/TX6qFbJE2u
— Questioning LGBT/CSE Education (@QuestionLGBTedu) November 13, 2019

Do you think we will see a Catholic stance from him on this that protects families and children?

Oh what a tangled web we weave when first we practice to deceive!

I am happy to stand up for clergy when they do the right thing, as I hope I have demonstrated. Now it has come to light that ++Nichols & +Arnold did not follow protocol and sought to cover up the investigation in order to protect Pope Francis and we have it on record, will there be suitable repercussions, or will we see the Catholic hierarchy simply drawing the curtains as usual?

And for the record, I fully endorse this message:

.@cardinalnichols couldn't help himself expressing his disdain for @LifeSite at the @InquiryCSA