Cardinal Sarah: There is no misunderstanding between us 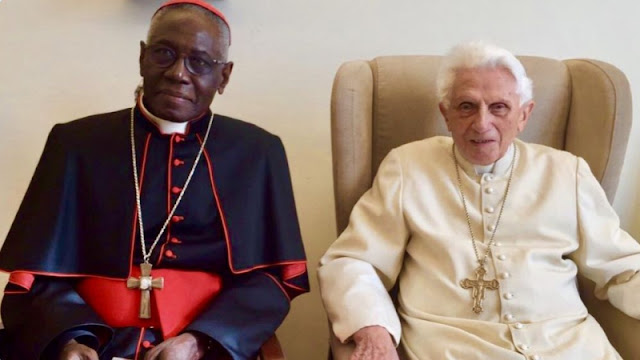 Cardinal Robert Sarah has again made a public announcement in respect of his new book which caused so much controversy last week (see my post here). In a series of three tweets, the Prefect for the Congregation of Divine Worship lambasted those who have weaponised the book launch as engaging in "nauseating and deceptive controversies" I have translated his tweets from the original French and embedded the originals for your information here:

Because of the incessant, nauseating and deceptive controversies that have never stopped since the beginning of the week, concerning the book From the Depths of Our Hearts, I met Pope Emeritus Benedict XVI this evening. With Pope Emeritus Benedict XVI, we have seen how there is no misunderstanding between us. I came out very happy, full of peace and courage from this beautiful interview. I call you to read and meditate From the Depths of Our Hearts. I warmly thank my editor, Nicolas Diat, as well as the house Fayard, for the thoroughness, probity, seriousness, and professionalism which they have shown. Excellent reading to all!

It's particularly interesting that the Cardinal has referred to the book by it's original title despite the intervention of Archbishop George Gaenswein.

+Gaenswein has asked that Benedict XVI's name be deleted from the introduction & conclusion of the book on the priesthood and celibacy. He said Benedict knew his text would go into the work but wasn't aware of the book's precise form and presentation
https://t.co/lZ1t1Q9EAY
— Edward Pentin (@EdwardPentin) January 14, 2020

As Steve Skojec of One Peter Five pointed out earlier this week, it appears that  +Gaenswein has basically been caught trying to serve two masters. As Antonio Socci reported, it would seem that this book hugely undermines a cynical move to introduce married priests.

Another shoe just dropped, although I think it jibes with what I've said here. Vigano is accusing Ganswein of being Benedict's gatekeeper, and not in a flattering way.
— Steve Skojec (@SteveSkojec) January 16, 2020

Archbishop Carlo Maria Viganò has accused Gänswein of “abusively and systematically” exercising control “towards the Supreme Pontiff Benedict XVI, ever since the beginning of his pontificate.”

Given that Pope Francis has himself defended the norm of celibacy, while wondering whether widened exceptions are possible it really seems extraordinary that the publication of this book has caused such a furore. And far from criticising Pope Francis, Pope Benedict and Cardinal Sarah write “in a spirit of filial obedience, to Pope Francis.” It does seem both Pope Benedict XVI and Cardinal Sarah are well aware just how partisan the Church is today and just how toxic orthodox positions have become: “We want to remain aloof from everything that could harm the unity of the Church,” they write in the introduction.

Whatever went on within Vatican walls, the external furore was whipped up by the usual Pope Francis fans, men like Austen Ivereigh who has doggedly pursued this story all week with a clear agenda to make Cardinal Sarah and Pope Benedict look like enemies. He's still at it:

Woke up with thought that, after one of most undignified Vatican episodes in years, Card. Sarah has no awareness of harming Francis or Benedict; no regrets or second thoughts; no sense of committing any mistakes … just an overwhelming sense of righteousness & victimhood. https://t.co/p1cd5BHmNJ
— Austen Ivereigh (@austeni) January 18, 2020

Of course, papal authority only works where the pope speaks in concert with the bishops. The fact that there are bishops here making their voices heard against a potential change shows us that:
1. A change is possible
2. There is concern amongst the bishops regarding the proposed change.
As Matthew Schmitz writes in First Things, “In today’s Church, any clear affirmation of orthodoxy is interpreted as a challenge to the authority of Pope Francis”. Think about that for a second. It says everything you need to know about this papacy.