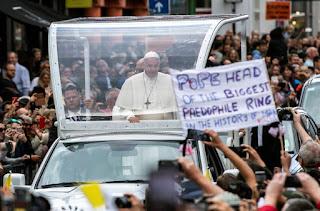 In a recent post on Lifesite, Dr Joseph Shaw shares some incredibly important insights into the abuse crisis which has engulfed the Church and which continues to damage it.

Catholic clerical sex abuse of minors has become a mainstream tenet of our society. A favourite "joke" for comedians like Ricky Gervais and Jimmy Carr, who seek to denigrate the faith. The perception for many outside the Church is that Catholicism is synonymous with abuse. How incredibly sad and damaging is that?

I don't blame them, I blame the perpetrators and the men who allowed it to happen and still allow it to happen. In my personal experience, this is because, at best, they fear for what will happen to them if they tell the truth. They prefer not to cause a fuss and hope that it will all die down in time. In some instances they fear a witch hunt. At worst, they are complicit.

In his blog, Dr Shaw distinguishes three layers to the problem: the cover-up; the refusal to face the sociological reality of the gangs; and, most fundamentally, the assumption that the crimes were not real, or not serious, because the victims must have consented.

"This is where we are with the Church. Sure, there are good priests & good bishops. But they knew what was going on. The ones who made a huge fuss about it the moment they became aware of the issue were thrown out of seminary for 'rigidity' long before they could make a positive difference. We are left with the ones — to generalise — who kept their heads down."

The point, Shaw says, is that the good guys, insofar as they exist, are impeded in their ability to act now because they did not act then. They have the uncomfortable feeling that they are being hypocrites. I should imagine there is also a danger that should they act now, they might impugn themselves for their inaction then.

Shaw also talks about the elephant in the room. He says the reality about the nature of the perpetrators, which dare not speak its name, is homosexuality.

"It is perfectly obvious that the vast majority of clerical abusers chose adolescent boys as their victims when, as has now happened, lists of perpetrators and victims appear in reports. And yet, not only do bishops not want to talk about it, but the secular media can be relied on to play along. Meanwhile, non-mainstream Catholic media have understandably made this a central talking point.
This is a problem because it looks as though bishops are either completely out of touch with reality or are carving out special protections for homosexuals. How can one hope to cure a disease if the doctors refuse to notice the symptoms?"

The final aspect Shaw highlights is this: the bishops didn’t think they were really crimes. They thought they were consensual, or were mere peccadillos, and that they needn’t get involved...except to cover up.


"Bishops, seminary rectors, and others in authority did not believe that sexual relationships were really bad for seminarians and priests, and they did not think victimised minors and other vulnerable people were seriously harmed. They had imbibed these attitudes from fashionable secular psychological theories. This is what will have to change if clerical abuse is to be curbed."