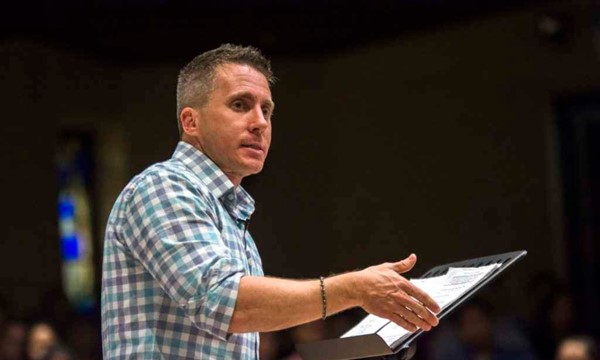 Following this recent story about Jason Evert having a number of talks cancelled in Ireland due to the counter-cultural nature of his message, and Ireland's head-long descent into hellish darkness, Jason himself has appeared on the Patrick Coffin show and spoken about the events.

Initially I was quite critical of the fact that Bishop Alphonsus Cullinan had refused to speak to Irish media about the situation. It seemed to me that this was missing an opportunity to speak up for Catholic teaching in an area which is all too often ignored and where young people especially, desperately need information and guidance: a counter narrative to help them form a balanced perspective given all the brain washing that goes on about sexuality and the Church from the secular media.

In my follow-up post, I considered what I had learned after speaking to some members of his diocese who seemed impressed with the bishop's commitment to the faith and his work to develop the diocese. Bishop Cullinan has made efforts on a number of fronts. He clearly recognises there is a huge problem in Ireland and something has to be done to restore the faith and engage with the secular narrative.

I concluded (as an experienced catechist) that although the Bishop is doing something, the plan seems rather superficial. Current literature coming out of the U.S. (where practically all of this work takes place) states time and again that stratification and youth ministry consistently fails. Current thinking is that family support ministry tends to be much more successful (see this article from Christian Smith which substantiates this thinking).

As I noted in that post, the Bishop's use of Alpha appears to show a lack of understanding. Alpha is one resource suitable for "far evangelisation" - non-Catholics/non-Christians who are interested in learning more about the message of Christianity. Even if people only "self identify" as Catholic (i.e. not necessarily practice their faith in any meaningful way) they are not likely to be interested in attending Alpha unless they are looking for community.

In fact there are many other Catholic resources (such as The Ministry of the Wild Goose, Landings, Catholicism, etc.) and Christlife which is being used elsewhere in Ireland. Father Stephen Wang's Sycamore programme is gaining traction with take up as far away as the U.S. As a home-grown programme it is often received really well and replaces Alpha which is sometimes criticised because it lacks a Sacramental dimension. Youth 2000 in Ireland has initiated the Catechetical Institute from Franciscan University and they are having a study day in June in Dublin. Their menu of workshops now number 73! Bishop Cullinan's pastoral letter does not shed any light on their plans apart from those most commonly known (Alpha and Youth Ministry). It appears designed to appeal to the masses insofar as, from a catechetical perspective, it seems superficial, poorly thought out and sporadic.

I am completely aware that this might be down to a lack of support for Bishop Cullinan from any number of places. The Irish bishops seem to be dis-unified, the deeply problematic ACP is also a factor. From my own experience, I know how bad things are in Ireland (although there are pockets of resistance, and green shoots thank God!). My point really is that I don't want to attack the one bishop who seems to be doing something in an extremely hostile environment! His job is likely difficult enough!

Jason, very diplomatically I feel, explains in the interview that Bishop Cullinan told him the Irish media will twist anything said to cause a problem for the Church. The Bishop considered the smartest strategy was to lay low and find the right moment. Jason explains that +Cullinan has worked hard to make the talks happen and is taking a strategic view on the ban. This is all good, but I am with Patrick when he says "When will be the right time?". This sounds like a cowardly excuse from +Cullinan to me.

What is clear is that Catholic teaching is toxic in Ireland which can only lead you to conclude it is NEVER HEARD! There are clearly perceptions about what it actually is but these perceptions are false. This has to lead to the conclusion that the bishops are simply not doing their jobs on any level!

Anyway, the whole purpose of this post is to recommend this interview, especially if you are concerned in some way about the material Jason speaks about in his talks. The problem is this message frightens people and so many have no idea what the Church believes or teaches, or ever speak to their children about these issues. And let me assure you that your children are talking about these issues and forming their own opinions with or without your input!

What the Catholic Church offers is truth, so let's pray that Jason gets back over to Ireland very soon and gets to preach his message of authentic love to as many people as possible.