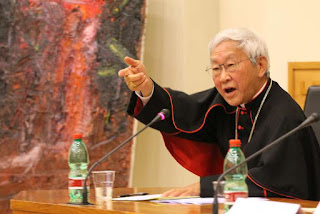 Matt Hadro of CNA spoke to Cardinal Joseph Zen, the bishop emeritus of Hong Kong, on the 11th February. Zen said that the situation of the Church in China is dire. The cardinal also predicted the end of the underground Church.


“I’m fighting Parolin. Because the bad things come from him, he is so optimistic about the so-called ‘Ostpolitik’, the compromise. But you cannot compromise with the Chinese Communist Party, who are persecutors of the faith. They want complete surrender. That’s communism.”

Zen was speaking at the offices of U.S. Congressman Chris Smith (R-N.J.). After the meeting, Smith told CNA that Cardinal Zen “is a Saint Paul of our time, who is not only a holy and an effective witness for the Gospel of Jesus Christ, he is also a man of great truth about what is really happening in China.”

I think it's criminal that Zen has to spend this time fighting the Vatican instead of being "an effective witness for the Gospel of Jesus Christ".
Cardinal Pietro Parolin Cardinal Zen China