February 05, 2020
George Neumayr, author of The Political Pope and the man who famously confronted a gaggle of American Cardinals in Rome, makes an important point in The American Spectator while commenting on Archbishop Carlo Maria Viganò's latest intervention. He reminds us that, although Cardinal Sandri has been chosen by the Pope to be "pilot of the next conclave secundum Franciscum" (a scandalous choice, given he is utterly compromised, having played a role in covering up the monstrous misdeeds of Marcial Maciel, the Legion of Christ founder) Pope Francis has already put another Maciel acoylyte in a position of power and influence for the next conclave: Cardinal Kevin Farrell. 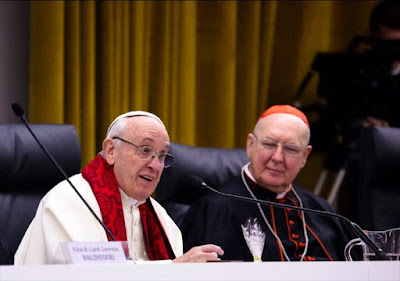 Farrell was promoted to camerlengo at the same time that his mentor Theodore McCarrick was defrocked.

Farrell, the head of the Vatican’s office of Laity, Life and Family, was consecrated as a bishop by McCarrick in 2001 after McCarrick was installed as Archbishop of Washington.

Farrell was a close collaborator with McCarrick during his time as the Cardinal Archbishop of Washington, DC, having served as McCarrick’s archdiocesan chancellor and living in the same house with McCarrick for six years. He has also said that he knew nothing about the misconduct of the late Father Marcial Maciel, although he also worked closely with Maciel in his days as an official of the Legionaries of Christ.

So what is it with the pope and men with dodgy backgrounds?

"Last year Pope Francis named Farrell to the position of camerlengo, which makes him responsible for the running of the Vatican during the period between the pope’s death and the next conclave. Farrell has the distinction of having covered up for not only Theodore McCarrick, with whom he lived for five years (Farrell was one of McCarrick’s auxiliary bishops), but also Maciel, in whose order he once served. Farrell has unsuccessfully tried to downplay his association with them.

But he needn’t bother. The pope clearly doesn’t care. He prefers compromised subordinates, as that makes them easier to control. That was his modus operandi in Buenos Aires, too. He would surround himself with corrupt men whom he had rescued from various troubles, which would in turn make them fiercely loyal to him.

Farrell may even receive another promotion this year to the Congregation for Bishops, which would make him alongside Cardinal Blase Cupich the second most powerful bishop-maker in America. Farrell, Cupich, Joseph Tobin, Donald Wuerl — they all remain in power, despite their evil collaboration with Theodore McCarrick, which guarantees that the Gay Mafia will only increase in size.

Far from uprooting Vatican corruption, his supposed mandate, Pope Francis has cemented it in place, finding as many tainted and theologically liberal underlings as possible. In some cases, they are enablers of abuse. In others, such as the infamous case of his protégé Gustavo Óscar Zanchetta, they are abusers themselves. All the while Pope Francis lectures others on their self-serving practices and “crisis of credibility.”

To Viganò, the pope’s selection of Sandri puts a cap on the pope’s hypocrisy — what Viganò calls a “flaunting” of the “most unscrupulous clericalism.”"

Now have another read through of my post from the other day. Hard to deny the logic don't you agree? What really worries me is how brazen the manoeuvring (which, no doubt, has always gone on to some degree) has become. It's not hard to see how men who deny the faith ended up in charge of the Catholic Church, the question is, can we do anything to stop them?

For me, the evidence against them is already utterly overwhelming. So overwhelming that I find it impossible to understand how anyone could act as an apologist for their evil. It's not just doctrinal corruption, it's not just apostasy, it hurts people, it hides and apologises for abuse. Totally unacceptable. This must stop!