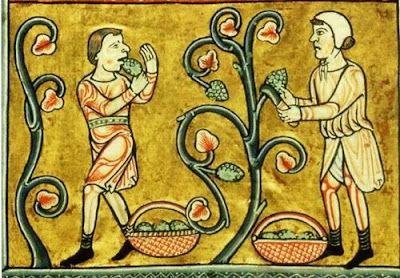 The theme of this Sunday's Gospel was obedience. As a fundamentally disobedient person, I reflect on this issue quite a lot!

In my parish, the homily yesterday reflected this theme: you can listen to it here.  In it my Parish Priest says that to obey means to submit my will to a higher authority. He quotes St Thomas in saying that "the road to holiness is our willingness to obey others." I have to admit that I can't find that reference, though I have looked, and St Thomas seems to say something different to me in Question 104 Article 5 of his Summa:

St. Thomas teaches discernment, and that we are to be obedient insofar as we are being obedient within the parameters of competence for any specific authority.
My Parish Priest's absolutely correct conclusion is that our God-given freedom to choose means that making the choice to be obedient to God is always the right decision, because He is not self-interested (St Thomas does address this in the article referenced above) and therefore that obedience leads us to happiness and it leads us to Him for whom we were created. I'm not sure I agree with the idea that it "hurts" to obey. I think it is a virtue, an honour and a privilege to obey an appropriate precept from an appropriate authority. It is an honour to serve a just ruler because in such service you are assisting in bringing about the good willed by that authority for the benefit of all. Although I recognise that we can be asked to fulfil a difficult or dangerous duty at personal cost.
When we all got home from Mass we all had a big discussion about Fr Kevin’s message, which seemed to be a bit too "keep your mouth shut and your head down, obey the bishop even if he spouts nonsense because – “obedience” is the first rule" to our hearing. This seems a bit close to the old notion of "pray, pay and obey!" which I have a fundamental revulsion of, partly I suppose born of mother's stories of her childhood in Ireland where the parish priest was treated as someone beyond criticism and the Church could be characterised as treating the poor with an almost predatory attitude on occasion. Also because I believe strongly that the teachings of Jesus are for all of us, to edify us, to lift us up, to inform and help us. Simply keeping quiet and doing what we are told does not resonate with my vision of Christianity!
Perhaps that's par for the course though. I’ve always been a rule breaker, someone prepared to “risk it”, I don’t give my loyalty easily or lightly. I think this was probably due to my experiences growing up. My wife is the best person at "keeping me in check" in this regard and often when I espouse some radical course of action, she will counsel me to be more circumspect.
In the Summa, St Thomas teaches that amongst our various possessions, whether goods of the body, or goods of the soul, it is clear that the human will is the most intimately personal and most cherished of all. So it happens that obedience, which makes a man yield up the most dearly prised stronghold of the individual soul in order to do the good pleasure of his Creator, is accounted the greatest of the moral virtues.
The obligation of obedience to superiors under God has its' limitations. We are not bound to obey a superior in a matter which does not fall within the limits of his preceptive power. Thus for instance parents, although entitled beyond question to the submission of their children until they become of age, have no right to command them to marry. Neither can a superior claim our obedience in contravention of the dispositions of a higher authority. Hence, notably, we cannot heed the behests of any human power no matter how venerable or undisputed as against the ordinances of God. All authority to which we bow has its source in Him and cannot validly be used against Him. It is this recognition of the authority of God vicariously exercised through a human agent that confers upon the act of obedience its special merit.
In the modern world, we often find ourselves in positions where we are subject to authorities which assert a corrupt authority over us. I have found myself in such a position on numerous occasions and discovered numerous deeply troubling and nefarious practices. In my experience, the authority does not appreciate you rocking the boat in such circumstances and such rocking tends to result in the removal of the rocker rather than any satisfactory investigation or resolution. Meanwhile those who are prepared to turn a blind eye, to accept that such practices are part of the process, who know how to keep a secret, are rewarded and promoted: treated as trusted confidents. Questioning the authority is not welcomed.
As Joseph Shaw recently pointed out:

“Is it an exercise of the virtue of obedience to obey a directive which exceeds the authority of the person giving it? No, because this would not be a genuine law. One can’t preen oneself on one’s obedience to fake laws. Obeying them is not a way to build up a virtue pertaining to respect for real authority.”

When I reflect on obedience, I think that the fact that in spite of my personal experiences I am willing always to submit in Christ & His Law says something about how much my faith means to me and how deeply it has convinced me of His truth. And yet the diocese, the Bishop’s Conference and even the Pope these days fail consistently to provide living examples of the Law.
In a related post, Shaw points out that the likes of Saint Augustine and Saint Thomas take a line which appears strict to contemporary ways of thinking but this is simply because the Saints assume that the authority is acting in the best possible interest:

if we regard our bishop — as we should — as exercising authority from God, and therefore undertake to obey him as a way of obeying God Himself, we could never imagine that this would involve disobeying God’s will. This does not only mean that we should not obey the bishop in breaking the Ten Commandments, but that it is not true obedience to carry out the bishop’s desires, should he harbor them, to harm souls in any way.

I long for a leader I can follow with confidence, but, if I follow someone I know is corrupt or seeking something contrary to the Gospel, I am complicit in that corruption. Evil is a privation of due good, so if someone commissioned with a duty fails to execute that responsibility, that is an evil. More on this in my next post!