October - Month of the Most Holy Rosary 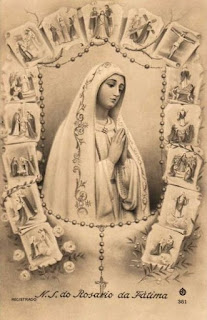 The month of October is traditionally dedicated to the Most Holy Rosary, a most powerful weapon against Satan and all Evil Spirits.

"We do not hesitate to affirm again publicly that We put great confidence in the Holy Rosary for the healing of evils which afflict our times. Not with force, not with arms, not with human power, but with Divine help obtained through the means of this prayer." Ven. Pope Pius XII

According to an account by fifteenth-century Dominican, Alan de la Roch, Mary appeared to St. Dominic in 1206 after he had been praying and doing severe penances because of his lack of success in combating the Albigensian heresy. Mary praised him for his valiant fight against the heretics and then gave him the Rosary as a mighty weapon, explained its uses and efficacy, and told him to preach it to others.
"Since the prayers of the Rosary come from such excellent sources — from Our Lord Himself, from inspired Scripture, and from the Church — it is not surprising that the Rosary is so dear to our Blessed Mother and so powerful with heaven.

"If we consider the power of the Rosary as seen in its effects, we find a great abundance of proofs of its wonderful value. Many are the favors granted to private individuals through its devout recitation: there are few devoted users of the Rosary who cannot testify to experiencing its power in their own lives. If we turn to history, we see many great triumphs of the Rosary. Early tradition attributes the defeat of the Albigensians at the Battle of Muret in 1213 to the Rosary. But even those who do not accept this tradition will admit that St. Pius V attributed the great defeat of the Turkish fleet on the first Sunday of October, 1571, to the fact that at the same time the Rosary confraternities at Rome and elsewhere were holding their processions. Accordingly, he ordered a commemoration of the Rosary to be made on that day. Two years later, Gregory XIII allowed the celebration of a feast of the Rosary in churches having an altar dedicated to the Rosary. In 1671, Clement X extended the feast to all Spain. A second great victory over the Turks, who once, like the Russians, threatened the ruin of Christian civilization, occurred on August 5, 1716, when Prince Eugene defeated them at Peterwardein in Hungary. Thereupon Clement XI extended the feast of the Rosary to the whole Church.

"Today, when dangers far greater than those of the ancient Turks threaten not only Christianity but all civilization, we are urged by our Blessed Mother to turn again to the Rosary for help. If men in sufficient numbers do this, and at the same time carry out the other conditions that she has laid down, we have the greater reason for confidence that we will be delivered from our dangers." -- Mary in our Life by Fr. William G. Most 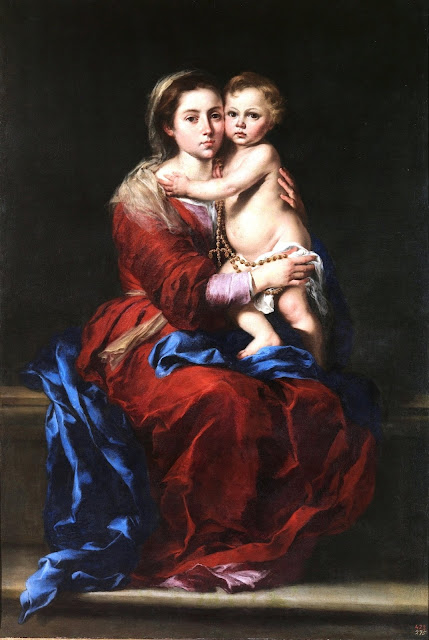 The Rosary & The Liturgical Year

The Rosary had its origin in the liturgical mentality of former ages. Even at the present time it is called "Mary's Psalter." There still are Catholics who consider the 150 Hail Marys a substitute for the 150 psalms for those persons who neither have the time, the education, nor the opportunity to pray the Hours of the Divine Office. Thus "Mary's Psalter" is a shortened, simplified "breviary" — alongside the common Hour-prayer of the Church. — The Church's Year of Grace, Dr. Pius Parsch

The Rosary is Christocentric setting forth the entire life of Jesus Christ, the passion, death, resurrection and glory. Of course, the Rosary honors and contemplates Mary too, and rightly so, for the same reason that the Liturgical Year does likewise: "Because of the mission she received from God, her life is most closely linked with the mysteries of Jesus Christ, and there is no one who has followed in the footsteps of the Incarnate Word more closely and with more merit than she"142 (Mediator Dei). Meditation on this cycle of Joyful, Sorrowful, Glorious and Luminous Mysteries makes the Rosary not only "a breviary or summary of the Gospel and of Christian life,"(Ingravescentibus malis) but also a compendium of the Liturgical Year. Therewith the Rosary stands revealed as a dynamic teacher and nurturer of Christian faith, morality, and spiritual perfection, fostering in various ways faith, hope, charity, and the other virtues, and mediating special graces, all to the end that we may become more and more like unto Christ. — Mariology, Juniper B. Carol, O.F.M. 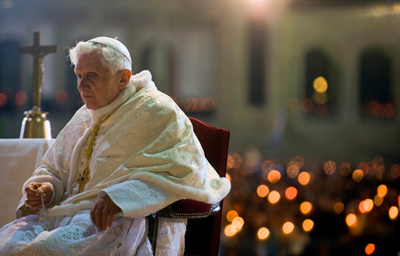 Pope Benedict XVI in an address at the Basilica of St. Mary Major where he prayed the rosary with the faithful said:
Today, together we confirm that the Holy Rosary is not a pious practice banished to the past, like prayers of other times thought of with nostalgia. Instead, the Rosary is experiencing a new Springtime. Without a doubt, this is one of the most eloquent signs of love that the young generation nourish for Jesus and his Mother, Mary. In the current world, so dispersive, this prayer helps to put Christ at the centre, as the Virgin did, who meditated within all that was said about her Son, and also what he did and said. When reciting the Rosary, the important and meaningful moments of salvation history are relived. The various steps of Christ's mission are traced. With Mary the heart is oriented toward the mystery of Jesus. Christ is put at the centre of our life, of our time, of our city, through the contemplation and meditation of his holy mysteries of joy, light, sorrow and glory. May Mary help us to welcome within ourselves the grace emanating from these mysteries, so that through us we can "water" society, beginning with our daily relationships, and purifying them from so many negative forces, thus opening them to the newness of God. The Rosary, when it is prayed in an authentic way, not mechanical and superficial but profoundly, it brings, in fact, peace and reconciliation. It contains within itself the healing power of the Most Holy Name of Jesus, invoked with faith and love at the centre of each "Hail Mary".
May we all pray the Rosary everyday as Our Lady requested at Fatima.
October Pope Benedict XVI Rosary